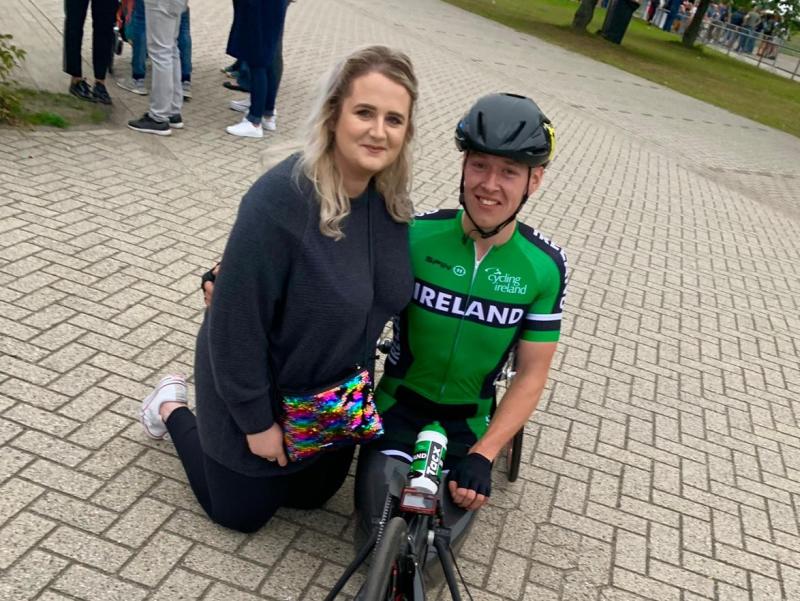 The fiancée of the latest Laois Paralympian hero has said they have been blown away by the support they have received, both in the lead up to the games in Tokyo and since Portlaoise man Gary O'Reilly won a bronze medal in the Cycling H5 Time Trial at the Paralympic Games.

Hazel Westman was talking to the Leinster Express today and explained that the whole extended O'Reilly family are so grateful for all the support that their hero Gary has received.

"We have got massive messages of support and encouragement from the local community, it has been great. His sponsors Midland Steel and everybody has been amazing and we have got so much help.

"I work as a nurse in the hospital and all the staff on nights were sending me pictures of them cheering him on and offering their support. The support has been amazing."

A bronze medal was an amazing achievement in his very first Paralympics but as Ms Westman explains, it is something that they didn't really expect.

"We are absolutely delighted. We weren't really expecting it to be honest and neither was Gary. We were hoping for it obviously but Gary had said a top six finish was what he was hoping for. To come away with a bronze medal was just unbelievable."

It was a nervous and emotional night and early morning for the family and the nerves almost got too much for her.

"Gary's family were all watching it together but I had to go home to my own house and watch it because I was so nervous."

Gary O'Reilly is back in action in the early hours of Tuesday morning at approximately 1.30am in the Men’s H5 Road Race for what will be his final event at the games and while his recovery time will be short, his fiancée is confident he can overcome some recent crashes and feed of the momentum of winning his first medal.

"It hasn't been easy for him. He has had a couple of crashes lately. He had a bad crash in Portugal a few weeks ago and then in Tokyo he had a crash when practicing so he has had road rash and lots of aches and pains but he is grand and looking forward to his road race now later tonight.

"I think the bronze medal this morning will motivate him even more now."

Gary O'Reilly is due home in Ireland on September 8 or shortly after it and no doubt he will get a heroes welcome. All of Laois will be hoping he can add a second medal tonight before he boards the plane to return home.

In Pictures: Gary O'Reilly is Portlaoise's king of the road in Tokyo

This article appeared in the Leinster Express back in September