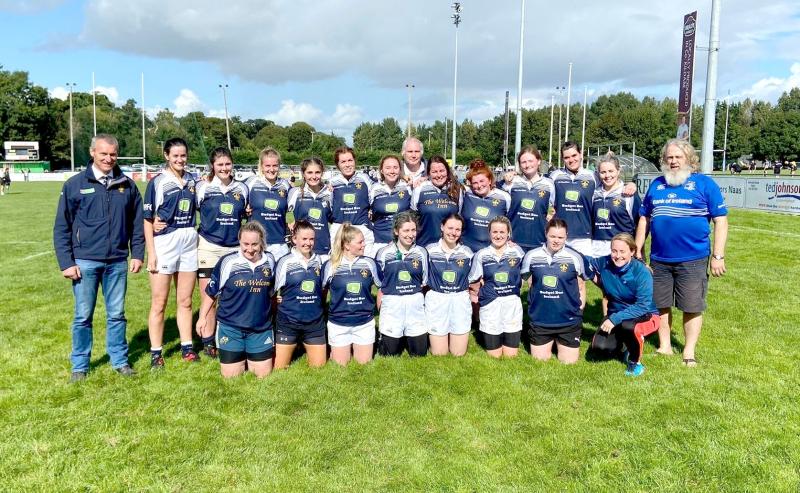 THE Portlaoise RFC Women’s team travelled to Forenaughts in high spirits on Sunday morning to take on Naas in perfect conditions in the semi-final of the Paul Cusack Cup.

Having beaten Clondalkin in the opening round at Togher two weeks earlier and having received a walkover from Enniscorthy a week later in the second round they were in good spirits and were ready for a stern challenge which Naas surely provided.

The early pressure paid off when Portlaoise won a penalty and Lynn O’Callaghan, who treated us to a fine display of line kicking, placed the ensuing kick deep into the Naas 22 for an attacking lineout. Portlaoise won the lineout cleanly and mauled strongly towards the Naas line.

After the maul was finally halted the Portlaoise runners off the side of the breakdown put the Naas defence under immense pressure causing them to concede a penalty about 15 metres out, in front of the posts.

Fullback Jenny Keegan stepped up and calmly slotted the kick giving Portlaoise a three point lead in the first quarter. Naas restarted and the remainder of the first half was played mainly between the two 22 metre lines with Naas trying to exploit space out wide through the slick handling and speed of their back division.

The Portlaoise backs, while not as smooth in attack, were a good match for the Naas girls in defence and they showed real grit and great line speed ensuring the Naas girls could not pierce the defensive line.

The game now settled into a pattern of Naas struggling to win quick ball and working to release their speedy backline with the Portlaoise girls meeting them head on in the tackle with the visitors' forwards frequently turning over Naas ball or slowing it down with excellent counter rucking.

The contact work of the Palmer sisters, Rosie and Yvonne, hooker Steph Gleeson, and back row forwards Rebecca Mullins and Emma Smyth was excellent and their efforts contributed significantly to keeping Naas at bay.

Portlaoise lost their captain, and one of their key lineout options, 20 minutes into the half through injury and for the last 10 minutes of the first half Naas gained a foothold in the Portlaoise 22. Finally, despite desperate defence from Portlaoise, after some fine multi-phase rugby Naas scored a try on the stroke of half time to leave Naas leading 5-3 at the break.

Portlaoise re-organised at half time and received the kick off. However, like Naas in the first half, they failed to clear their lines and allowed Naas into their 22. Naas then ran everything at Portlaoise and wingers Haley Fitzgibbon, Rachel Palmer and full back Jenny Keegan were all called upon to make try saving tackles.

Centres Ellen Booth and Patrycia Harasim ensured that the Naas runners were stopped in their tracks every time and eventually Naas conceded another penalty at ruck time in the face of ferocious Portlaoise counter rucking. This allowed Portlaoise to lift the siege and they commenced a forward orientated pick and go game which the Naas forwards were not able to counter.

The remainder of the game was played deep in Naas territory but they were equal to the task and held the Portlaoise attack at bay. Their defence was creaking however and they conceded three penalties in kickable positions but unfortunately Portlaoise were unable to convert any of them.

With time running out Naas had a player yellow carded for persistent fouling at the breakdown and Portlaoise made a final push for the line. Following several picks and goes second row Aoibheann Egan picked the ball from the base of a ruck and crashed over for the winning score, a fitting reward for her hard day’s work.

Portlaoise won this tough, hard game through their ability to impose their forward superiority on Naas. However, the game could have gone either way and when these two teams meet again in the league the result will be in the balance all over again.

For Portlaoise the backs had limited running opportunities but their defence was outstanding. Half back Sandy Keegan kept the pack moving forward and she posed considerable threat with her running game while Lynn O’Callaghan at 10 kicked superbly and kept the back line organised and effective throughout the game.

The pack excelled on the day and there were many candidates for player of the match but in a really close call flanker Emma Smith won the award after a particularly good performance.

What is the time difference and where can I watch the Ryder Cup?