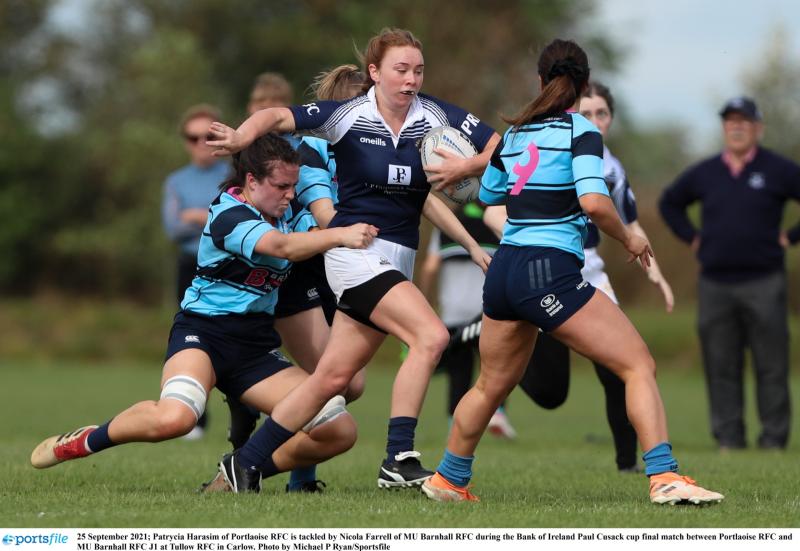 The Portlaoise Senior Women’s team travelled to Tullow RFC on Saturday afternoon to take on Barnhall Women in the final of the Paul Cusack Cup.

Portlaoise kicked off, playing into the wind, and when Lynn O’Callaghan’s kick failed to travel 10 yards forward the referee awarded a scrum to Barnhall on the halfway line in the centre of the pitch. The Barnhall pack produced a solid scrum which allowed the Barnhall number 8 to pick and break down the blindside. The number 8 made good ground before releasing the ball to the supporting player who was able to break free up the centre of the pitch and score a fine try under the posts giving Barnhall an early 7point lead.

The Portlaoise Women have shown great fighting spirit in the past and it was to be no different on this occasion. From the restart they put pressure on the Barnhall clearance and grabbed a foothold in the Barnhall half which they would not relinquish without scoring. Having regained possession, the Portlaoise pack started to squeeze the Barnhall 8 in the contact area and after several powerful forward surges, prop forward Yvonne Palmer crashed over the white line just to the left of the posts to bring Portlaoise back into the game. Fullback Jenny Keegan kicked the conversion to the leave the teams tied at 7-7, twenty minutes into the first half.

The match was finely balanced with both teams delivering strongly on their set pieces as they won their scrums and lineouts reasonably comfortably. The Barnhall backline showed real pace and power with strong running centres and real pace on the wings but Portlaoise centres Patrycia Harassim and Ellen Booth and wingers Rachel Palmer and Sarah Miller were up to the task and Barnhall were unable to breach the defensive line again in the first half.

Barnhall started to exert some forward dominance in the last 8 minutes of the first half and they generated several opportunities to score only to be denied by excellent scramble defence from Portlaoise. After a period of sustained pressure Barnhall eventually crossed the Portlaoise line again in injury time at the end of the half but the scoring pass was deemed to be forward and Barnhall were denied.

Portlaoise kicked off the second half and again gained a foothold in the Barnhall half and immediately threatened the Barnhall line. The Portlaoise pack surged up the left before releasing the ball for the backs to attack down the right wing in a flowing movement which was only stopped when full back Jenny Keegan was bundled into touch yards from the Barnhall line.

Barnhall cleared their lines and worked their way up the pitch and Portlaoise were not to threaten the Barnhall line again on the day. Eight minutes into the second half Barnhall worked their winger into space and scored a second try which was also converted to leave the score at 14 – 7 in favour of the Barnhall women. The Barnhall pack was now in the ascendancy and Portlaoise were unable to generate the quality possession needed to attack with any threat. Barnhall were able to win their own ball with some comfort and they were able to slow down or turn over possession regularly.

As the game entered the last quarter Portlaoise were still clinging on to the hopes of scoring the try needed to bring them back into the match when they turned over the ball in the Barnhall half and a sweeping move saw the Barnhall winger streak away down the right and score under the posts leaving the score 21 – 7 in favour of Barnhall after the conversion.

Portlaoise, having already lost fullback Jenny Keegan and out half Lynn O’Callaghan through injury, were dealt a further blow when scrum half Sandy Keegan was injured in the middle of the pitch five minutes from the end. After much delay Sandy was removed by stretcher and checked out in the ambulance and, when play resumed, Barnhall turned over Portlaoise possession again and scored a fourth ty to leave the final score 28 – 7 to Barnhall.

On the day the Barnhall team were too strong for the Portlaoise Women and were deserving of their victory. Ellen Booth was the Player of the match for Portlaoise on a day when they spent much of their time on the back foot. On a positive note, club captain and out half/ full back Amy O’Callaghan made her comeback from injury and played 15 minutes in the second half. Next week the league campaign starts with a game away to Longford.