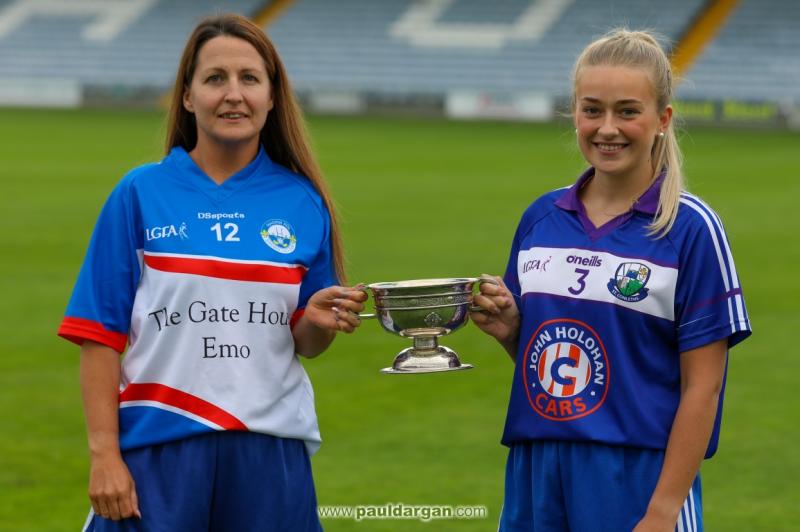 This local derby between St Conleth’s and St Paul’s in the Laois Ladies Senior Football Championship proved to be one-sided, as a strong St Conleth’s team romped to victory. The win means they finish Group A top of the table and can now prepare for a semi-final. For St Paul’s, they will now have to win a relegation decider to remain at Senior level.

St Conleth’s came out of the blocks fast, as they pressured St Paul’s goalkeeper Sinead O’Rourke’s kick-outs and mopped up any breaking balls in slippery conditions. Midfielder Allana Havill opened the scoring for St Conleth’s, as they would go on to kick eight points without reply to build an early advantage.

Sarah Walsh knocked over a free and then wing-back Aoife Kirrane tore up the field to fire over another. St Conleth’s had their first goal chance after, but Kimberly Webster dragged her shot well wide of the target.

Sinead Cullen and Walsh (free) fired over more points for St Conleth’s, as they held a commanding lead at the first water break on a score of 0-10 to 0-1.

St Paul’s made more of a game of it after the water break ended, with Ciara Crowley showing a nice turn of pace to set up Jessie O’Toole for a point. Shifra Havill replied with a point, but St Paul’s then grabbed a goal to get them back into the contest.

Emma Lawlor’s free dropped short on the line, but St Conleth’s defenders failed to secure the ball due to the wet weather, and that allowed Jessie O’Toole to gather and fire to the net.

St Conleth’s shrugged off that by scoring the last three points of the half though. Walsh (free), Alanna Havill and Sinead Cullen all found the target to give their side a 0-14 to 1-2 lead at the interval.

St Paul’s were fighting hard though and enjoyed a purple patch in the opening stages of the second half. Anna Hanlon opened the scoring for them after the restart from close range, and then Ciara Crowley dodged a few challenges to land another between the posts.

Emma Lawlor’s knocked over a free to cut the gap back to just six points, but that be as close as they would get to St Conleth’s. Aoife Kirrane, Marie Byrne, and Alanna Havill all pointed for St Conleth’s after that before they scored a goal that assured themselves of the result.

Aoife Kirrane played a nice ball to Alanna Havill, who fed her sister Shifra immediately, and she buried it to the net.

It was all St Conleth’s in the final quarter. Sinead Cullen, Alanna Havill, Walsh and Shifra Havill pointed before substitute Niamh Cullen entered the fray and fired over two nice points off her left boot. Claire Fox kicked the last score for St Conleth’s, who won by twenty in the end.