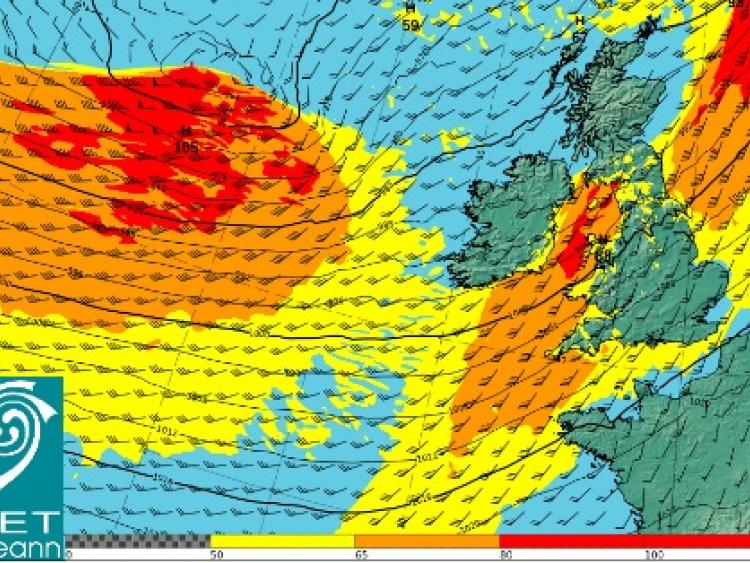 Met Éireann has upgraded one of its weather warnings to Status Orange head of the arrival of Storm Ciara this weekend.

Status Yellow warnings were issued on Thursday and an Orange alert is now in place as the forecaster expects the weather to be worse than earlier expected in Donegal, Mayo and Galway which are now the subject of orange alerts

"In advance of the arrival of Storm Ciara on Sunday, south to southwest winds on Saturday will reach mean speeds of 65-80km/h with gusts of up to 120 km/h," Met Éireann warned.

The warning is valid for Donegal and Mayo from 12 noon until 4pm on Saturday. It will be in place in Galway from 1pm to 6pm on Saturday.

Elsewhere, Met Éireann has issued Status Yellow wind and rain warnings for the rest of the country.

On Saturday, election day, southerly winds will strengthen during the day, reaching mean speeds of 50-65km/h with gusts reaching 90-110km/h in places.

On Sunday, Storm Ciara, named by the UK Met Office, will produce very strong winds over Ireland with a risk of damaging gusts.

"Over the weekend the combination of Spring Tides and high seas, as well as stormy conditions, will result in an elevated risk of coastal flooding, especially along southern, western and northwestern coasts," Met Éireann has said.

This warning is valid from 9am on Saturday until midnight on Sunday.

A Status Yellow rainfall warning will also come into force from 12 noon on Saturday until 3pm on Sunday.

On Saturday, a spell of heavy rain will spread eastwards across the country on Saturday with 20-40mm expected, highest in the west and northwest.

Another spell of heavy rain on Sunday will clear to squally wintry showers. Another 20-40mm likely.

There is a risk of localised flooding this weekend, especially over the western half of the country, according to Met Éireann.

Caution is advised on all roads.  More details below tweet.

SATURDAY 8TH FEBRUARY
Warnings for strong winds and heavy rain have been issued for Saturday. There will be bright spells and scattered showers across the country during the morning accompanied by strengthening southerly winds. During the afternoon, heavy rain will develop across Munster, Connacht and west Ulster with bright spells and showers elsewhere. Southerly winds will strengthen further with severe gusts expected at times. On Saturday evening, heavy rain will extend to remaining counties and there is a risk of thundery downpours and localised flooding. Maximum afternoon temperatures ranging 6 to 10 degrees.

NATIONAL OUTLOOK
Headline: Very windy or stormy later Saturday night and on Sunday with heavy rain and a risk of flooding as storm Ciara tracks to the north of Ireland. Becoming cold and showery early next week.

Early on Saturday night, rain will clear eastwards and strong southwest winds will ease for a time.

Overnight and through Sunday morning, as storm Ciara tracks eastwards to the north of Ireland, south to southwest winds will strengthen and become very strong and very gusty with possibly damaging gusts and with gales along coasts. A band of heavy rain will move quickly southeastwards across the country with a risk of localised flooding. Showers will follow in the afternoon. Through the late afternoon and evening, winds will become westerly. They'll continue strong and very gusty, especially in coastal areas. Highest temperatures of 10 to 12 degrees. Sunday night will be cold, windy and showery.

Monday and Tuesday will both be cold, windy and very showery days. Many of the showers will be wintry with hail, sleet and snow at times. Westerly winds will be strong and gusty with gales in western and northern coastal areas. Day time temperatures will be between 4 and 7 degrees. There'll be frost in places at night.

Wednesday will continue cold. After a mainly dry start, a band of heavy rain will spread from the west, possibly falling as sleet for a time. It will be accompanied by strong southwest winds. Later the rain will clear. Showers will follow and winds will gradually ease. Highest temperatures of 5 to 8 degrees.

Thursday will bring a mix of sunshine and showers. Highest temperature of 6 to 9 degrees with Moderate northwest breezes.

The latter part of next week will continue unsettled with rain at times. It will become milder.