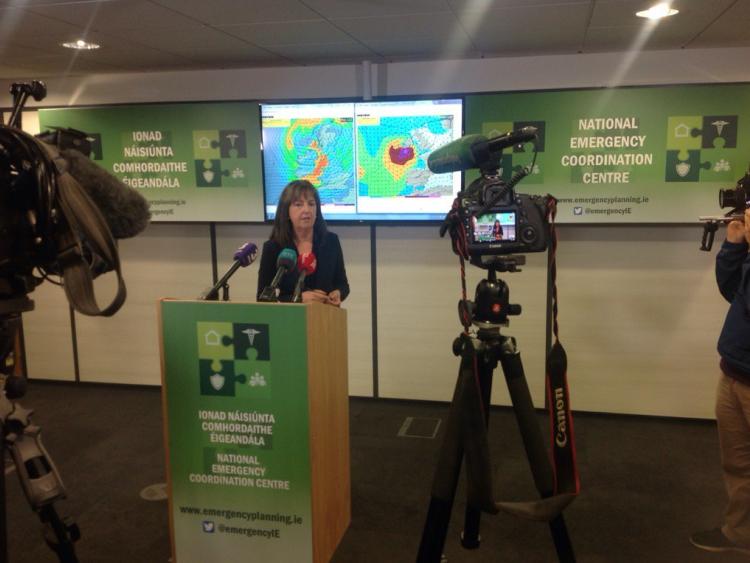 Met Éireann's chief forecaster has warned weather alerts could be raised for the midlands to Status Orange as the dangerous weather conditions will include snow, wind and rain as Storm Jorge sweeps through.

Evelyn Cusack gave an outline of what to expect weather-wise after the National Emergency Co-ordination Group met in Dublin on Friday ahead of the arrival of the Atlantic storm which is set to have it biggest impact on Saturday.

"There could be locally dangerous conditions tomorrow from a lot of different weather elements from snow, hail, flooding and high winds. My advice is that even if it is Status Yellow in your area there could be some damaging gusts so don't be fooled in to thinking, oh we are ok," she said.

Ms Cusack warned that winds of 100 kms an hour and upwards are expected around the country including the midlands. She warned that trees would be like to be blown down in the storm especially because this is the third storm of the month.

"If you see a Yellow warning for your area it doesn't mean it is safe it means it can be potentially dangerous," she said.

She also advised that a Status Orange wind alert would be extended to the middle of the country from Galway across to Kildare as the storm sweeps through during Saturday.

Apart from the wind and rain which will raise the flood risk, Ms Cusack also warned that it will be cold. She predicted a drop in temperatures which will bring snow to parts of the country. While the snow will not settle due to rising temperatures, she said there would be a wind chill effect through the day.

She said farmers with newborn lambs should take note of the cold while drivers should be aware of significant hail and snow showers.

Ms Cusack said it has been the wettest February on record at several of its weather stations.

At the same conference, Gardaí warn of very unpredictable travelling conditions over the weekend. They appealed to the public to reasses their travel plans for the weekend. Anybody that has to travel should make sure their car is fueled and their mobile phone is charged.

A spokesman for the country's local authorities said councils are prepared as they can be and have done a lot of work managing the situation.