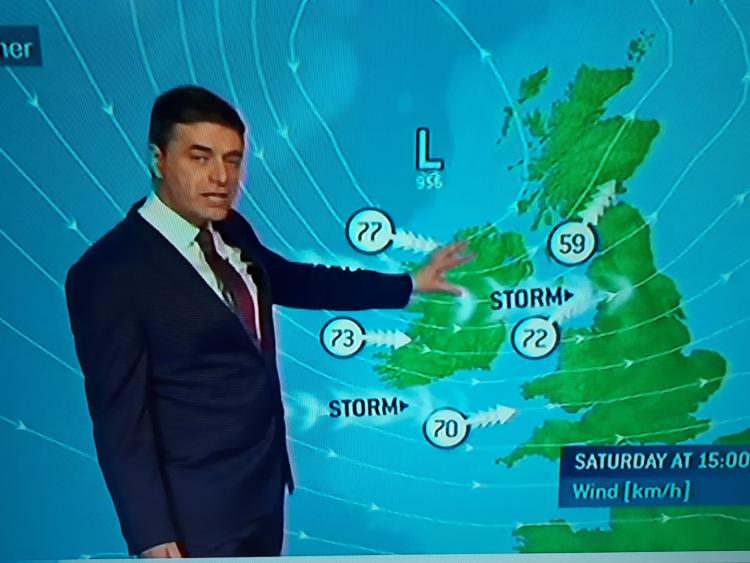 Met Éireann has urged people to stay safe and keep in touch with the warnings ahead of the arrival of Storm Jorge.

In the Met Éireann forecast on RTÉ after the news on Friday night, meteorologist Gerry Murphy said Storm Jorge is going to bring very windy or strong conditions right across Ireland as we go through Saturday with the strongest winds during the afternoon into the early evening.

He reminded people of the warnings that will be in operation. For western coastal counties, he said there is an Orange level warning in operation right the way from 6am on Saturday morning to 3am on Sunday morning.

He said that would rise to a Red level warning for counties Clare and Galway during the afternoon to 1 pm and 4 pm with gusts possible of 140 km per hour and a significant risk of cost of flooding.

For the rest of the country he said there's a yellow weather warning right the way through the day. He said that would go up to an Orange level warning nationally from 1pm until 7pm. In addition to that he said Met Éireann has a yellow level rainfall warning for across the country with the some heavy showers or spells of rain giving a risk of flooding as the water tables are very high.

Taking a closer look at the storm he said it is approaching overnight Friday into Saturday bringing its strongest winds across the country during Saturday afternoon.

He said the rain on Friday night will clear away overnight giving way to showery but it will be followed by cold conditions of between 1 and 4 degrees.

He said there would plenty of showers or longer spells of rain sweeping across the country on Saturday with just highest temperatures of 4 to 7 degrees. He said highlighted the wind

"The wind will be the more significantly feature; gales developing in the west with storm force wind off the west coast by morning and then very windy or stormy conditions right across the country true the afternoon possibly violent storm force at sea. The strongest winds in the northwest will be during the early evening and eventually the system tending to move away to the north tomorrow night," he said.

Once the storm clears he said plenty of showers would follow on Sunday.

"Stay safe and pay attention to the warnings," concluded the forecaster.

More details below picture of the storm as it approaches to the west of Ireland. 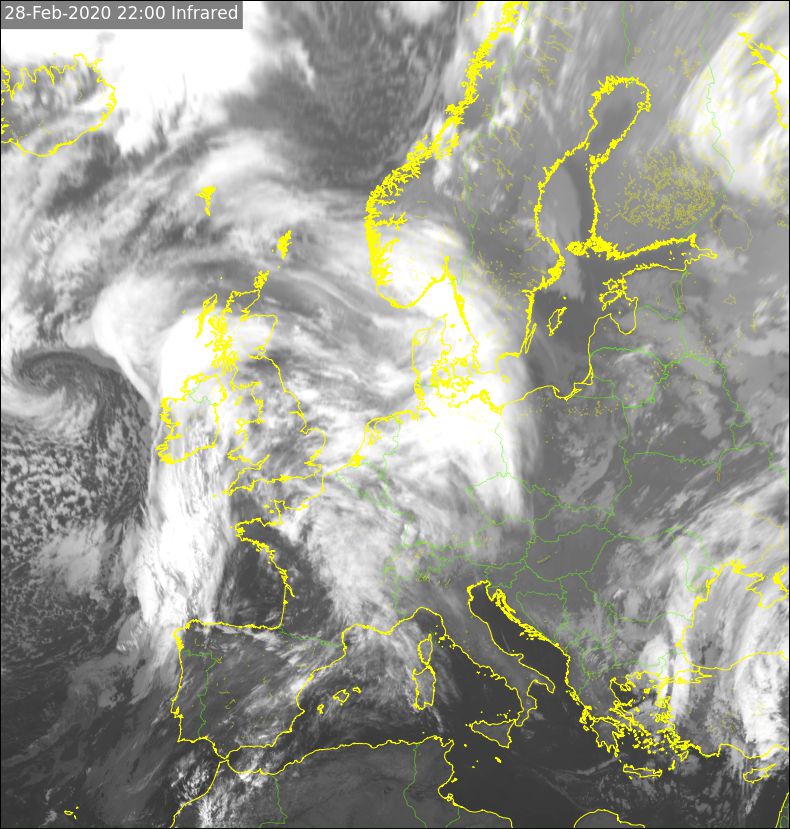 FRIDAY NIGHT
Early tonight, rain will become widespread for a time, with a risk of further flooding. Clearer conditions, with scattered showers of rain and hail, will follow overnight, most of them in the western half of the country. I t will gradually turn much colder, with some of the showers turning wintry later. Minimum temperatures 0 to 3 Celsius, in mostly moderate southwest winds, strong in Atlantic coastal areas.

TOMORROW - SATURDAY 29TH FEBRUARY
Storm Jorge (pronounced Hor-hay) will impact Ireland tomorrow, Saturday. A band of heavy and possibly thundery rain and hail will extend from the west during the morning, with sleet and a risk of snow in places. Brighter conditions, with scattered showers of mostly rain and hail will follow by afternoon, but some of the showers will be heavy and prolonged, with a continuing risk of wintry showers and thunder. Extremely windy or stormy, with very strong southerly winds during the morning, veering westerly and strengthening further, with severe and damaging gusts and a risk of further flooding. Very cold, with maximum afternoon temperatures of 5 to 8 Celsius.

Saturday night: Heavy rain will persist in Ulster on Saturday night, with some falls of sleet or snow possible. Elsewhere there will be scattered wintry showers, becoming mainly confined to western areas by Sunday morning. Remaining very windy early on Saturday night, with strong and gusty west to southwest winds and gales in parts of the west and northwest, but winds will ease moderate to fresh later. It will be a cold and frosty night, with lowest temperatures of 1 to 3 degrees.

Sunday: There will be bright spells and further wintry showers on Sunday, with the best of the dry spells in the east and southeast. Some showers may be heavy with a risk of hail and thunder. It will be quite blustery too, with fresh westerly breezes, strong along western coasts. It will be a cold day, with highest afternoon temperatures of just 4 to 7 degrees.

Sunday night: Sunday night will be a cold and frosty night with clear spells and wintry showers mainly in the west and north. West to southwest winds will be mostly moderate, but fresher along western coasts. Lowest temperatures of -1 to +2 degrees.

Monday: Wintry showers will be mainly confined to western areas on Monday morning, but will become more widespread during the afternoon. It will be a cold day with highest afternoon temperatures of 5 to 7 degrees, in moderate westerly breezes, fresh along western coasts.

Monday night: Scattered wintry showers in western and northern areas at first on Monday night, but becoming more isolated as the night goes on. It will be cold and frosty with lowest temperatures of -2 to +1 degrees, in mostly moderate westerly breezes.

Tuesday: Tuesday morning will start off mostly dry with sunny spells and scattered showers in the west. Cloud and rain is expected to move into the southwest later on Tuesday morning and spread northeast across the country. It will be a cold day with highest temperatures of 3 to 6 degrees, so some falls of sleet or snow will be possible particularly on high ground.