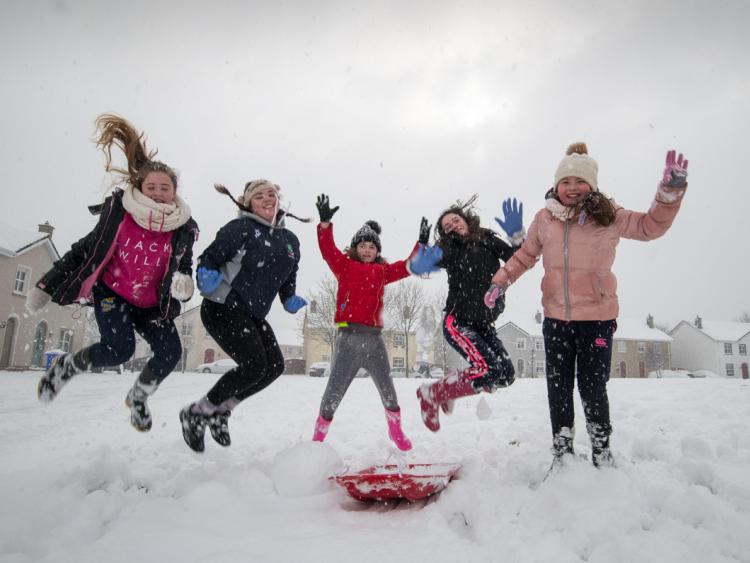 Playing in the Beast from the East snow in 2018 in Mountmellick. Picture:Denis Byrne

Met Éireann has issued a snow warning for most counties in Ireland as Atlantic and European weather systems clash over the island in a less severe repeat of the Beast from the East climactic scenario that hit in 2018.

Met Éireann warns that these counties will be hit by wintry falls with some accumulations possible.

The warning is valid from 6am to 6pm Sunday, January 31.

In its forecast Met Éireann says there will be widespread wintry outbreaks of rain, sleet and snow on Sunday morning. It says the snow will turn to rain during the day except in the north. Easterly wind and low temperatures will make for a very cold day.

The alert was issued at 1pm on Saturday but the forecaster had already issued a weather advisory for wintry and unsettled conditions through the weekend.

Rain and gale warnings were also issued over the weekend by the forecaster.

Over the coming days, Met Éirean says Ireland will lie between colder air to the north and an Atlantic pattern to the south that will feed in several lows bringing rain sleet and snow at times as well as blustery east winds.

Forecasters have also said that Atlantic weather is clashing with a Northern European weather system over Ireland and Britain similar to 2018 when the Beast from the East and Storm Emma struck.

Wintry falls with some accumulations possible.

Over the coming days Ireland will lie between colder air to the N & an active zonal Atlantic pattern to the S that will feed in several lows bringing rain sleet & snow at times as well as blustery E winds.

Saturday: Cold and windy this afternoon with outbreaks of rain, possibly turning wintry over higher ground in the east. However, northern counties will stay fully dry with more scattered falls of rain across Munster. Feeling raw with an added wind chill factor; highest temperatures of 3 to 8 degrees Celsius, in fresh to strong and gusty easterly winds.

Largely dry this evening and for much of tonight with clear spells. However, some frost and ice will set in across more sheltered areas. Later tonight, rain will move into the west and southwest, proceeded by falls of sleet and snow, especially over Connacht. Rather breezy with moderate to fresh easterly winds. Cold with lowest temperatures of -1 to +3 degrees Celsius.

Sunday: Wintry outbreaks of rain, sleet and snow will become widespread on Sunday morning. Some temporary accumulations are possible across the northern half of the country, before precipitation mainly reverts back to rainfall later in the day. However, wintry falls will persist across the far northwest into the evening hours. A very cold day generally with highest temperatures of 1 to 5 degrees Celsius, in fresh southeast winds. It will though be little less cold across the southwest with lighter winds here too.

The rain and sleet will continue for much of the night but becoming patchier with drier conditions developing in places. Lowest temperatures of 0 to 4 degrees generally, but around 6 or 7 degrees in the southwest. Easterly winds will ease during the night.

Monday: Another cold day with rain and sleet becoming mostly confined to the western half of the country by the afternoon. Drier elsewhere with some sunny spells developing. Staying cold throughout the day in the northern half of the country with highest temperatures of just 0 to 4 degrees with further falls of sleet or snow over Ulster. Warmer elsewhere with outbreaks of rain and highest temperatures of 5 to 9 degrees, continuing mildest in the southwest in moderate to fresh east to southeast breezes.

A band of heavy and persistent rain will move into the southwest early in the night, spread northeastwards across the country, with a clearance to scattered showers following. Lowest temperatures of 0 to 5 degrees, but milder in Munster with lows of 5 to 7 degrees. Moderate east to southeast winds will increase fresh and gusty in Ulster with some further falls of sleet or snow there.

Tuesday: Rain will continue to clear through Ulster in the morning with widespread showers elsewhere, merging to longer spells of rain during the day and night along with a risk of hail. A milder day generally with highest temperatures of 7 to 10 degrees in light to moderate southeasterly winds but staying quite cold over Ulster with highest temperatures of just 3 to 6 degrees with fresh and gusty easterly winds. Overnight lowest temperatures of 2 to 6 degrees with clear spells. Mist patches will develop in light to moderate southerly breezes but fresher on southern coasts.

Further outlook: Remaining unsettled with further showers or spells of rain. Highest temperatures of 5 to 10 degrees.

A nationwide forecast and outlook covering the next week can be found here. https://t.co/9gKN6SVok4 pic.twitter.com/PTlMKZvJrw