Any chance of the weather picking up again? Met Éireann has the latest forecast 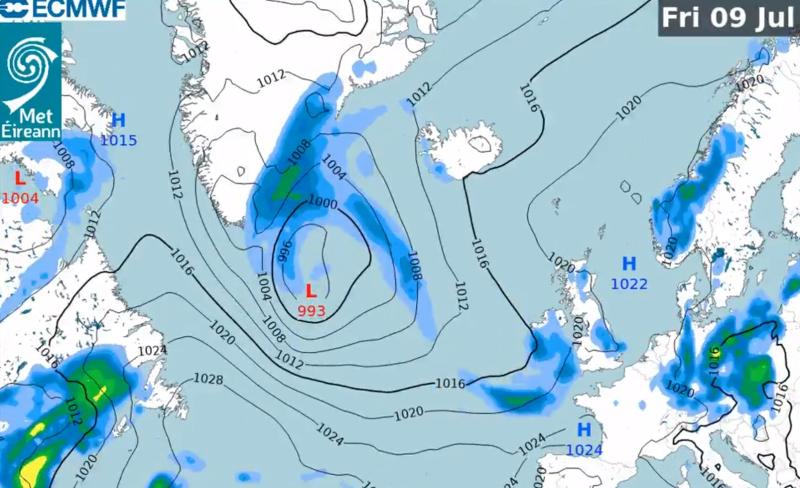 Met Éireann isn't forecasting a return to the good weather we had in June just yet with settled weather not yet on the horizon and the weekend promising a mixture of sunshine and showers.

The forecasters latest prediction says will become drier from Wednesday after a spell of persistent rain on Tuesday with some high pressure buiding. However, it is not part of a trend that will lead to the weather improving by the weekend.

While sunny spells and higher temperatures are on the cards for Saturday and Sunday, heavy showers and cloudy weather will dampen expectations.

Met Éireann's farming forecasters say sunshine amounts will be below average in most areas these next few days with a moist Atlantic flow dominating. The weather from the west will also mean normal rainfall is expected for the main.

The farming section says much of the midlands, north and west were wetter than normal over the past seven days, with rainfall totals between 140% and 295% of normal. MORE BELOW TWEET.

Forecast for the week ahead:

But by the #weekend it looks like more showers are in store️ pic.twitter.com/FlZdWQNO8b

NATIONAL FORECAST from Met Éireann issued at 2.45pm on July 6.

TUESDAY: Continuing mostly cloudy for afternoon with scattered showers but some bright spells will develop. Some showers will be heavy, especially over Ulster and Leinster, with the risk of isolated thunderstorms in the east. More persistent rain will extend from the northwest this evening. Highest temperatures of 15 to 19 degrees in moderate to occasionally fresh northwesterly winds.

The night will be rather cloudy and misty, with patchy rain and drizzle, most persistent early in the night in the south and west. Some clear spells will develop also. Lowest temperatures of 9 to 12 degrees in light to moderate west to northwest breezes.

WEDNESDAY
Wednesday will start mostly cloudy with outbreaks of rain or drizzle mixed with occasional brighter spells. While it will stay mostly cloudy in the west during the afternoon, the best of the brighter spells will develop in the east. It will become generally drier over all, but there will be a chance of a few shower, especially in the southeast by evening. Highest temperatures will range between 16 and 21 degrees, coolest in Atlantic coastal counties, in light to moderate northwest winds, fresh at times in the southwest.

Clear spells in the east and south early on Wednesday night, but cloud will increase overnight bringing isolated showers. Lowest temperatures of 11 to 13 degrees with light west to northwest winds.

THURSDAY: Thursday will be mostly cloudy with scattered showers, mainly across the eastern half of the country and becoming isolated by evening. Some sunny spells are likely in the west and south later. Highest temperatures of 16 to 18 degrees with light west to southwest or variable breezes.

Thursday night will start mostly dry, with just the odd light shower in the northeast, but rain will develop in the west and southwest overnight. Lowest temperatures of 11 to 14 degrees with light, variable winds and some patches of mist.

FRIDAY: Outbreaks of rain and drizzle in the west and southwest will move northeastwards and will be followed by sunny spells and scattered showers, most frequent in the southwest. Highest temperatures will range 17 to 20 degrees with light southerly or variable breezes.

A chance of showers in the south and southeast on Friday night, but otherwise becoming dry with clear spells. Lowest temperatures of 11 to 14 degrees with light southeasterly breezes.

THE WEEKEND: It looks like Saturday and Sunday will bring sunny spells and scattered showers, some heavy in the afternoons. Temperatures are expected to reach 19 to 22 degrees on Saturday, but less warm on Sunday due to more cloud.