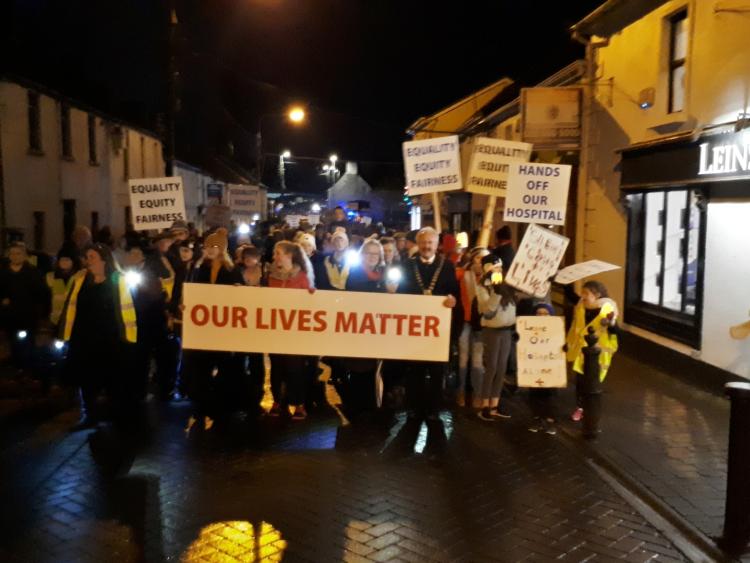 Light for Lives hospital protest in Portlaoise in November 2017.

The Minister for Health has claimed he is still trying to work out 'a mechanism' to gather views from the public, doctors, nurses and others on the future of Portlaoise hospital.

Minister Simon Harris updated Laois TD Brian Stanley on the issue in the Dáil this week. He asked the Minister when the consultation process on the future of the Midland Regional Hospital Portlaoise involving local clinicians and the community will begin and the expected timeframe for completion.

A HSE Dublin Midlands Hospital Group plan is with the Minister. A final version of the plan proposes extensive downgrade of the Laois hospital with services relocated elsewhere.

Last December, Minister Harris promised consultation on this instead of agreeing to implementation.

"I am trying to work out a mechanism whereby the people of the midlands, the people of Portlaoise, the clinicians, the stakeholders and the public can have their say and their views heard and can tease out and stress-test all the important issues," he said.

Dep Stanley also raised recent comments by Taoiseach Leo Varakar at a private Fine Gael meeting in Mountmellick. The TD told Minister Harris that Mr Varadkar said that he did not envisage any closure, downgrade or significant reduction in services at the hospital because it just would not work as Tullamore and Tallaght hospitals would not be in a position to deal with the extra patients from Portlaoise hospital.