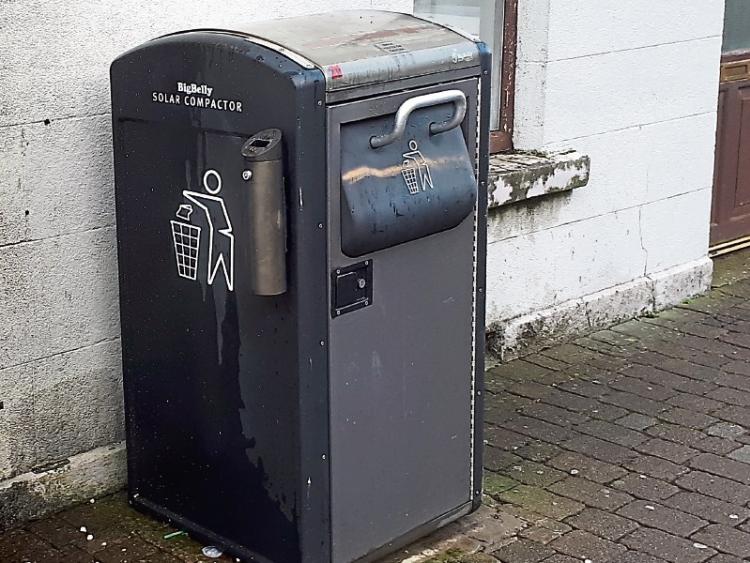 One of several solar compator bins in Portlaoise

Portarlington’s new street cleaning vehicle does not go into all estates in the town while Graiguecullen does not have any public litter bins, Laois County Council has confirmed.

Philip McVeigh, Senior Executive Engineer, responded to clarification sought by Cllr Aidan Mullins that it is only deployed in estates that have been taken in charge by the council.

Cllr Mullins said the community, especially the Tidy Towns, is pleased with the deployment of the machine exclusively to the town.

Mr McVeigh told the the Sinn Féin councillor and other members of the Portarlington Graiguecullen Municipal District at their meeting in December that the streets are being cleaned every day in the Laois side of the border town.

He added that bins are emptied in Port, Stradbally, Emo and Ballybrittas on a daily basis.

Meanwhile, at the same meeting the councillors were given a round up on litter picking and the provision of litter bins in Graiguecullen

There are no public litter bins in Graiguecullen but litter is picked in the Laois Carlow border town every day, Laois County Council has revealed.

Responding to a query from Cllr Aisling Moran, Philip McVeigh, Senior Executive Engineer revealed that ‘there are none’ in the Laois Carlow border town.

“We probably need them then,” responded Cllr Moran at the Municipal District Meeting last month.

Cllr Moran raised the issue after it was stated litter is picked every day in the town.

Mr McVeigh also told the meeting that bins are emptied each day in Port, Stradbally, Emo and Ballybrittas.