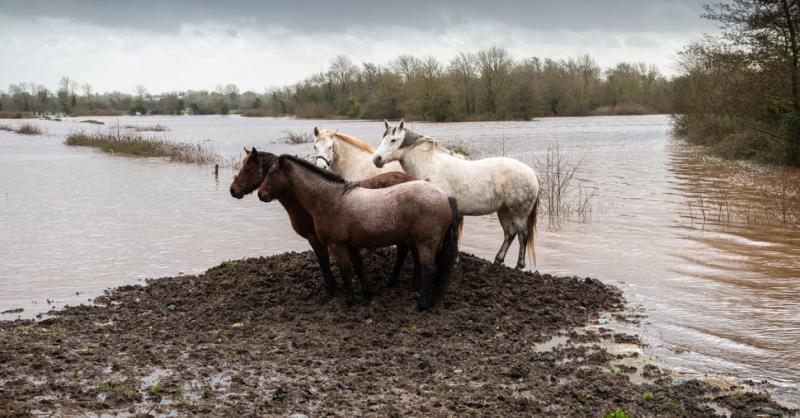 Nearly half a million euro set aside to prevent flooding caused by clogged Laois rivers cant' be sent because county's council is 'hamstrung' by national and European environmental red tape, according to Laois County Councillors.

Fianna Fáil, Fine Gael and Independent councillors for the south and west of Laois were unanimous in the view and that river clearance is needed and demanded by local people cannot not happen because of the need to get the environmental green light.

The frustrations emerged at a recent meeting of councillors that represent the Borris-in-Ossory Mountmellick Municipal District area. The Rivers Barrow and Nore flow through the area as do many of their tributaries. The district has been the location of substantial flooding in recent years notably Mountmellick in 2017.

The councillors believe river clearance is one of the ways that can help reduce the risk of damage to farms and towns. The issue emerged at their Municipal District meeting in June.

Cllr James Kelly, Independent, tabled a motion calling on the Council to carry out the work identified on the Upper Nore, at the Basin Wall, Derryduff, Coolrain and also carry out clearance and maintenance works on the river. He said the work should be done by drawing done funds from the maintenance budget for land drainage.

Mr. Edmond Kenny, District Engineer replied that preliminary designs for the repair of the Basin embankment wall are complete. He said Environmental Consultants acting for Laois County Council have commenced an environmental Natura Impact Statement. Mr Kenny said he would update Cllr Kelly on the progress of these works.

Cllr Kelly was frustrated by the pace of advance the work he said needed to be carried out.

"It is an ongoing issue for the last four or five years," he said.

He estimated that the council should have up to €125,000 available. He said €100,000 was accumulated unspent cash set aside over the past four years. He said people want action.

"I keep constantly getting phone calls from the people...patience is running thin," he said.

He said the environmental impact statements take time but said the River basin walls need work before trees, bushes or branches that are blocking the river can be cleared. He hoped a bad flooding event does not happen in the meatime..

"God forbid it happens like what we had before around Mountmellick and Portarlington," he aid.

"We just need this work to commence soon as possible. The money is there. We've got to clean our rivers," he said.

Mr Kenny told Cllr Kelly that the commencement on the work depends on the completion of the natura impact statements.

Cllr Kelly said this shows the council is stuck

"I know your caught in a Catch 22 You're. You have the men ready to do the work. And contractors will be on board straightaway. We're getting fully tied up in all these impact statements. It's a joke... And people are getting so frustrated...They are sick and tired of it," he said.

"The issue that I see time and time again, is that we are hamstrung by ecological regulations and red tape. It's increased a lot in the last couple of years since the drainage boards were abolished," he said.

He hoped the council would also be able to clarify what could be done but he insisted that plenty of money has built up that could not be spent.

"There was an allocation set aside of €55,000 for specific section of the River Nore, between the basin under the area, and that hasn't been spent. So I will be anxiously up on the spent. We have €405,000 set aside for for a three river drainage programme," he said.

He said residents impacted by the Nore were anxious about the long wait for work and he also referenced the flooding in Mountmellick.

"The problem I see here is, money is allocated but the council can't carry out the works until all the permissions are in place and the ecological regulations are met. I think they are far too onerous. It is at national level at the European level," said Cllr Bergin.

"When land gets flooded it's damages it a lot. Certainly the production level as after the flood is very, very low," he said.

He was also frustrated with the rules.

"We all know there is red tape and it's very hard to break through but something is going to be done because the Nore and River Gulley are in a desperate state. I would like to see money spent immediately," he said.

Cllr Seamus McDonald, Fianna Fáil, was also frustrated with a promise to clear parts of the River Barrow from the Bay bridge to Tinnahinch bridge.

"The works have been tied up there for years," he said.

Director of Services, Donal Brennan, addressed the issue which he described as 'perennial'. However, he said the council had adopted a new approach in 2019 to move away addressing river problems on annually to taking comprehensive action which involved tackling silt banks. He cautioned that doing this in involves more planning and clearance on an ecolological front. He believe that the new council approach would pay off

"The approach we're taking now will will bear fruit into the long term," he said.

The meeting was told that work is being carried out this year at a flood pinch point which puts Mountmellick at risk.

Work in pipeline for river flooding pinch points near Mountmellick