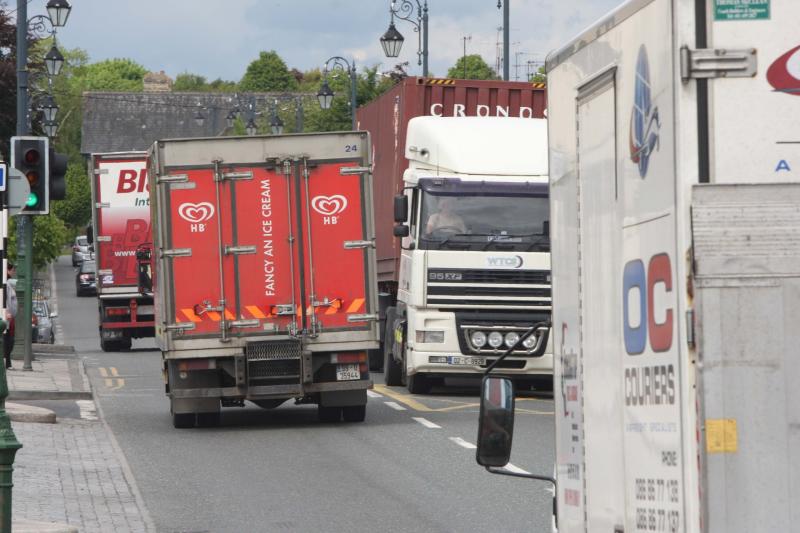 Some 30,000 heavy trucks per year may be driving through three Laois towns just to avoid paying the M7 motorway toll.

A traffic survey commissioned by Laois County Council found that in one 24 hour weekday period, a whopping 580 heavy goods vehicles drove on the N77 road through  Abbeyleix, Durrow and Cullohill.

While 492 of them are said to have had valid reasons for going through the Laois towns such as deliveries or local business, 88 HGVs had no reason to leave the motorway, leaving the council to presume they were avoiding the €4.90 toll.

"The potential number of toll avoidance is 88, or 15.2%," Laois council engineer Adrian Barrett reported this week to the Portlaoise Municipal District meeting.

"It will be done" - says Taoiseach

He said that before the motorway was built, there were 2,072 trucks going through the towns per day.

"As things stand there is a 72% reduction in the number of HGVs travelling through Abbeyleix and Durrow," the engineer said.

HGVs which pollute small towns to avoid paying tolls should reconsider their practices, according to Minister Pippa Hackett in response to the Origin-Destination survey.

“Children, old people and the vulnerable deserve to walk the streets of their towns without having to endure the noise and traffic of these large vehicles.

“Most hauliers are doing the decent thing and using the correct route. 2,695 HGV drivers use the M7 Toll Plaza daily. I now call on all hauliers to pay their tolls and keep their vehicles out of small towns.

“This survey highlights what’s happening in Abbeyleix, Durrow, and Cullolhill but it’s probably happening in other parts of the country as well. I commend Laois County Council on conducting this survey,” she said.

The survey used number place recognition to identify vehicles that may have left the M7 and rejoined it avoiding the toll.

The council engineer also gave an update of an air quality study that is still underway.

It has so far found that the Nitrogen Dioxide pollution from the trucks does not exceed EU safety levels. The six month study of the air in Abbeyleix, Durrow, Cullohill and Portlaoise will conclude this week and the Environmental Protection Agency will issue a report on it in March.

The report to the Portlaoise MD meeting followed concerns over trucks in Abbeyleix raised by Cllr John Joe Fennelly.

"The figures are fine but if we can get it down further the better. There are a number of businesses, quarries, transport companies and Glanbia and I can understand if it is an appropriate route they have to take.

"Abbeyleix Tidy Towns have been involved with this as well. It's good to see that the air quality does not exceed EU levels and I look forward to the final report," he said.