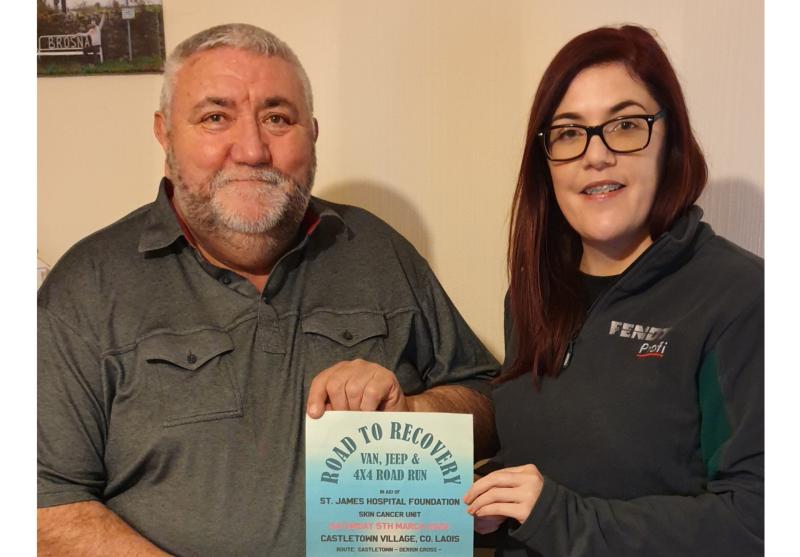 Father and daughter Toney and Niamh Ryan from Castletown who are holding a Jeep run in aid of St James Hospital who successfully treated Toney for skin cancer.

Road runs are usually all about the spectacle of big trucks and tractors, but a Laois father and daughter are giving owners of 4x4s and vans a spin in the limelight, for a very good cause.

Niamh Ryan from Pike of Rushall near Castletown, is organising the Road to Recovery road run to take place on Saturday, March 5.

She is doing it as a huge thank you to St James Hospital in Dublin, who may well have saved her father Toney's life.

Last year Toney Ryan was attending an appointment to have his hearing aid checked, and he was advised to have a sore on his ear checked out by his doctor.

Toney thought that he had accidently hurt the top of his ear and the scab just hadn't healed because his face mask was irritating it.

He went to his doctor who referred him to St James Hospital who confirmed it was skin cancer. They removed a piece of his ear and repaired it with a skin graft from his collarbone.

Now Toney is cancer free and his grateful daughter wants to raise money for the specialist skin cancer unit.

"They were amazing, they were so good. They put him at his ease. We didn't know what way it would go but they reassured him. He is very lucky that it was caught in time. It looks now like nothing ever happened.

"He is on a good path now, everything is all clear and we want to celebrate, and to highlight to others to go to their doctor. It looked like something so simple, a scab that wasn't healing.

"People think that because you live in Ireland you don't need suncream. Dad was always outdoorsy. It has made us more conscious of covering up with hats and suncream," she said.

Niamh works with Meany Plant & Civil and is a member of Camross Macra.

She has put her graphic design degree to good use to design a permanent window sticker for participants in the Road to Recovery.

"We want jeeps and vans but everyone is welcome. It is €20 per vehicle. It will start at 5pm from Castletown and run through Borris-in-Ossory, Ballacolla, Abbeyleix and hopefully into Portlaoise if possible," she said.

In Pictures: Laois Queen of the Plough Anna May McHugh is special guest in Portlaoise