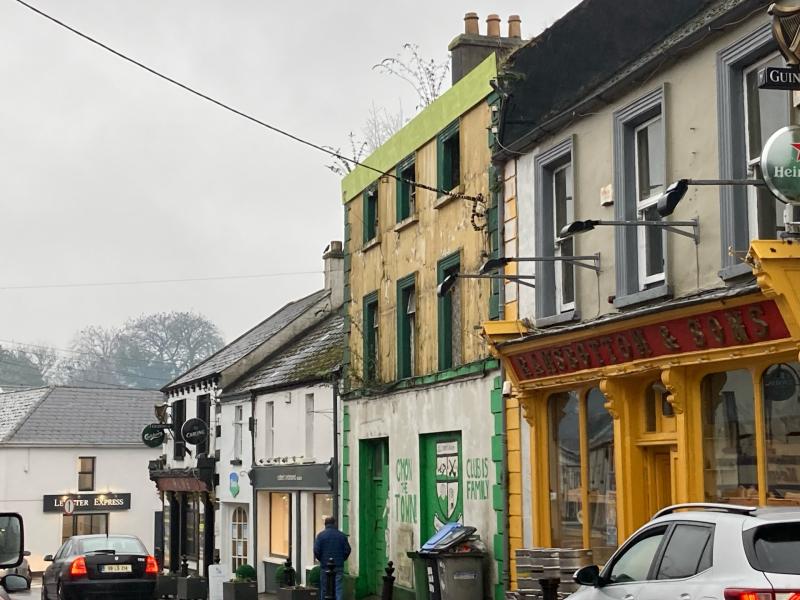 The worsening condition of a derelict hotel in Portlaoise that is owned by Laois County Council is "embarrassing" a councillor.

The old County Hotel on the Main Street was bought by the council in January 2019 after a protracted effort to get its owner to sell.

Their double aim was to tackle urban dereliction, and provide social housing.

However three years on, work is still only at planning stage, with 10 small apartments planned by the Clúid housing association.

Just six homes now available for rent in Laois, none in Portlaoise

Cllr Willie Aird said there are bushes growing out of it now, speaking after the council were praised for flipping on the Millbrook House mansion to what turned out to be the tech billionaires John and Patrick Collison.

"It is great you got the people to come forward with the money do it up. Well done to Abbeyleix. Maybe now you can put as much effort into the county hotel in Portlaoise.

"I was so disgusted when I walked down the town the other night to see the bushes growing out through the windows. For god's sake. Laois County Council own the building. Will you do something and don't have it embarrassing us?," he said.

"There's work being on that in terms of the survey. We'd hope to advance that this year. It's not a protected structure, it's just a derelict structure. We have a legal responsibility on protected structures, such as Millbrook House," he said.

In the meantime, the building will get a tidy up.

The building is vacant for several decades. It is missing part of its roof and was the victim of several fires. Scaffolding to stop debris falling on pedestrians was replaced last year with a less obtrusive barrier by the council.

A site investigation took place this January. A Stage 2 application will be made to get department approval on the design and value for money. Next Part 8 planning documents will be drawn up to present for approval to Laois councillors.