Bad timing - repair begins of 'ugliest clock ever' in Portlaoise 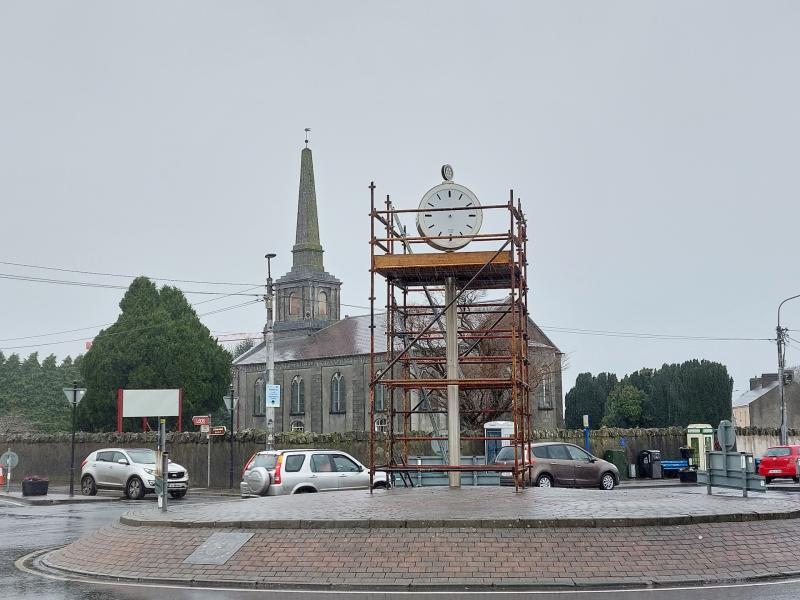 The clock at the centre of the roundabout in Market Square, Portlaoise. Photo: Leinster Express

The timing is not good with Storms Dudley and Eunice as repairs start on what is called "the ugliest clock ever" in Portlaoise.

In fact the timing is broken, with replacement parts needed for the clock on Market Square roundabout in the Laois capital town.

The clock was first installed and funded by Portlaoise Rotary Club, but Laois County Council is paying for its repair, as part of an upgrade of the roundabout which will see bricks replaced by planting.

Cllr Tomasina Connell asked for a timeline for repairs, on the day scaffolding went up on the clock, Wednesday February 16, tabling a motion to the Portlaoise Municipal District meeting.

It hasn't worked in months she said.

"I know its a specialist repair, but a lot of people are saying it to me, they are bamboozled by the wrong time stuck at 20 past 4. Can we do something as soon as possible?" she said.

"Even a broken clock is right twice a day," said Cllr Noel Tuohy.

"It's probably the closest thing we have to a landamark. The taking down of the blue bridge was a disgrace, it was an actual landmark. You can't even meet under this clock because it's on a roundabout. It says something about us to leave it there broken," he said.

"It's probably the ugliest clock ever. Would it be worth buying a new one instead? People have said to me that a Clery's style clock would be lovely. If you're looking for so many spare parts would it not be cheaper to go new?" she asked Portlaoise area engineer Wes Wilkinson.

"In a word, no. Work has already started," he said, outlining what work will be done.

"It requires rare specialist elements to be upgraded in its lighting. Another part is to be taken away and refurbished," he said.

Cllr Catherine Fitzgerald said that the broken clock has been raised on the agenda of the Portlaoise Town Team for several months.

"I actually think it is a landmark in the town, I hope it will be repaired soon," she said.

Cllr Willie Aird wants the Volkswagon beetle to go back up to promote Portlaoise's link to Electric Picnic, and he wants a plough as well, with the National Ploughing Championships returning in full to Laois this year.