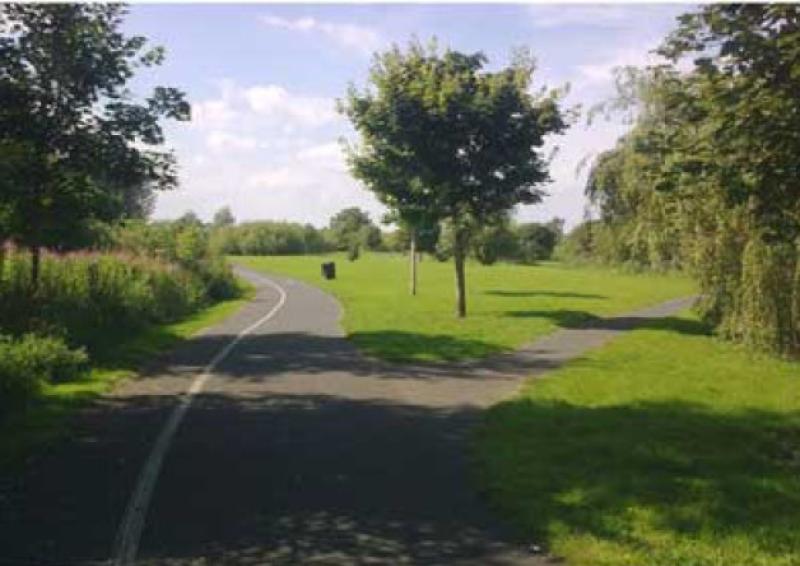 Some €650,000 of public money is being spent to create a shortcut river 'blueway' through Portlaoise town but an unlit section is not safe say two local councillors.

A female Portlaoise councillor has said she is "anxious" while walking her dog in Portlaoise Linear Park, while her colleague said he would not encourage his wife or sisters to walk there.

One part of Portlaoise Linear Park beside the Triogue River needs public lights.

She also tabled a motion asking Laois County Council to do a review of its public spaces across the Portlaoise Muncipal District, "with a view to making them safer for families, children and those accessing these areas, in particular the People's Park and the Linear Park".

"Personally I felt really anxious there at 4.30pm with my dog in the Linear Park," she said.

He was not happy to hear that An Bord Pleanála must first give approval that lights will not adversely affect river wildlife.

"When the lights go on at O'Moore Park what happens the flora and fauna there? Birds are flying around like it's the middle of the day. I was asked to walk this route by concerned residents. They asked me would I recommend walking there and I said no. I wouldn't encourage my wife or sisters to go.

"It will be grand when it's completed, it's just the one are in it with a blip," he said.

"Would you allow your loved ones to walk there on their own? You have to go under a bridge. We spent a lot of money on this park but we need more. I'm begging you to do it," Cllr Aird said.

Long wait ahead for a Portlaoise bus town service

"I sense councillors' frustration but these are laws set down by the state. I don't doubt the importance. This section of the Triogue Blueway is nearly complete but we are waiting for the lights. The council is committeed to completing the Triogue way from Green Mill Lane to the People's Park. We are widening paths to accommodate cyclists together with installing public lighting.

"Given this section is directly adjacent to the river, it brings in environmental designations and we are required to prepare an application to An Bord Pleanála to comply with our own legal requirements. The application will take two months then An Bord Pleanála will adjudicate. Funding is not the issue, it is the consent," he said.

In response to Cllr Connell's motion, the council say that great consideration on safety as they enhance the public realm. They said that security  is boosted by making places more accessible with more "oversight".

Engineer Paul O'Loughlin said that increased public lighting is planned to continue in the next 18 to 24 months in both of the town's parks.