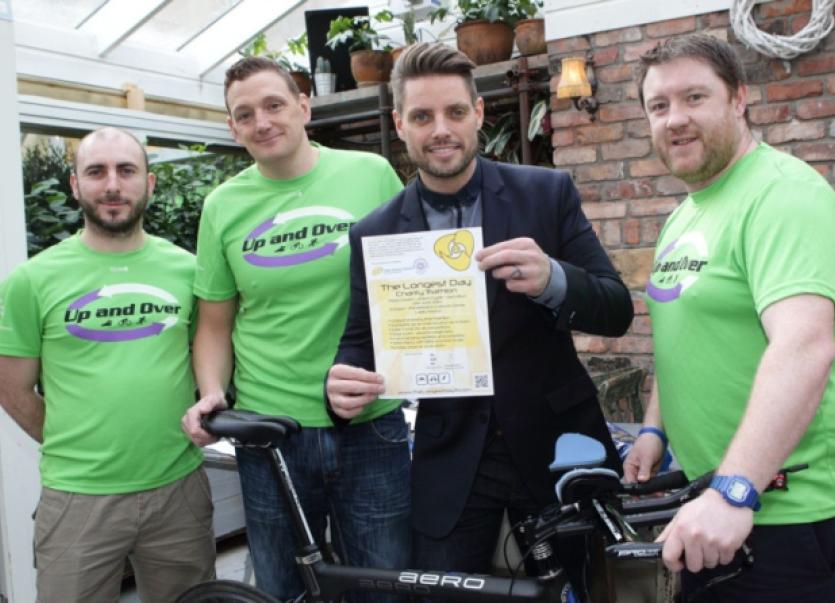 Following the success of their epic ‘Up and Over’ fundraiser, triathlon junkies Wesley Reilly and Mark Neilon from Portarlington and Dubliner Richie Hart have set a new challenge.

Following the success of their epic ‘Up and Over’ fundraiser, triathlon junkies Wesley Reilly and Mark Neilon from Portarlington and Dubliner Richie Hart have set a new challenge.

On June 21, ‘The Longest Day’, they will attempt to complete twelve sprint triathlons non-stop in 24 hours, at Port Leisure Centre.

Each involves a 750m swim, 20km bike ride and 5km run, with no time to rest, grabbing some food after each swim.

“It is physically possible to do it. I am sure it is going to be a nightmare, but the fact that we are keeping local will bring support, and make it more interesting for us,” says Wes, who will soon be training six days a week in preparation.

They are including one public triathlon at 7pm, with 70 places, already filling up.

“It is aimed at beginners, with a barbecue after in The Anvil. It would be great to see local businesses put forward a representative to add to the fun. The entry is €60, including a t-shirt. We upped the fee as it is for charity,” Wes says.

The second event is a public marathon around Portarlington during the French festival, called the ‘Marathon des Escargots’, on July 12.

There is also a half marathon and 10k, all chip timed.

“We are hoping that will be a big money spinner, and it will become an annual event,” he said.

Last year they raised €7,000 for the Irish Cancer Society and Irish Autism Action. This year they will fundraise for the IAA again, and for the LARCC Cancer Support centre in Westmeath.

“When we are doing big events, we feel we should make it worthwhile and help charities. We have a few lads in the Trilogy triathlon club who have kids with autism. We chose LARCC because Mark’s mother is being treated for cancer and she has got help from them,” Wes explained, adding that they are seeking more sponsors.

See www.marathondesescargots.com, find ‘up and over ultra triathlon’ on facebook. To enter, see Run Ireland or www.active.com.