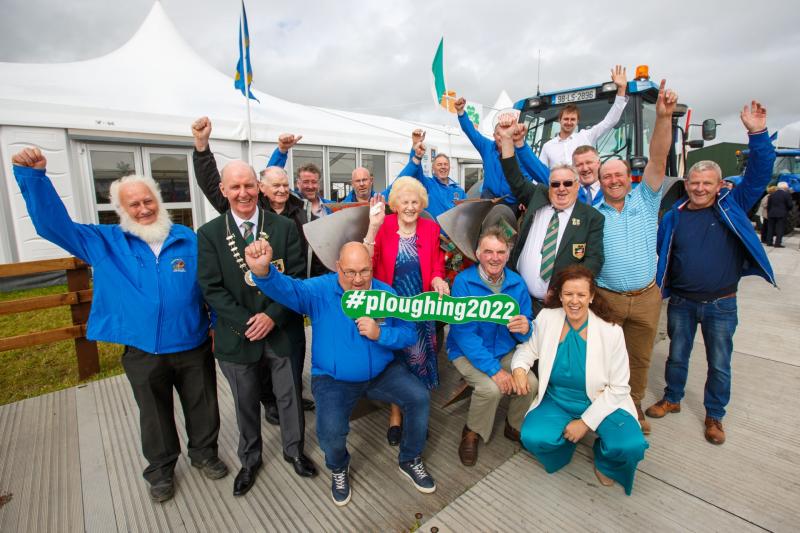 Anna May McHuge with the members of Laois Ploughing with NPA president James Sutton on site at Ratheniska, Co. Laois for the launch of the National Ploughing Championships.

Who better to talk to about it but the Laois Queen of the plough Anna May McHugh about the National Ploughing Championship which is returning for the first time since 2019 when it is staged in her home county at Ratheniska from September 20 to 22.

Anna May lives close to the village of Ballylinan which is just a  few kms away from the ploughing site along the N80. She has lived in this area all her life. She was married to John McHugh (RIP), has one son, one daughter and four grandchildren.

Growing up on a family farm with her five brothers and two sisters, Anna May had a very happy childhood. She was educated in St Patrick’s National School, Ballylinan, St Brigid’s Secondary School in Athy, Co Kildare where she also completed a commercial course.

Her journey through the ploughing started in 1952 when she took a job as secretary to the founder of the National Ploughing Association (NPA), she was appointed Secretary in 1956 when the NPA became a limited company and elected Managing Director in 1973.

Anna May has been at the helm of the Ploughing Championships as it has evolved from a small ploughing match and agricultural trade exhibition to what is now widely recognised as the biggest agricultural event in Europe with 283,000 attendees last year, 1,700 trade exhibitors on 50 acres and 350 ploughing competitors. MORE BELOW PICTURE. 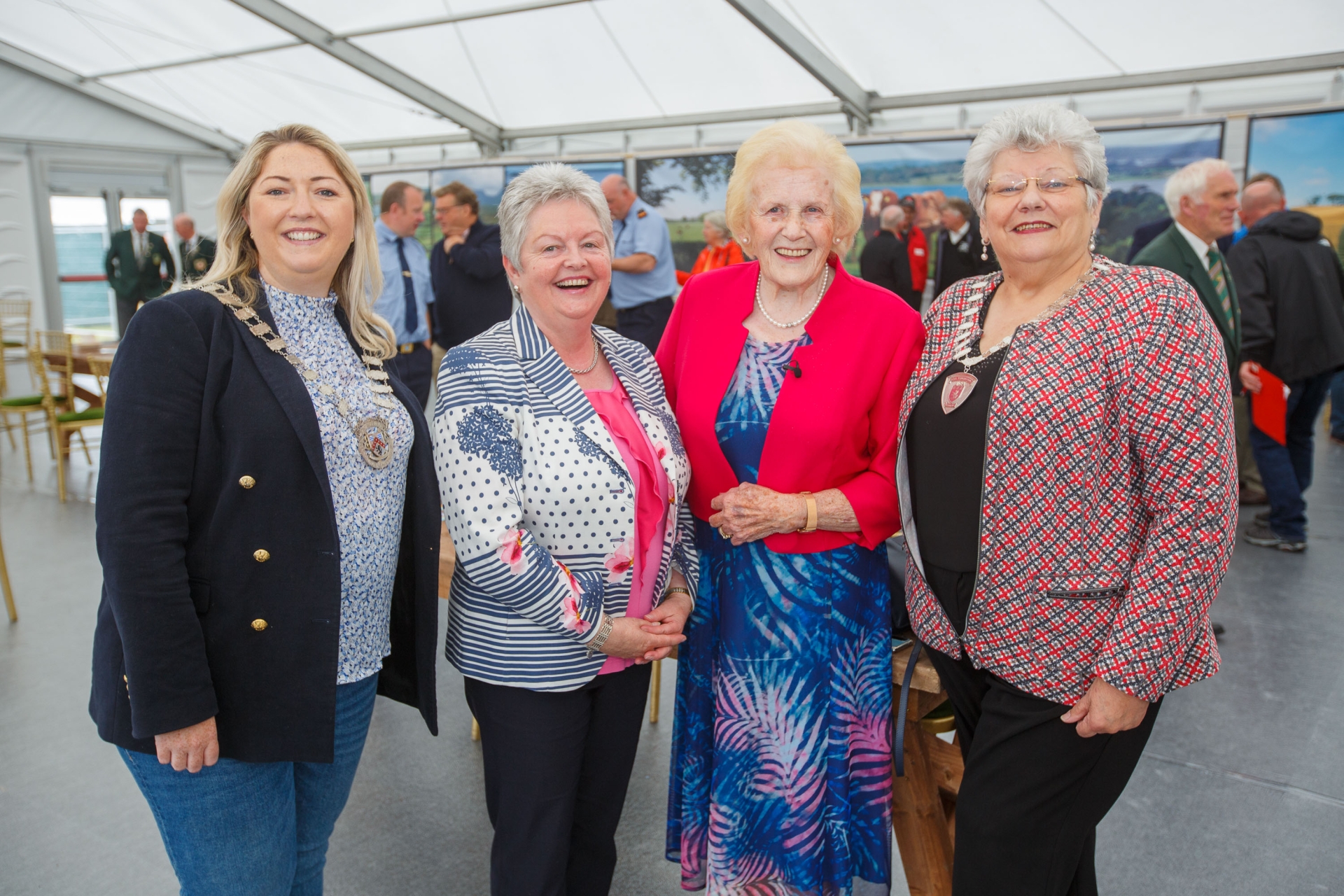 She is a Board Member of the World Ploughing Organisation, Chairperson of the Diocesan Finance Committee, and a Director of KFM Radio, she served on the board of Teagasc for five years, Laois Enterprise Board for 15 years and she is actively involved in several community organisations.

Here is a glimpse into Anna May’s world…

Q: Anna May your journey through the ploughing started in 1952 as a secretary to becoming Managing Director in 1973. That’s some journey when you consider all you have accomplished up to this very day.

"It’s some journey because I joined when I was 17 years old, from a very early age and all because of my late father. He was friends with the founder JJ Bergin from Athy, Co. Kildare.

"JJ Bergin was organising a ploughing competition, and, in those years, you are talking on a very small level and all horse ploughing. He asked my father if I could give him some assistance in the office, and I did.

"I went to the office on a Friday, after which I came home and said, ‘I’m not going back there anymore’. However, I did go back the next Monday and the rest is history! I’ve been there all my life and I just had a passion for organising things," she said.

How did you bring it from a small ploughing match to the biggest agricultural event in Europe?

"I was always looking for ideas and to add a bit of flavour to the event. I remember the days when there were only men folk coming to the Ploughing, and I thought 'we must do something about that'.

"In 1984 we introduced the fashion show, which was much to the disagreement of all the men I was dealing with, but when we had it, it was a great success.

"In 1988 we introduced the livestock, in 1995 we introduced the Hunt Chase because we were on a farm belonging to a man that was very involved in horses. Then we introduced the shopping arcades, where you could buy anything from a silk scarf to a leather coat. Not forgetting the famous Brown Bread Baking competition, which is always a great attraction.

"With all the additions to the Ploughing, it is very attractive to all members of the family and that’s what we have today, it’s a real family outing.

"Enterprise Ireland has also been with us for the past 11 years and they bring in prospective buyers from other countries, which is a major attraction for us. MORE BELOW PICTURE. 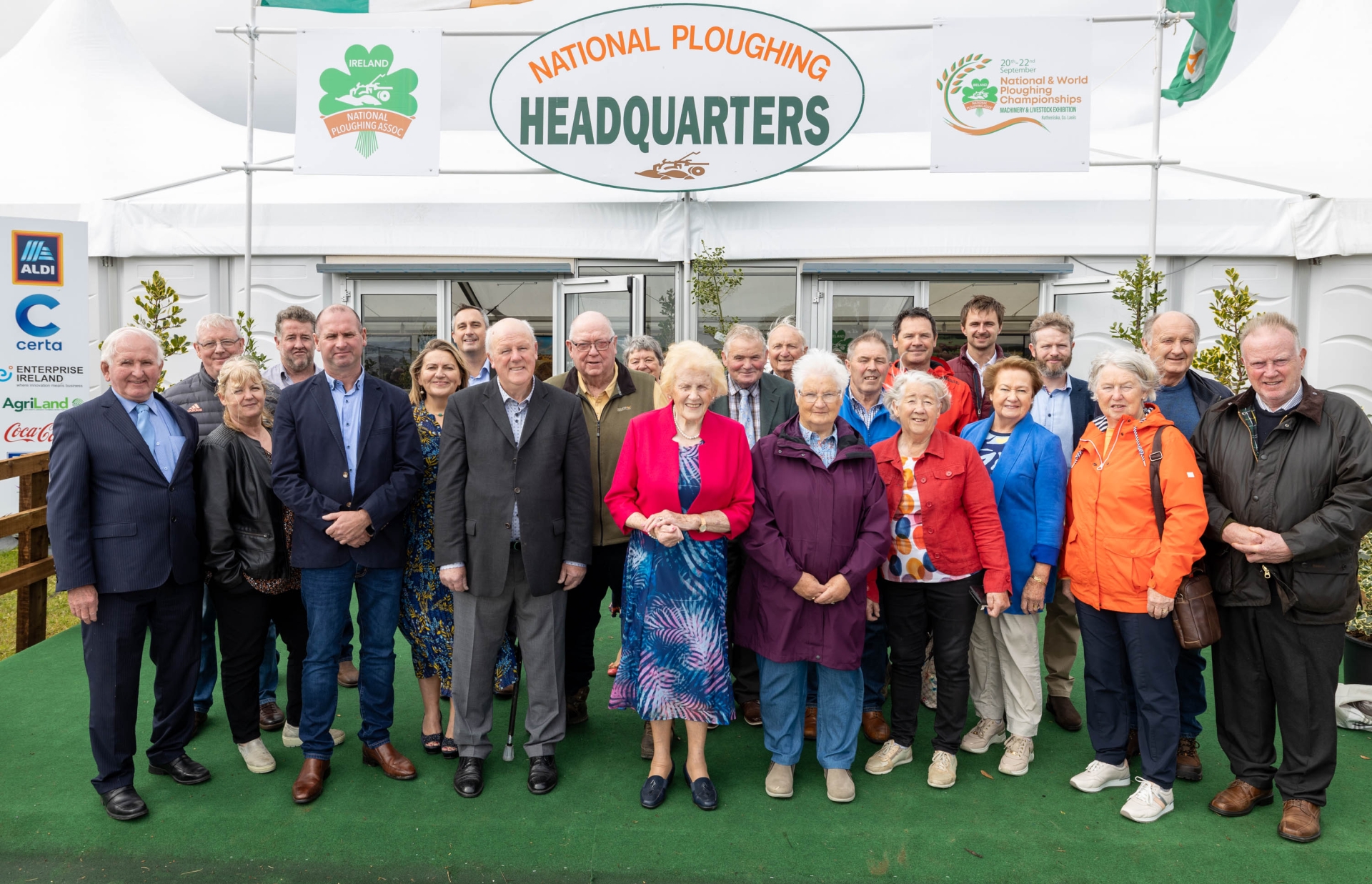 Land owners with Anna May McHugh on site at Ratheniska for the launch. Picture: Alf Harvey.

"We literally build a big village or a small town, you must have all the facilities there," she says.

The NPC is returning for the first time since 2019, what can we expect to be different this year?

"First, I hope we get good weather and that everyone is safe and free from accidents. Safety is always number one on my agenda.

"You can expect to see everything that you would want to see. If somebody goes home from the event saying, ‘there was nothing in it for me’, well I would not know what that person could need. I think we have everything from domestic appliances, to shopping arcades, to business, to livestock.

"Regarding the ploughing we have 311 competitors from all counties, and all in different grades in our national event," she says.

You are adding more this year, with a special last minute event, as Ireland hosts the 67th World Ploughing Contest. What a tremendous honour.

"Yes, it is, and we last hosted that in 2006. The World Ploughing Contest is on Wednesday September 21 and Thursday September 22. We have 26 counties competing.

"It will be a major attraction, particularly for our competitors from every county in Ireland. They want to see how the lad from New Zealand ploughs, sure he ploughs the very same as us with a tractor and a plough! MORE BELOW PICTURE. 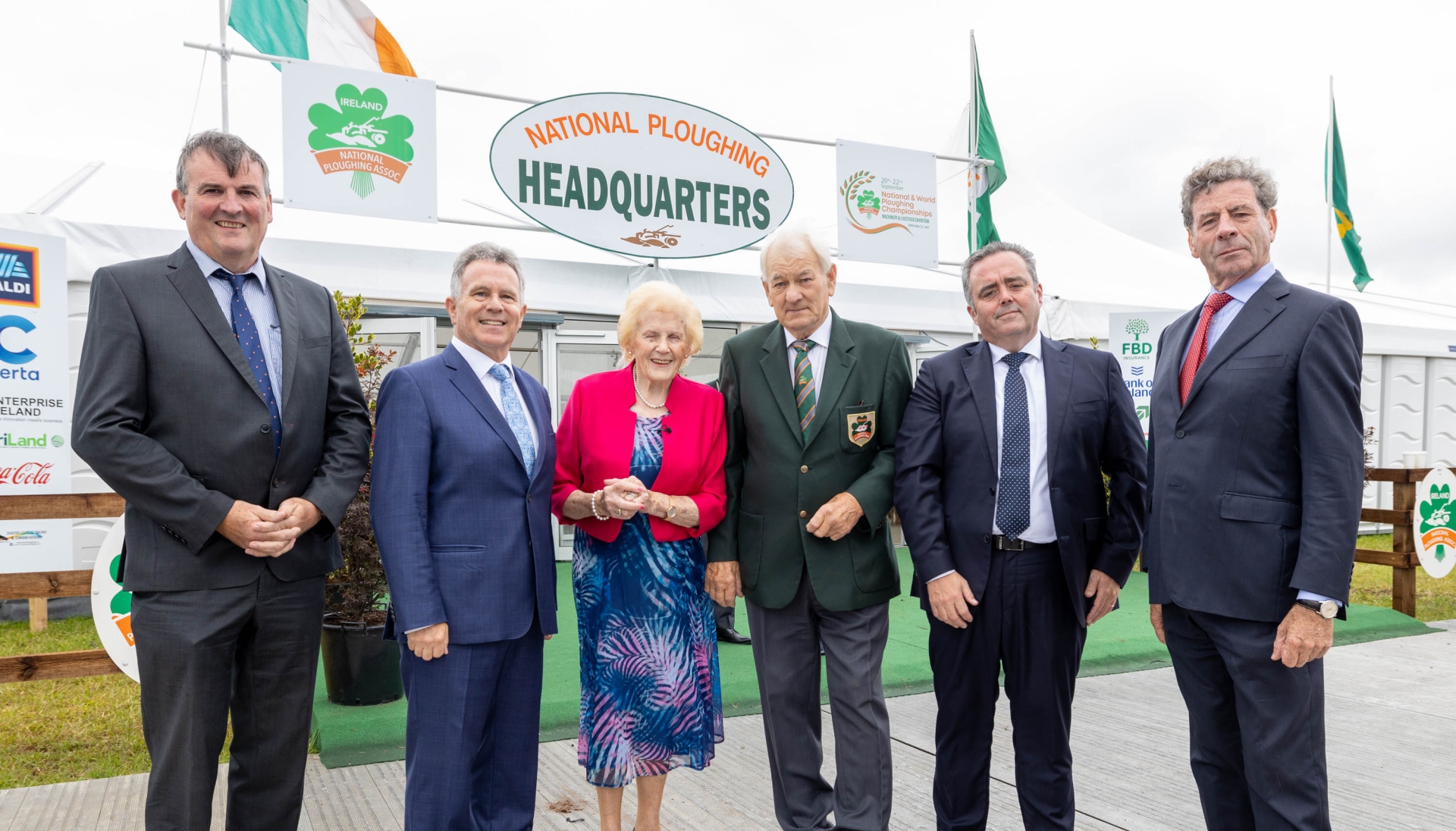 "It was supposed to be held in Russia this year, but that was called off in March. They asked if another country would take it on. If we didn’t take it on, it would have been the third year without a world competition. So, the Irish contingent thought that three years without a world event would leave it in a difficult place to ever get it going again.

"Hence, we decided to host it, with only four months to prepare! Some countries take a couple of years to prepare, but we are doing our best in the short time that we have," she says.

So what about the Irish participants.

"They have always been great competitors, but apart from that the Ireland family have been so helpful over the years, between stewarding and judging, even at Parish and County matches. They have been very good to us, and we are all thinking of them at this difficult time with the loss of their sister," she says.

Sat nav appeal made by Laois gardaí to Ploughing visitors

It’s no longer ‘a woman in a man’s world’, but back when you started out it was a different story. How tough has it been for a woman in this industry?

"I remember when I became Company Secretary first in 1956 and then elected Managing Director in 1973, I found it very difficult. In the years that I speak about, Women were not at the top of organisations as such. That’s all changed for the better today.

"They always rang up looking for Mr. Brennan (my maiden name was Anna May Brennan). I remember one time somebody saying to me on the phone ‘Sure what would you know about ploughing?’ You would think I was reared in a cap at the side of a road. Anyway, I responded by saying, ‘Ask me the question, and if I cannot help you, I will seek assistance elsewhere’. Sure enough, I was able to give him his answer. MORE BELOW PICTURE. 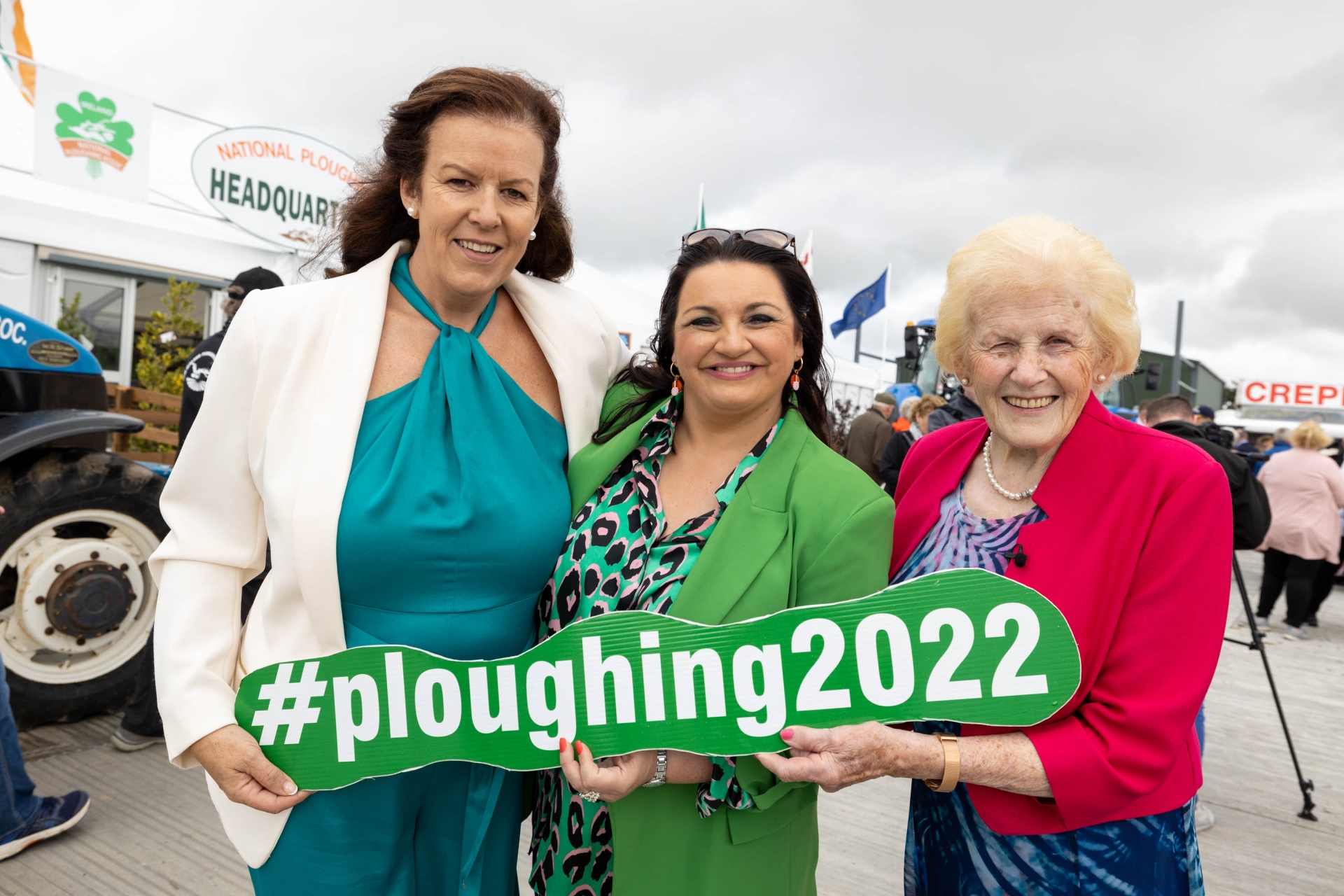 "When I did get fully accepted, I really have to say that the men folk were wonderful to me and very supportive. And because I was a female, I got away with a good bit! I can’t remember anybody ever saying no to me when I asked them to do something, but then again, I wouldn’t ask them to do it unless I wasn’t prepared to do it myself," she said.

From now until September 20, do you sleep?

"Very little! I wake very early in the mornings as I cannot sleep. For example, I woke up this morning at 5.10am and I kept thinking all the time. Plus, I am late going to bed every night, but it's just the time of the year, you want to get work done and you want to see it being done.

"Thanks be to God that I have great help and we work as a team," she said.

You have won so many awards, what one means the most to you?

"I always felt that I got the award because I was head of the Association, so I share it with all the members. I had great camogie days and I love my All-Ireland medals; I kept playing it until it gave me up!

"When I got Millennium Laois Person of the Year, I enjoyed that because I am from Laois. Also because it was local and I knew the people and it was about where I grew up," she concluded.

Upwards of 300,000 are expected to attend each day of the ploughing with the gates to the main Exhibition Arena open from 9am - 6pm. MORE BELOW PICTURE. 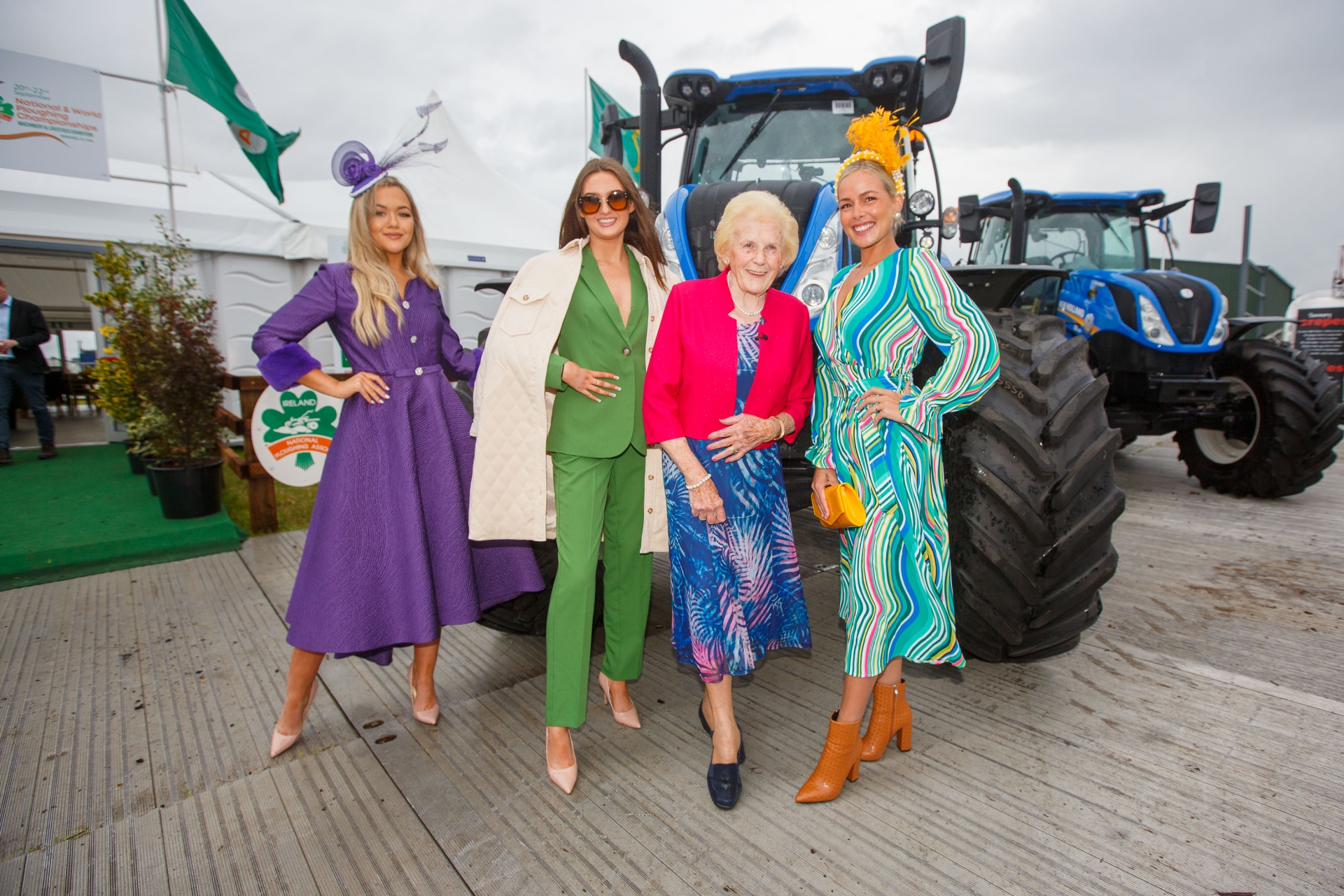 The Ploughing competitions take place from 10.30am to 2.30pm

The entertainment programme runs from 10am to  6pm each day with the fashion shows scheduled for 11.30am, 1.30pm and 3.30pm daily