Sunshine on Leith as tickets just went on sale. 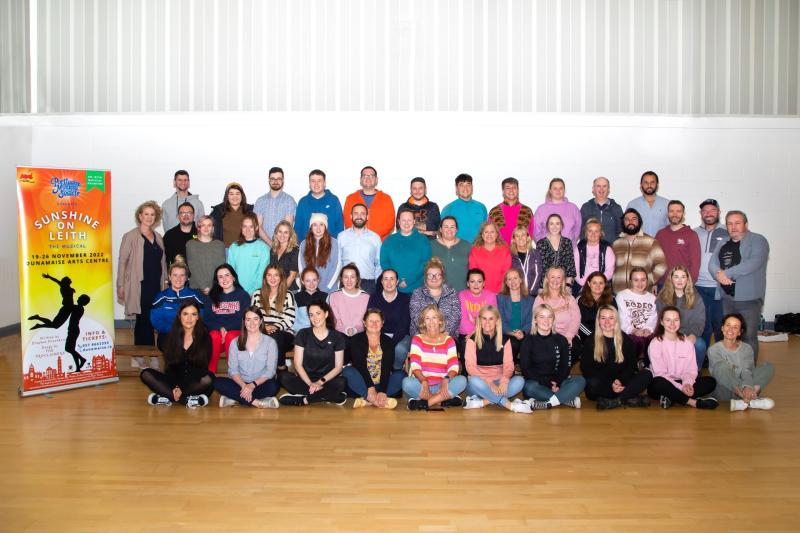 Portlaoise Musical Society are delighted to announced the sale of tickets for its first show since Covid-19 hit.

After a three-year interval, due to the pandemic, the Laois crew are proud to present the Irish musical premiere of the sensational stage hit show ‘Sunshine on Leith – The Musical’.

Featuring music by Scottish pop-folk band The Proclaimers, ‘Sunshine on Leith – The Musical’ is a funny, energetic and heartfelt piece of musical theatre about the power of home, family and love. The story follows the highs and lows of Davy and Ally, who, after coming home from serving in Afghanistan, have to re-learn how to live life in Edinburgh, together with their girlfriends and parents.

The society doesn't want you to miss the timeless songs of the much-loved Proclaimers, including I’m Gonna Be (500 Miles), Letter from America, I’m on my Way and of course the emotive Sunshine on Leith performed by the multi-award-winning Portlaoise Musical Society that is sure to raise the roof off Dunamaise Arts Centre and have its audiences buzzing!

JJ Tynan is the Chairperson of Portlaoise Musical Society. He said the team is delighted to be back.

“We are absolutely over the moon to finally be able to get back on the stage and bring some sunshine to the people of Laois in this gem of a show! We guarantee a week full of emotion and energy with lots of enjoyment for those on the stage and those watching! The music is well known and with our talented crew, we are confident of, yet again, raising the roof off Dunamaise Arts Centre,” he said.

The show runs from November 19 to 26 each. Tickets are €20 with a concession of €18 on Monday only. The curtain goes up each night at 8pm apart from Sunday, Nov 20 when it begins at 6pm.

Tickets can be purchased from the Dunamaise Box Office or at this link.

Sunshine on Leith is written by Stephen Greenhorn and features songs by The Proclaimers. Created & produced by Dundee Rep Theatre, Scotland’s leading production theatre. This amateur production is presented by arrangement with Music Theatre International All authorised performance materials are also supplied by MTI www.mtishows.co.uk

The show is made possible with thanks to the support of People First Credit Union and Laois Arts Office.