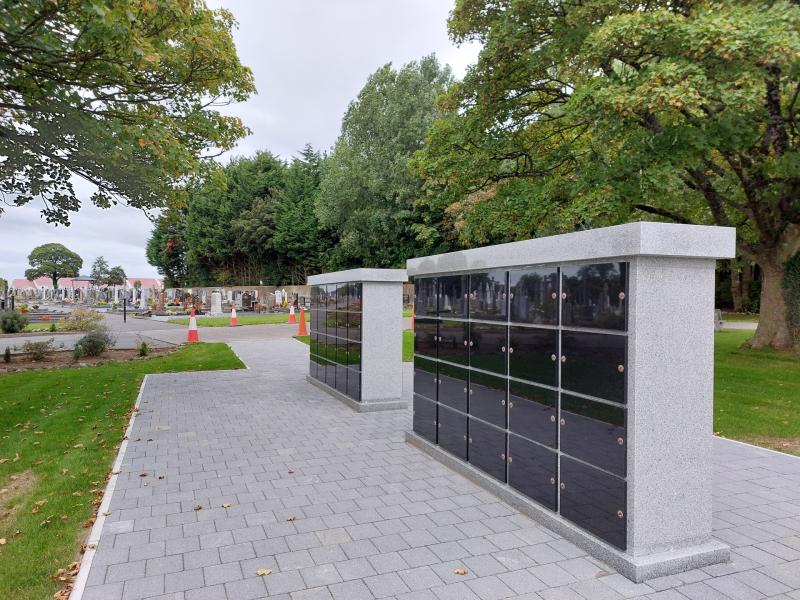 Laois has its first columbarium walls to store cremated ashes of loved ones but its construction has caused controversy in the county town.

The structure, commissioned by Laois County Council, in SS Peter and Paul's Cemetery, Portlaoise, contains 80 niches none of which have yet been occupied. However, a row has broken out over its commissioning.

Councillors in the Portlaoise Municipal District have accused Laois County Council of excluding any Laois construction companies from applying for the job of installation.

They claim the tender contract stipulated that the applicants must have built at least two columbarium walls already. However, the walls are relatively new to Ireland, meaning few companies or individuals could qualify with none from Laois having previously built any.

The meeting was told that Terry Swayne, Managing Director of Portlaoise Stone, met with Laois County Council's CEO John Mulholland. Mr Swayne, who volunteers on the cemetery committee, initially tendered in a joint bid but withdrew due to the lack of experience.

The local businessman was supported by councillors at the September meeting of Portlaoise Municipal District.

Cllr Catherine Fitzgerald led calls to install the walls for the past year, but criticised how it turned out. She is disappointed with not only the tender process.

"I welcome them however I am disappointed with the design. It is very different from what I was shown and agreed on. If it had to be changed, councillors should have been informed. We were told the design was in a semi circle. I am so disappointed.

"I am disappointed with the tender. No locals could apply because there was a clause that they had to have built two. I think our stonemasons in Laois are well capable of building one. The fact they were excluded while we spend our time promoting local business. Some do volunteer work in the cemetery as well. The fact that they couldn't apply was really wrong. Is that clause in for any other town? We are pro Laois and pro enterprise. Lessons need to be learned from this," she said.

"We need to get deliverance on who set this down. Terry Swayne has been onto us all. I got a meeting for him with the Chief Executive. I wasn't privy to the outcome, but we will wait and see what he has to say. It defies logic, it is mind boggling. Even if the stonework was of the highest spec, it could have been done by any contractor with experience," he said.

He also wants information on the prices for customers.

"I'm very concerned at the price they are going to cost. I presume you have had all this discussed. Are we going to be told and have nothing to do with the decision? If you are to divide the cost, is it self financing? Is there a clause for maintenance? Can you get more than one name in, like a family plot?

"All these questions need to be answered. I ask Laois County Council to discuss them with Portlaoise Municipal District, or the wider county, because anybody can be buried there if they ask. People who left Ireland are going to say they want their ashes brought back to Portlaoise," Cllr Aird said.

Cllr John Joe Fennelly felt the contract should have been awarded locally.

"The fact that nobody locally could apply to tender is an absolute shame. These people are giving their time and their skills to volunteer in some cemeteries. It is a shocking story," he said.

Cllr Noel Tuohy points out that if the clause means nobody in Laois will ever qualify.

"It is very disappointing that this person didn't have the right but were excluded, it's an absolute disgrace," she said.

"It's like asking somebody to do road marking but they have to show they did the very same thing," Cllr Thomasina Connell said.

The Portlaoise Town Manager is Director of Services Simon Walton.

"This tender would have been developed by the community department. In the normal course we are very keen that local enterprise be facilitated. Interested parties would appear to have been disqualified. It is obviously unsatisfactory. I will bring it to the attention of the community section," he said.

He suggested inviting an official to the October meeting of the district, but Cllr Aird objected and said the CEO John Mulholland must speak about it sooner.

"The buck stops with him," he said.