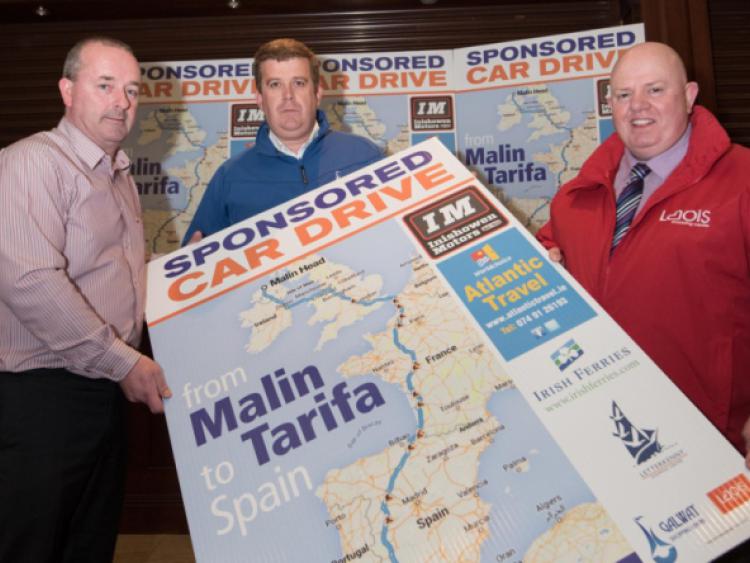 In echos of a certain cancelled TV motoring show, Mountmellick man Kevin Doyle and his two colleagues have accepted a challenge to drive non-stop from Ireland to Spain, in a people carrier.

In echos of a certain cancelled TV motoring show, Mountmellick man Kevin Doyle and his two colleagues have accepted a challenge to drive non-stop from Ireland to Spain, in a people carrier.

It is the latest in a series of hairbrained charity fundraisers taken on by the manager of Laois Shopping Centre, along with the managers of Letterkenny and Galway centres.

Kevin with Brian McCracken and Páraic Naughton, will leave Malin Head at the top of Ireland today, Tuesday May 5, and drive for about 37 hours to the most southern point of Spain, Tarifa, in a Kia Sorento.

Compared to previous feats, like pushing a shopping trolley from Letterkenny to Laois, or trekking across the Sahara, this one seems easy, but it will have it’s own challenges Kevin says.

Aself confessed nervous passenger, he expects to be awake for the 1,932 miles.

“It is the equivalent of driving seven times non stop around Ireland, so that makes it scary. There’ll be no onion sandwiches but lots of coffee,” he said laughing.

The trio will catch ferries at Hollyhead and Dover to France, driving down over the Pyranees to Spain, with only brief stops to refuel, buy food and use the loo.

They plan to take two hour shifts behind the wheel.

“That means a four hour break between drives. We will know our own limits, but the man in the passenger seat will get bored with any more than that,” Kevin said.

Car games could come inhandy. “We’ll be singing songs to pass the time,” said Kevin, thanking his family and community for their support.

Sponsor cards are available in Laois Shopping Centre, and feature a fun quiz with prizes of a two night break away.

With the car, fuel and ferries covered by sponsorship, all money raised goes to the Irish Cancer Society.