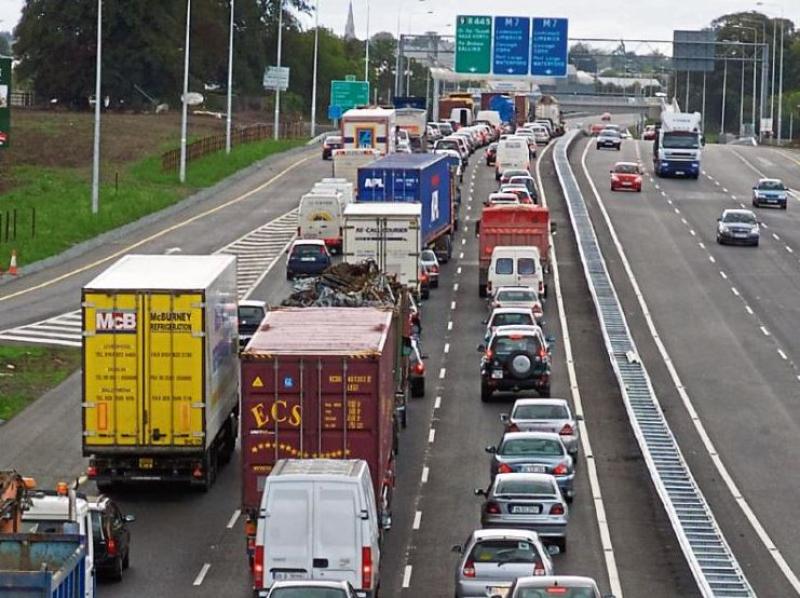 From Wednesday, January 3, and continuing for the next two years, Laois motorists can expect further delays on the N7/M7 road as a project to add a lane to the road begins.

The widening of the existing M7 motorway from two lanes to three lanes will apply to both eastbound and westbound for approximately 14km, between Junction 9 Naas North, at Maudlins and the M7/M9 interchange at Junction 11.

The work will include replacing and relocating the existing ramps at Junction 10 Naas South Newhall to the main Naas Newbridge dual carriageway, the R445.

Traffic management will be in place during construction along the M7 from Junction 9 Naas North to Junction 11 M7/M9 at various phases during the term of construction.

Two lanes of traffic will be maintained at all times between 6am and 10pm.  For the duration of active construction works there will be a special speed limit of 60kph in place. And an emergency lane will be available through the works at all times.

According to the latest CSO figures, a total of 11,477 Laois people commute outside of the county for work. Many of these commuters can now expect some long term delays on their morning and evening journeys.

More than 1,700 leave Portarlington each day for work.

The M7 carries approximately 70,000 vehicles per day and is the main connection to the M9 to Waterford, the M8 to Cork and the M7 to Limerick.

The work will also include a bypass of Sallins and a new Interchange at Osberstown and is expected to be completed in early 2020.

Since the economic recovery, and the widening of the N7 from Newlands Cross to Naas, congestion has grown on the major artery at rush hour. Evening time, in particular, has seen massive queues, stretching back well past Kill as the traffic deals with narrowing of the road at Naas north, and jockeying for position before the M9 exit to Kilcullen, Athy and Kilkenny.

The major works will also include the construction of a new interchange at Osberstown between Junctions 9 and 10 which will be designated Junction 9a.

n the analysis of some, improvements to traffic flow along the M7 corridor offers regional and national benefits by enhancing safety and reducing traffic delays for all road users travelling to and from Dublin, Waterford, Cork and Limerick.

Kildare County Council CEO Peter Carey, formerly of Laois County Council, has welcomed the work saying it would “not only underpin economic recovery in this country, but also represent a tremendous investment in our local economy, improving the attractiveness of Kildare as a location for business and tourism opportunities”.