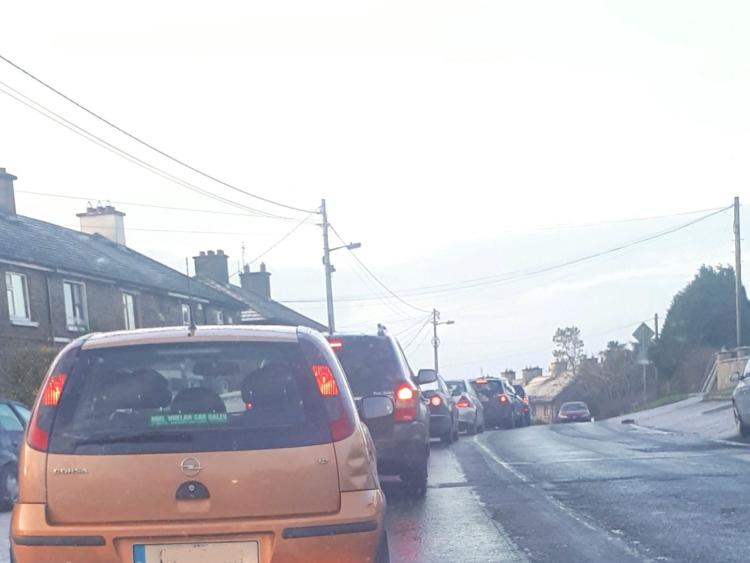 Traffic at a crawl on the Borris road in Portlaoise this morning January 17.

There were two crashes reported on the roads in Laois this morning, with roads remaining treacherous across the county and traffic at a crawl on untreated roads.

AA Roadwatch reported both crashes just after 8am this morning. The first was on the N80 road between Portlaoise and Stradbally.

There was significant build up in Portlaoise on the Borris Road which serves two big secondary schools.

Traffic across the county was at a crawl after overnight snows and freezing temperatures, with most rural roads in Laois not gritted by Laois County Council.

#LAOIS There’s been a crash on the N80 Portlaoise/Carlow Rd between Stradbally and Portlaoise. https://t.co/PSzIBsvOzE

The second crash was on the M7 motorway between both Portlaoise junctions.

Meanwhile, reports are coming in from people experiencing very slippy conditions on roads and paths around the county.

Just slid from Abbeyleix to Portlaoise at 40km/hr. Very dangerous conditions and no grit @LaoisCouncil

No roads salted around the Portlaoise area this morning, by extension this must be for all of Laois. Take care. @LaoisCouncil

All roads in Kilkenny kindly gritted, pass into the Laois border and it’s the Swiss alps- sound. #snowday