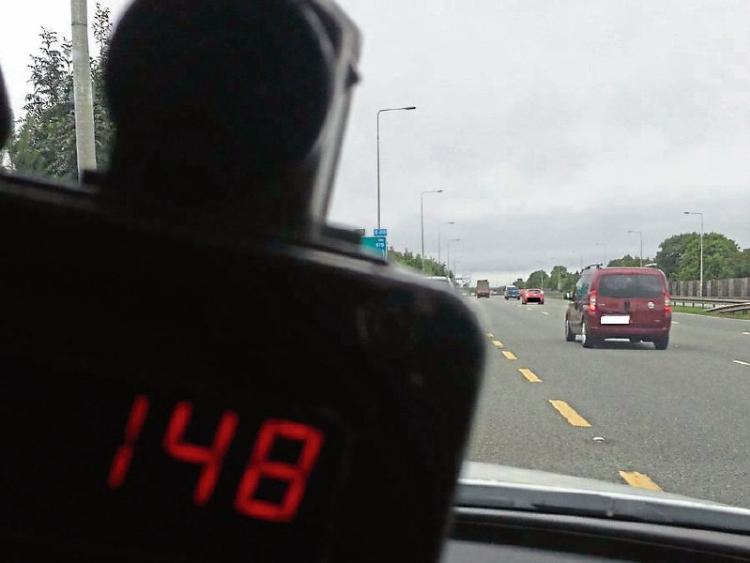 A motorist was clocked by gardaí driving at a astonishing 151 km/h in a 100 km/h zone near a small Laois village last week.

The driver as detected on the October 13 on the the R445 Clashnamuch, Pike of Rushall. He was one of the 241 drivers who were travelling over the speed limit around the country that day. In another part of the country a vehicle was detected less than 150 meters travelling at 90 km/h in a 50 km/h zone.

As a result of the ongoing problem Garda Síochána will conduct a national speed enforcement operation "Slow Down” and Laois and counties across Ireland over the next two days to clamp down on potentially deadly speeding on Irish roads.

Supported by the Road Safety Authority and other stakeholders, for a 24 hour period from 7am on Friday 20th October to 7am on Saturday, October 21.

The objective of the planned operation is to reduce the number of speed related collisions, save lives and reduce injuries on our roads.  The aim of "Slow Down day” is to remind drivers of the dangers of speeding, increase compliance with speed limits and act as a deterrent to driving at excessive or inappropriate speed.

The operation coincides with Storm Brian striking the country and the gardaí hope the storm and checks will be a dual reason for motorists to cut their speed.

In terms of road safety, there was a marked increase in road deaths in 2016, resulting in 187 road deaths. Although there have been fewer road deaths this year compared to the same period in 2016, we can never be complacent about road safety. Excessive and inappropriate speed is a major contributory factor in road traffic collisions, further confirmed by the recent RSA report on fatal collisions between 2008 and 2012 which found that excessive speed was a contributory factor in one third of all fatal collisions during that time.

"We appeal to drivers to work with us and play their part in reducing injury and tragedy on the road, by supporting our National Slow Down day. Please stick strictly to the posted speed limit, but if the road, traffic or especially weather conditions dictate...reduce your speed even further. This will make the journey safer not only for you, but for every road user sharing the road with you.”

The operation will consist of high visibility speed enforcement in speed enforcement zones, which now number over 1,000, as well as the delivery of a road safety message through the use of national, local and social media.  In addition, Garda personnel will man display stands in key venues to provide road safety advice and distribute road safety leaflets.

Government Departments, Local Authorities, Public and private sector fleet operators have been invited to participate in the initiative by circulating employees with the key message to "Slow Down” and, whether driving for business or private purposes, to always drive within the speed limit and at a speed appropriate to the prevailing conditions.

98,465 vehicles were monitored and 241 vehicles were detected travelling in excess of the applicable speed limit.  The highest speeds detected were as follows:

The objective of "Slow Down” is to reduce speed and make the roads safer for all road users.

The following are some** of the locations where speed enforcement is scheduled to be carried out from 7am Friday 20th October 2017:-

**This is not an exclusive list of scheduled speeding locations throughout the day. The above locations have a history of speed related collisions. Please reduce speed to reduce risk and avoid potential for detection. All speed enforcement zone locations are available on the Garda website. The penalty for speeding is 3 penalty points and an €80 euro fine if paid within 28 days.

Since Monday, the 15th November 2010, new Garda mobile safety cameras are in use across Irish roads.

GoSafe provide a minimum of 6,000 enforcement hours and a maximum of 1,475 survey hours per month across the country. For the 6,000 enforcement hours, the cameras will operate from vans which are marked with high visibility reflective material and display a safety camera symbol. Images of the vans are available on the right hand side of this page.

The survey hours will be conducted from unmarked vans, in order to accurately observe and record the speeds at which vehicles are currently travelling, for survey purposes only.

Gardaí use a range of speed detection technology to reduce speed across Irish roads. A reduction in speed will lead to a reduction in the incidence of fatal and serious injuries and will improve road safety for all road-users.

We are working closely with a range of partner agencies, including Government Departments, the Road Safety Authority, the National Roads Authority, and the community, in order to develop a national culture of safe road use.

There are 1,031 sections of road identified as speed enforcement zones effective from the 27th May 2016.

Ongoing surveys will be conducted to ensure that these sections of roads continue to represent locations where speeding is happening. The map will be updated accordingly.

These sections of the road network will be where An Garda Síochána will be primarily focussing our enforcement. We will use a range of equipment such as: