Streetlights are shining 24 hours a day on this Portlaoise road 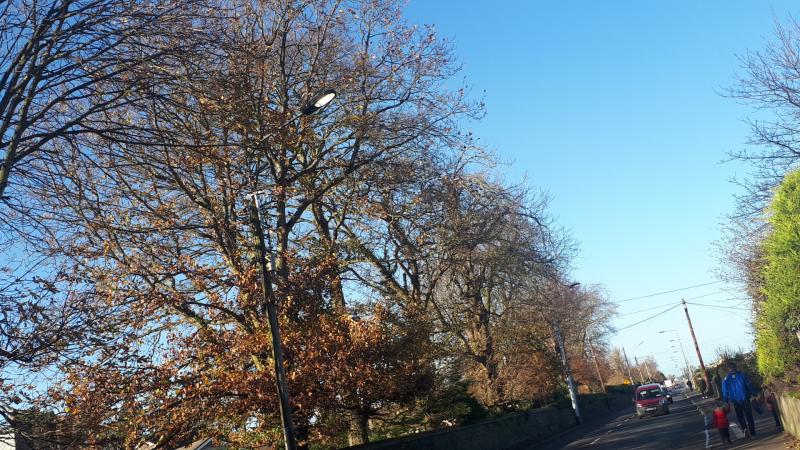 Portlaoise streetlights on in bright sunshine

While many rural parts of Laois are seeing a rise in crime with the dark evenings, the streetlights cannot be turned off in a Portlaoise housing estate or on the main road beside it.

One resident of Newpark in Portlaoise who alerted the ESB and County Hall of the problem a week ago, is demanding to know why taxpayers money is being wasted.

The homeowner noticed that the streetlights are on day and night in the large estate on the Mountmellick road, as well as a lot of the lights along the main N80 road.

He said that it began after Storm Ophelia hit.

"I rang the ESB in early November, they said to ring Laois County Council. I rang the council and they thanked me for telling them, but the lights are still on a week later," he told the Leinster Express.

"This is a waste of taxpayers money, and property taxpayers money. When they are needed at night they will have burnt out. It's annoying. I am guessing it is a faulty switch but it shouldn't take that long to fix it," the gentleman said.

Town Manager for Portlaoise Kieran Kehoe told the Leinster Express that it was installation of broadband by SIRO and ESB Networks that damaged the ESB Network's own equipment.

The council must wait for ESB Networks to fix its own damage, while footing the bill for electricity.

"The Local Authority and its appointed PL Contractor is bound by the provisions of a jointly agreed ESB Requirements for Work on Public Lighting on ESB’s Networks. Under this agreement with ESB Networks , ESB Networks retains operational control for the switch-wire system on ESB Poles (i.e. all changes, connections, repairs, upgrading etc. to system must be carried out by ESB staff or a Contractor appointed by ESB.  The work has to be notified to and approved by the nominated ESB System Manager in accordance with ESB Procedures for Working on LV Networks)," Mr Kehoe said.

It is an isolated problem.

"This is not the situation anywhere else and is an unusual occurrence," the town manager said.