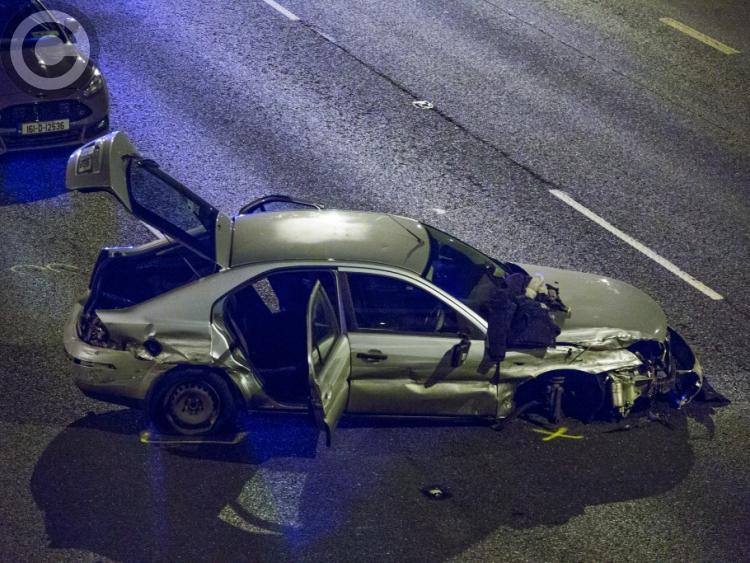 One of the vehicles involved in the crash on the N7 at Johnstown. Picture: Tony Keane/Leinster Leader

Gardaí at Naas investigating a serious collision on the N7 Naas Road at approximately 3.45pm on Thursday, December 28th are appealing for information.

Investigating officers are particularly anxious to speak to any driver who may have dash cam footage of a silver Ford Mondeo driving dangerously northbound prior to the large collision to contact Naas Garda Station on 045- 884300, the Garda Confidential Line 1800-666-111 or any Garda Station.

The collision occurred on Thursday, December 28. At approximately 3pm that day Gardaí received a report of a burglary at house in Athy. The intruders were disturbed and fled from the scene in a waiting car when the occupants of the house returned home.

During a follow up operation members of a Garda anti-burglary unit intercepted a car on the N7 Naas Road at approximately 3.45pm. The car initially stopped for Gardaí but when approached took off at speed in the direction of Dublin.

Moments later this car was involved in a collision with a second car at on the N7 at junction 8, Johnstown. One of the occupants of the car, a man in his teens, injured in the collision was taken by Ambulance to Tallaght Hospital.  Three other youths, all male and understood to be in their teens, were arrested during follow up searches near the crash site a short time later.

See also: Garda appeal for information on serious crash on the N7