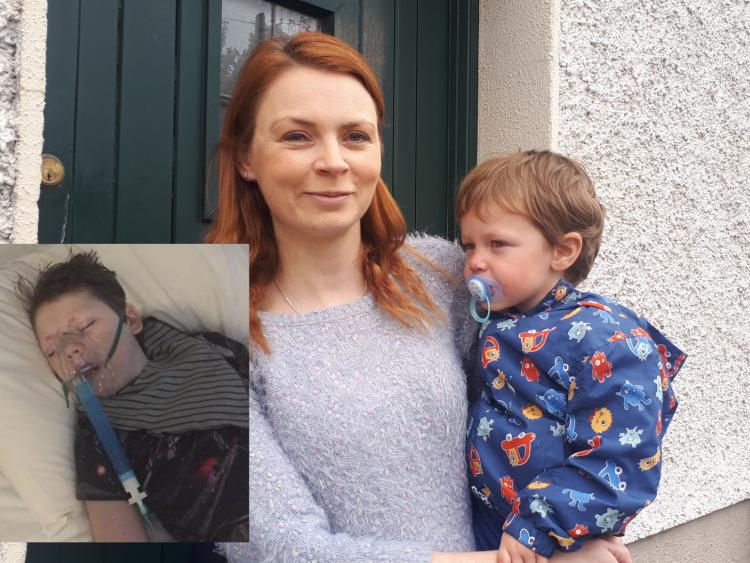 Nicolette with Billy and (inset) Ben. Her son Jake sadly passed 2 years ago before the house was built.

Smiley nine year old Ben Connolly from Mountmellick in Laois is tantalisingly close to moving into a purpose built home for his extreme special needs, after four years of incredible donations from near and far.

Ben and his late baby brother Jake, pulled heartstrings when their parents Nicolette and Terence went public with a plea for money to build a home suitable for the boys needs, back in 2014.

They live in a cramped two storey semi detached town house, with no room to install a lift or hoists or washroom, and hospital equipment and medical supplies taking up most of the space.

The parents gave up work after Jake was also diagnosed as the boys needed 24 hour nursing care.

At one point they were in fear of losing their home as they fell behind in mortgage payments but Bank of Ireland has held off since then to allow the family live on at home.

One bright little spark for the family is son Billy, who was born three years ago and luckily has not got the syndrome.

Sadly little Jake lost his battle for life in January 2016. The couple have also since separated.

The focus for them remains on caring for Ben and hoping the house is finished in time.

Below: Jake, Ben and Billy. 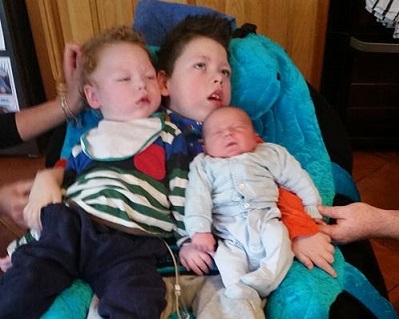 Nicolette spoke to the Leinster Express at home.

“The last time Ben ended up in hospital, he had an underlying cold that brought on an attack. We gave him two doses of medicine to stop the attack but they didn't work. He got another dose in the ambulance on an IV but it still didn't stop. Finally in hospital he got phenobarbitol. He hasn't had that since he was three. If that hadn't worked, he would have been transferred to Temple Street and ventilated, and it would be up to the man above after that,” she said.

Ben recovered and returned home last week, but the seizure is one of many this year.

“It's a worrying time. It's hard to see him in distress. From the age of 3 he had very little attacks, maybe three in a year. Now every other day he is having a seizure and they are harder to get under control. We have not many options left,” she said.

Ben spends all his time in his hospital bed at home. Music and cartoons like Peppa Pig and Ben and Holly, and interaction from his carers give him comfort.

“He is still being bed bathed, there is no room for a hoist even though for his internal organs and chest he needs to sit up. He doesn't get to see anywhere outside the house. The fear always is that he will be taken before the new house is finished,” Nicolette said.

“A huge thanks to everyone who donated and continues to donate. The house will go to another charity or family or the money sold and given to a charity. It would just be very sad if Ben does not get to avail of it. Time is of the essence,” she said.

Terence showed the Leinster Express around the new house, which needs, tiling, bathrooms, doors, floors and stairs, but has ceiling hoists fitted.

“It would be a great thing for him, he would have full mobility of the house, and be able to enjoy the garden as well,” said Terence.

“If we can just get it done. The support so far has been terrific, hopefully we can get the help to get it to the finish for Ben,” he said.

Below: Terence and Billy at the new house. 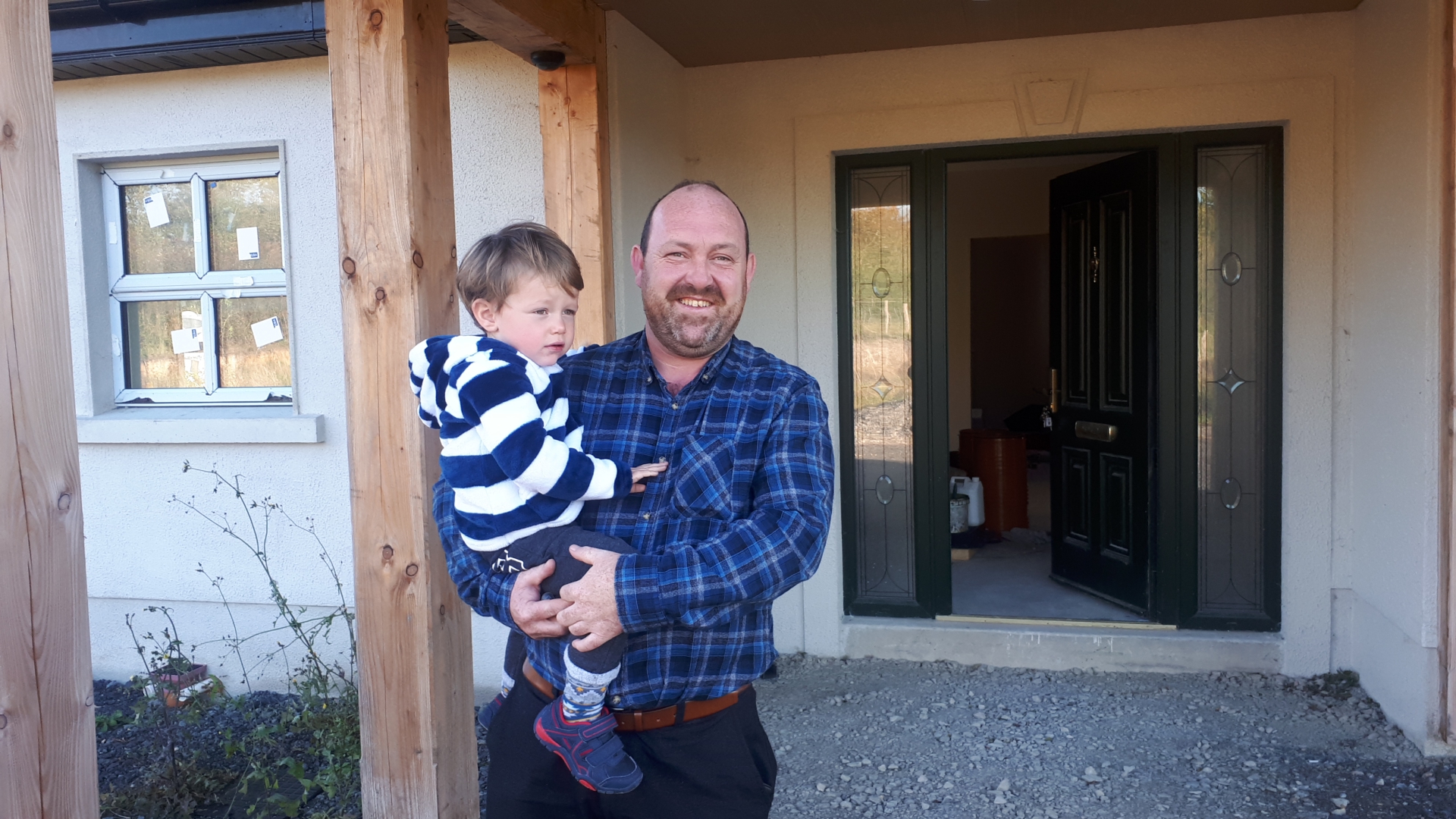 The Ben and Jake Connolly House is the result of an outpouring of support from fundraisers, donors and tradesmen giving free time.

Since 2014, people from Laois and all over Ireland have donated €302,000, from countless coffee mornings, runs, golf days and the text donation line. Of that, €267,000 went directly to building the house, the rest to the family's bills, including buying them a wheelchair accessible vehicle for the boys.

Along with the valuable free time given by many trades , they received about €50,000 worth of materials. The house is on a country site near Upper Forest Mountmellick that was kindly donated to the Ben and Jake Connolly Trust.

Volunteer trustees Joe McEvoy and PJ Dempsey oversee its construction and ensure that all the money raised is put to its best use, leaving Ben's family to focus on him.

The 3,500sq ft dormer house, will offer space for a family of children with special needs and their carers. Building began in March 2016, but progress slowed last year.

The hope was that the family would be in by Christmas, but that has been extended to next March.
Fundraising also slowed down.

Joe again thanks all the donors.
“We can't thank people enough. It is a phenomenal amount of money, and we hate to say we need more.

“It is impossible to keep that momentum going. to I am saddened that we are not further progressed, we are doing all we can.I hope in the next four weeks that we have the underfloor heating up and running. Once that happens, others will fall into place,” he said.

They have got a plumber, a carpenter, a tiler and kitchenmaker all lined up waiting to give their time free.
“We next have to buy doors and architraves, white goods and sanitary ware but we are hoping companies will donate these,” Joe said.

He explains what the house can offer Ben.
“Their house now has no lifting facility, no washing facility. The new house will have a clean air circulation system with a constant temperature, which is important to prevent infections. It will have a big bedroom for Ben, a separate washroom, a sensory room where his nurses can bring him and he can enjoy peace and music, and storage for his medications.

“To see him in that space would be wonderful,” he said.

In the long term, the house may be given to a suitable charity, dissolving the local Trust.
“We haven't looked that far, we did speak to Laura Lynn before but they didn't give us a commitment, as they have a house in Dublin and they focus on providing nursing care to children in their own homes. We are open to any charities interested in talking to us,” Joe explained.