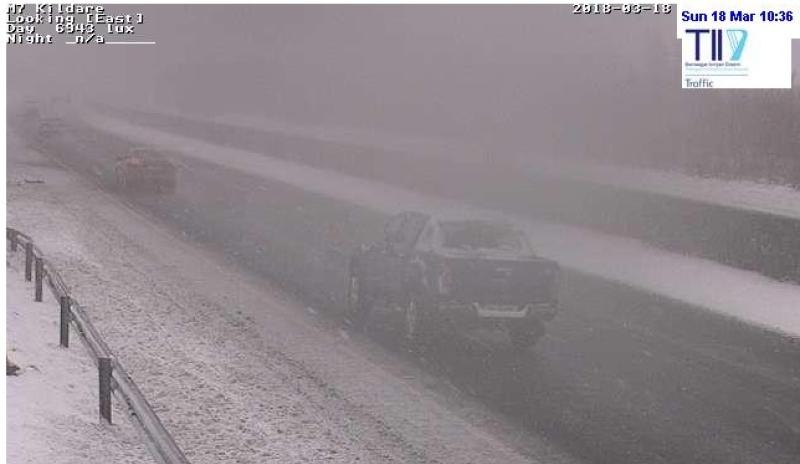 Gardaí have urged motorists to take care if they have to venture out in the snow and ice with the Status Orange Snow Ice alert alert now in place for Laois, Kildare, Dublin and other Leinster counties.

They say visibility is reduced due to the wind and snow. They say that if travelling make sure to have your lights on and slow down. They have also tweeted that many roads are slippery and with the low temperatures there may be black ice in places.

Transport Infrastructure Ireland and AA Roadwatch reports that snow is making for hazardous driving conditions on motorways and other roads.

Latest images from TII show the M7 motorway clear around Portlaoise. However, the conditions worsen significantly in Kildare approaching Dublin.

The AA says secondary routes are badly affected throughout the midlands, east and south-east this morning so take extreme care when taking to the roads. it advises that it takes up to ten times longer to stop a car in snow or ice.

Here is the latest from the AA on how the snow is impacting roads and travel around the country:

DUBLIN
Conditions are very slushy on main routes (M50, M2, N3, N4, N7, N81, N11) with many down to one lane due to the snow, which continues to fall in places. Many secondary routes are also treacherous, especially around areas of high ground. Drive with extreme care.

LEINSTER
CARLOW: Lying snow is an issue for motorists on routes around Carlow and Tullow.

KILDARE: There is heavy snowfall on routes throughout the county. As a result, Gardai are advising motorists not to travel unless necessary.

LAOIS: Slippery conditions following snow on the M7 between J18 Portlaoise West and J16 Portlaoise East. Snow and icy conditions also on most routes around Portlaoise and also in Mountrath.

MEATH: Very poor road conditions due to snow and ice throughout the county. Extreme care is needed especially around Ashbourne, Navan, Kells and Enfield. We've had numerous reports that the M3 is treacherous around J10 Kells.

OFFALY: Road conditions are treacherous due to snow and ice around Tullamore, Offaly. Take extreme care on all routes in the area. There's also snow around Birr but Gardai say roads are passable with caution.

WICKLOW: Gardai advise care on all routes around the county particularly in areas of higher ground due to snow and icy conditions. Conditions are treacherous in Baltinglass and Arklow so don't travel unless absolutely essential. Roads are also very bad around Enniskerry.

MUNSTER
TIPPERARY: Around Thurles, conditions are slushy around the town. It's particularly bad on the M8 around J6 Thurles, where the on and off ramps are treacherous according to Gardai.

CONNACHT
ROSCOMMON: There is some snow on routes around the town, Gardai advising particular care on the N61 (Athlone Rd).

NATIONAL TRAFFIC
KILDARE: There's a collision in the median eastbound on the M4 at J7 Maynooth. Further east, a collision has been cleared at J6 Celbridge.

There is a collision on the M7 northbound between J13 Kildare and J12 Newbridge. Take extreme care in the area as conditions are very poor due to snow.

WATERFORD: A truck is no longer stuck in the snow in Tramore at the junction of the Old Waterford Rd and Main St.

TRAVEL
IRISH RAIL: DART services are operating with delays of up to 45 minutes due to snow.

Bus transfers will operate between Limerick Junction and Waterford until further notice due to flooding on the line.