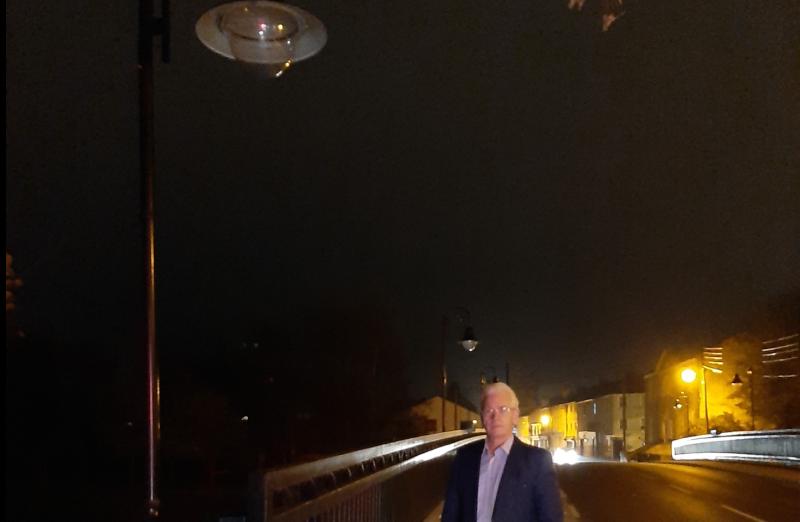 Cllr Aidan Mullins at one of the unlit lights in Portarlington

Laois County Council must put the pressure on the ESB to connect lights in Portarlington when required according to a public represenative who doubts the State-owned electricity company will deliver due to their track record in Laois.

Cllr Aidan Mullins, Sinn Féin, expects the all clear to be given to the ESB to begin work in 2022 on connecting new street lamps in the town centre following the extensive undergrounding of cables.

However, speaking at the Portarlington Graiguecullen Municipal District meeting, Cllr Mullins had has doubts about the firm's capacity to deliver.

“With the past performance of the ESB, I would not be hopeful that they are going to come in on time,” he said.

He accepted that disruption caused by ESB starting work before Christmas would not be desired but he wants no delay in the new year.

“I would ask that the council put pressure on the ESB to connect the new lamps when you want to start so that they do not come back with the same poor performance elsewhere around the county,” he said.

Cllr Mullins said new lights at pedestrian crossings in Laois are also awaiting connection to the power by the ESB.

“That has been going for months,” he said.

The ESB told the Leinster Express that ESB Networks connections in relation to street lights – as with other electricity connections – generally require a lead-in time of 12 weeks. It said these works are often expedited where possible.

It said their supervisors and manager are in liaison with Laois County Council's lighting contractor who say there are no outstanding public lighting works in Portarlington.

They says the there two pedestrian lighting connections outstanding and Laois County Council's electrical certification was registered against this connections on November 17 adding that these should be connected by early next week.

A statement added that ESB Networks connected the Barrow Bridge Street lighting in Portarlington on schedule in 2020.

"But we understand there may have been a delay on the part of the contractor working on behalf of Laois and Offaly Count Councils to complete the necessary works to switch them on," it said.