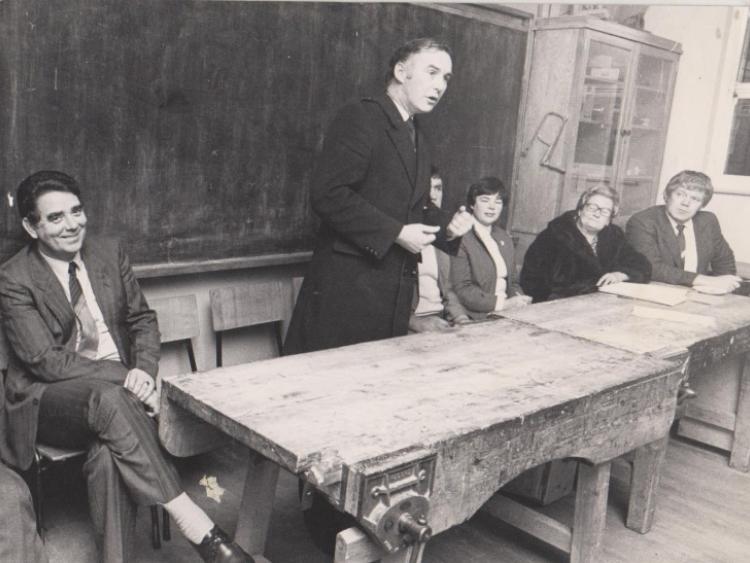 Jerry Lodge, Chairman of Laois VEC addressing a meeting in Mountmellick Vocational School. On the left is Ronan Rice, CEO of Laois VEC.

JERRY Lodge died in office. The senior member of Laois County Council, he was 51 years a public representative.

In that time, he never lost a local election. He seemed to know instinctively what keys to press to ensure poll success—a success that intrigued some of his less fortunate political colleagues.

Jerry's gentlemanliness and innate courtesy, camouflaged an incisive intelligence and, if unavoidable, he could, and would, deflate those of an importunate disposition.

Had he been elected to the Dáil, there is no doubt that mastering a ministerial brief would have presented him with no difficulty.

He did contest four general elections for Fianna Fáil, but Leinster House eluded him. Maybe, as some suggested, he lacked the necessary ruthlessness or killer-instinct?

A member of one of the town’s longest-established families, Jerry was a proud Portlaoise man, but was not parochial. Laois was important to him, and Ireland, and he served a term as a very impressive Chairman of the County Council.

He also headed Laois Vocational Education Committee for a number of years when he and Chief Executive Officer Ronan Rice, now also sadly departed, did much to promote and improve education in the county.

The eldest of three children, Jerry was a son of Jerry and Lily Lodge and was reared in a mostly working-class community on the New Road, a real old part of Portlaoise.

Jerry Lodge Snr was a popular local figure, of unapologetic republican views. He served a period on Portlaoise Town Commission. Lily Lodge, his wife, was a good neighbour, blessed with a great sense of humour.

It was a fellow New Roader and relative, Christy (Daz) Scully who in 1967 proposed young Jerry Lodge as a Fianna Fáil candidate for the Town Commission. Ned Connolly, of the Green Road, seconded. (He died just a few weeks ago).

Came the local elections, and Jerry was elected, the youngest public representative in Laois. There was a problem, though. He was living about 100 miles away, in Fermoy, Co Cork, where he was a technician in the Moorepark dairy research station. And he had no car.

His solution was to thumb a lift to Portlaoise for Town Commission meetings. After staying overnight with his parents, he would return to Fermoy in a Kelly’s Foundry lorry.

Jerry was on the Town Commission (later Town Council) from 1967 until its abolition some years ago. When he first joined it, Madge Aird, grandmother of Cllr Willie Aird, was in the Chair. Eugene McCourt was Town Clerk.

Busy decades followed for Jerry. He married Patricia O'Keeffe from Newmarket, he returned to Portlaoise and established an insurance business, he was first elected to the County Council in 1974.

With the late and much-lamented Kathleen O'Brien, Jerry was a driving force on the Tidy Towns Committee and, having  traded his usual sartorial elegance for a high-viz jacket, he was a familiar figure as he laboured voluntarily on Portlaoise’s streets.

In the early 1990s, Jerry courageously opposed official County Council policy by serving on the committee that campaigned successfully for a Town Park in the former Onions' field at New Road.

One of the entrance ways to that park goes through what was once the Lodge family garden. It would, perhaps, be appropriate to rename the park in Jerry’s honour.