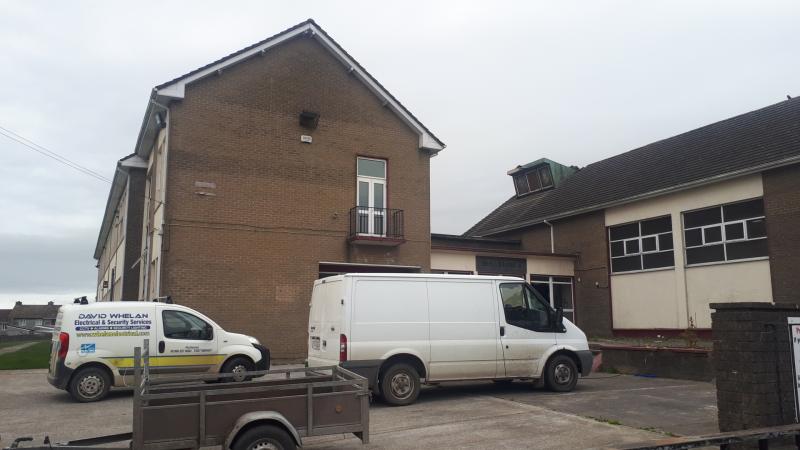 Portlaoise parish has reluctantly hired a security company to protect a vandalised building waiting to be demolished.

The old St Paul’s school site on the Borris Road is owned by the Parish, who have given use of it to the Department of Education for a new building for St Francis Special School.

The new school was to be ready to open in September, but demolition and construction has not yet started, to much local disappointment.

Since it was vacated in June 2017, St Paul’s has been wrecked by vandals, with a fourth fire extinguished by Laois fire crews last weekend.

Parish Priest Monsignor John Byrne up to now had said he would not waste parish money to board up a building set to be knocked, but has reluctantly hired a security firm.

“We have engaged the security firm Netwatch to try and protect the building. It’s unfortunate that that’s where we are at, protecting a building that’s going to be demolished. It’s in such a state, hopefully it will not be longer than three months,” he told the Leinster Express.

The security measures do not include hoarding or boarding up the school, which has most of its windows broken and front doors smashed open.

The building will instead be remotely monitored by the Carlow firm, with audio speakers to warn intruders, and CCTV cameras to identify and report them to Portlaoise Garda Station.

“It is expensive,” Msgr Byrne said.

He is “disappointed” that parish donations must be spent to protect a building that will be knocked.

“This time last year the department were asking me when would the building be vacated. And when we did vacate it in June, there didn’t appear to be much urgency anyway. I don’t know how their timeline got so badly skewed,” he said.

“We’re all dealing with scarce resources, we have an obligation to spend money wisely, this is people’s money. It just appears to be a waste. I would like the department to at least organise the demolition,” Msgr Byrne said.

He is hopeful the security will be enough to stop further attacks on the old school.

“I’m asking the Gardaí to respond to Netwatch, and now that the building is under this monitoring, please God it will keep it safe for this period of time,” the Parish Priest said.

A tender process is underway by the Dept of Education, who say work is expected to begin on site in the June - September period this year.