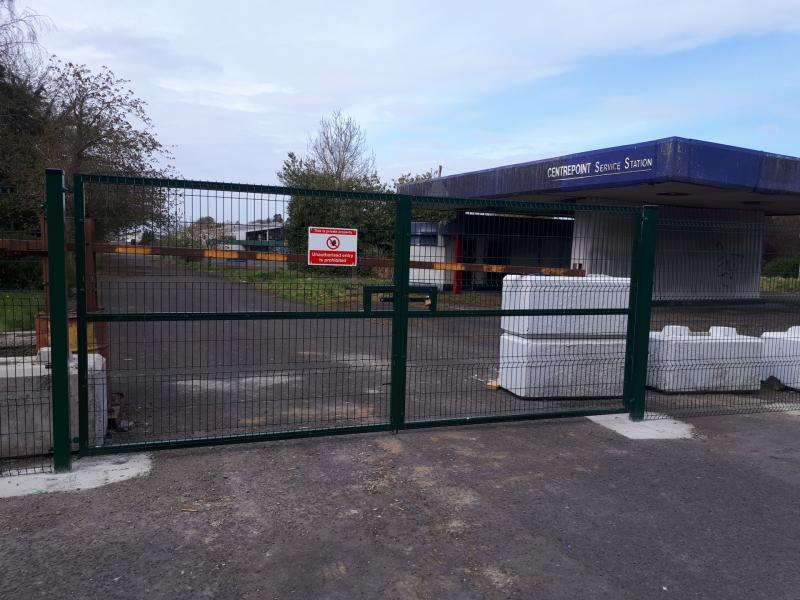 The long road to reclaiming a valuable key property in Portlaoise from vandals so that can be developed for housing took a step forward.

Security work commenced at the vandalised Centrepoint building in Portlaoise and Laois County Council has also confirmed that it is to move to have the site declared derelict which would give the local authority the right to force the owner to sell.

Some work is underway to secure the derelict Centrepoint shopping centre in Portlaoise which has become a magnet for anti-social behaviour.

The Council confirmed that a notice was served on the owner and work has commenced securing the overall site.

Additional huge concrete barriers have been installed at the Mountrath Road entrance with metal support for fencing also installed. A metal gate has also been erected with fencing installed.

However, the building itself remains unsecured.

Council officials and County Laois Fire and Rescue Service inspected the buildings and property at the end of March after disused prefabs were gutted in a fire.

The council said it is also taking other action.

“The Planning Authority served notices on the owners of the Centrepoint property of the intention to enter the site on to the Derelict Sites Register which commences that process,” it told the Leinster Express.

The council said the owners have been given 14 days from April 1 to respond.

“The necessary appropriate action will commence thereafter once this time period has expired and will depend on the response or not received.

“Concurrently the Water Services Section has served notice of works to be carried out under Dangerous Structures legislation and subsequently works commenced on-site on Tuesday morning 7th April, involving the erection of fence posts to the front of the site and rehanging of rear gates.

“There does not appear to have been any removal of waste or works undertaken on the structures from recent inspections. Works it would appear have not been completed yet and owners have been cooperative in discussions to date,” said the council which declined to name the owners of the premises which is already on the Vacant Sites Register.

- Prosecute owners who do not comply with notices served

- Carry out necessary work and charge the owners for the cost.

There have been calls for it to be knocked or at least made secure.

The property was declared vacant in 2019 after An Bord Pleanála inspector described it as ruinous.