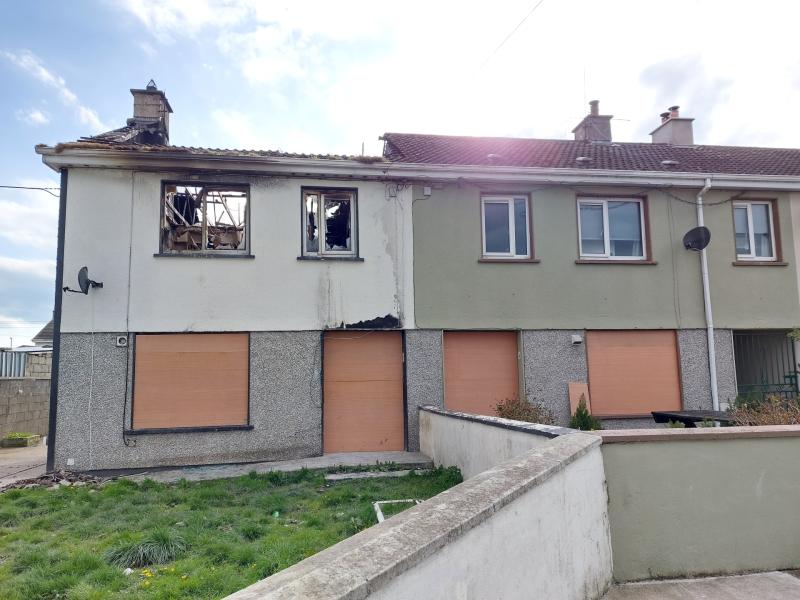 A double house fire in Portlaoise last week has left two families without homes, and houses reportedly in danger of collapse.

Luckily nobody was injured in the fires in two adjoined houses in the Lake Glen housing estate which happened during the night of Wednesday and Thursday, April 20 and 21.

The fire is now under Laois Garda investigation.

It is understood to have spread from one house to the other.

A Garda spokesperson confirmed details to the Leinster Express.

“The fire happened in the early hours of Thursday morning April 21.The fire services attended and the scene was preserved for examination. The second house suffered smoke and fire damage. No-one was injured thankfully.

“An investigation is ongoing and we are keeping an open mind as to the cause. We would appreciate if anyone with information can contact us,” the Garda spokesperson said.

Cllr Caroline Dwane Stanley is worried that there is danger of building collapse.

She raised her concerns speaking at the monthly meeting of Laois County Council on Monday, April 25.

“Last week two houses were burnt out in Lake Glen, it left two families displaced. There is a Garda investigation.

“I’m no engineer but when I look at the house, the chimney seems to be just hanging on. I know you had staff out to look at it. It’s looking like it needs to be knocked before someone gets injured.

“What’s going to happen? Will the both be demolished? Once the site is made safe following the Garda investigation?,” Cllr Dwane Stanley said.

“Specialist engineers have looked at the possibility of propping the gable. We will be going to visit the site,” she said.