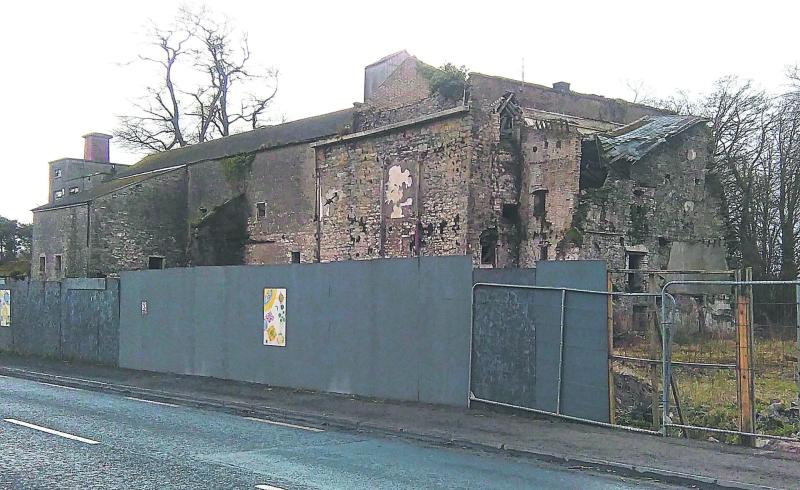 The property before Laois County Council spent €80,000 on a wall to replace hoarding

No plan or money exists to redevelop a landmark Laois building that which has been labelled a eyesore also undermines the Laois County Council’s role in policing dereliction because it owns the property.

The status and future of the Malthouse on the N80 Portlaoise road in Mountmellick, which was the subject of a Celtic Tiger development, was raised by Cllr Paddy Bracken with the council. He called for action when he highlighted the issue at the Borris-in-Ossory Mountmellick Municipal District December meeting.

The Fianna Fáil councillor tabled a motion seeking an update on what plans there are for the Council-owned property at Irishtown.

In a written reply, Ms. Angela McEvoy, Acting/Director of Services, said the Maltings building is important to the heritage of Mountmellick. She outlined the general aim.

“The Council is keen to ensure an appropriate mix of uses which can benefit the community  as a whole will be considered and designed for,” she said.

However, the Director was not in a position to outline a development plan.

“The Maltings building is a protected structure and so requires the necessary conservation expertise to inform future proposals in relation to its reuse and redevelopment,” she said.

Money will also be an issue.

“Funding options in relation to its future use will have to be explored depending on the use identified,” she said.

Cllr Bracken was dissatisfied with the state of play.

“It is a derelict site that is disgraceful on the way into Mountmellick,”  he said.

He claimed the council has owned the building for some time but there has been no progress since an apartment development fell victim to the property and banking crash.

“Nothing has been done...It is nothing but a ruin and blight on the town. It is in a total state of dereliction,” he said.

Cllr Bracken said the lack of action undermines the council role in pursuing the owners of private properties that have fallen apart.

“We own this site and nothing has been done...It is an eyesore. Money was spent on a wall but the council should move to do something with it,” he said.

He added that it is unbelievable that the council is looking for sites for housing while the council owns this site.

“It’s like this for a number of years and needs attention,” he said.

“It’s one of the first things you see coming into Mountmellick and it gives a bad vibe,” said Cllr Clooney.

The historic factory was opened a century ago by the Codd family, producing malt for the drinks industry and fortified malt as a health supplement, up until about 2001.

During th Celtic Tiger, the Maltings was earmarked to become a luxurious apartment block. A developer received planning approval for 37 one and two bedroom apartments. The site was partially demolished at the time.

A total of 20 apartments were off the plans, promising them to be “noiseless, spacious and bright with cutting edge technology” with the historic site preserved and an “ancient garden” restored.

The site later went into the books of the National Asset Management Agency.

The Leinster Express reported in 2017 that Laois County Council would spend €80,000  to erect a permanent stone wall topped with metal railings around the property.

It is not clear how the property came into public ownership.