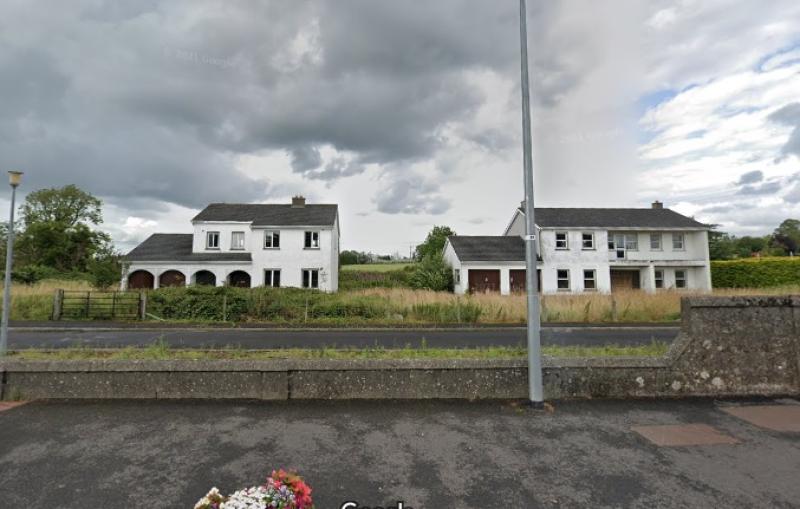 Two large houses built over 30 years ago in Portlaoise but never lived in, may soon be demolished but it's not quite clear if it will be for a road or to make way for a higher number of new social homes on the site.

The pair of houses are on the Stradbally Road, blocking what was once planned to be a connecting road between Beladd and the Dublin Road, exiting at the Fielbrook housing estate. It would traverse land owned by the Health Service Executive.

Laois County Council has confirmed that its Compulsory Purchase Order for the houses is now complete. In their submission to An Bord Pleanála which gave the green light to the forced sale, the council explained that the buildings would be  knocked and replaced with new homes.

In July 2021, the appeals board ruled in favour of the council in the CPO from Mr Brendan Duffy. The proess begin in 2019.

"The Local Authority have demonstrated a pressing need for the increase of social housing provision in the Portlaoise area, and the acquisition of long-standing unfinished, vacant and derelict properties for such social housing purposes is consistent with both National and County level policies and objectives as expressed in the Rebuilding Ireland: Action Plan for Housing and Homelessness 2016, the Laois County Development Plan 2017-2023 and the Portlaoise Local Area Plan 2018 - 2024.

"The proposed acquisition would allow for a comprehensive redevelopment and regeneration of an area subject to vacancy and dereliction," said an Inspector's report to An Bord Pleanála.

The future of the buildings was raised by Cllr Catherine Fitzgerald who requested the update, in a motion tabled to the March meeting of Portlaoise Municipal District.

She wants the houses demolished.

"I'd like to see them demolished. They are an eyesore. How they were put up in the first place I don't know. This was to be access from the Stradbally Road to the Dublin Road. It is the ideal place to go through the HSE land. We need to keep that site free for a road. There is so much school traffic. It would be ideal for school cycle lanes. The Block Road is crooked," Cllr Fitzgerald said.

"People were scratching their heads when these two houses went up, given that it was meant to be a continuation of the road. I am glad to hear it is in the council ownership," she said.

Cllr Noel Tuohy agreed the houses have to go but said it is a shame given the housing shortage.

"I feel a bit sad for these two houses with the potential they had. How they got into that state. They are an eyesore and there is another function for that site," he said.

"I agree they are two fine big houses on a prime site. This road was on the agenda for Portlaoise 30 years ago before the population exploded. There was a need for that road before, it was seen as a priority route. It could be a vital part of infrastructure. If it was on the radar 30 years ago it certainly is now," she said.

She added that most of the site should be kept as a green space for Portlaoise, as a state owned "precious" space for the town.

"This is strictly for infrastructure, we should take the minimum we need. The land is zoned only for medical or community use," Cllr Fitzgerald said.

Newly co-opted Cllr Barry Walsh said that not using the land for a road would be "bordering on criminal".

"The existing new ring road, the difference it has made is phenomenal. Not to have this land available to do the same would be bordering on criminal," he said.

The Vacant Homes Officer Gerry Ryan gave a written update to say that from March 9, the council can now "enter and take possession of the properties and secure them".

Portlaoise Town Manager Simon Walton said a private discussion will be held on housing on April 4 including the two homes and the future uses for the site including roads.

The plan for a new road through the HSE lands had been a long standing target of Laois County Council. There was a proposal that ultimately would be part of a chain of link roads that would connect the proposed Northern Orbital Route to the N80 on the Mountmellick side of Portlaoise.