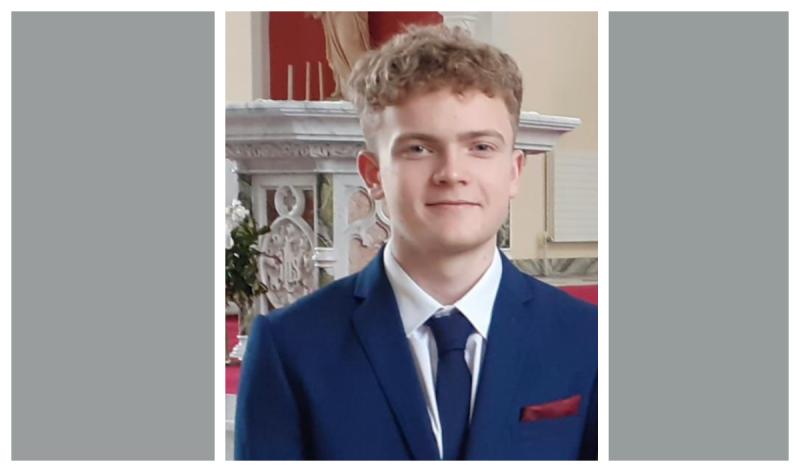 Many tributes have been paid to the young man who died near Portlaoise on the Mountmellick road last weekend.

Named local as Daragh Lee of 8 Grange Hall, Mountmellick, the teenager lost his life after being struck by a van on the N80 sometime around 7.30am on Saturday morning, November 20.

"Darragh you were taken from us way too early. You may be gone from this earth, but never from our hearts. You will be remembered for your huge heart and Bigger smile. You may be gone, but you'll never be forgotten. Sleep with the Angels now. Love always and forever. Sharina, Stephen, Jake and Lara.. Rest in Peace."

Many people send their condolonces to Daragh's family on RIP. They poignant tribute from his friend Mark O'Neill

"The saddest news. It was an absolute honour to know you, let alone having you as a best friend. I do and will miss you so much brother. I’ll never forget you or the memories we’ve made. Rest in peace brother," he wrote.

There were a number of tributes from Mountmellick Community School.

"My deepest sympathy to Daragh’s family, friends, team mates and all who love him dearly at this time. You are in my thoughts and prayers," wrote Joanne Teehan.

Tributes were paid from people involved in soccer including James Kelly of the CCFL.

"Sincere sympathies to the Lee family on the sad passing of Daragh. May he rest in peace," he wrote.

Brian McEvoy left a tribute on behalf of the Emo Celtic U16 team.

"Condolences to Mark and the Lee family from the coaches, players & parents of Emo Celtic U16’s. R.I.P Darragh".

There was also tributes from people who worked with the teenager.

"My heart felt condolences to Darragh's family and friend's at this very very sad and difficult time it was an honour to know and work with Darragh in Supermac's. "Words can't wipe away your tears, hugs won't ease your pain, but hold onto your memories, forever they will remain." R.I.P Darragh," wrote Moira McCarthy.

Tributes were paid from around Mountmellick including from Martin Culleton and family Garoon.

"Deepest sympathy to Mark and all the Lee family on the tragic loss of your beautiful son Darragh. May his gentle soul rest in peace," said the note.

"Deepest sympathy to Lee family on the sad passing of Darragh. May he rest in peace," he wrote.

Tributes were paid from families around Laois and Ireland to the young man.

Funeral arrangements have yet to be confirmed.