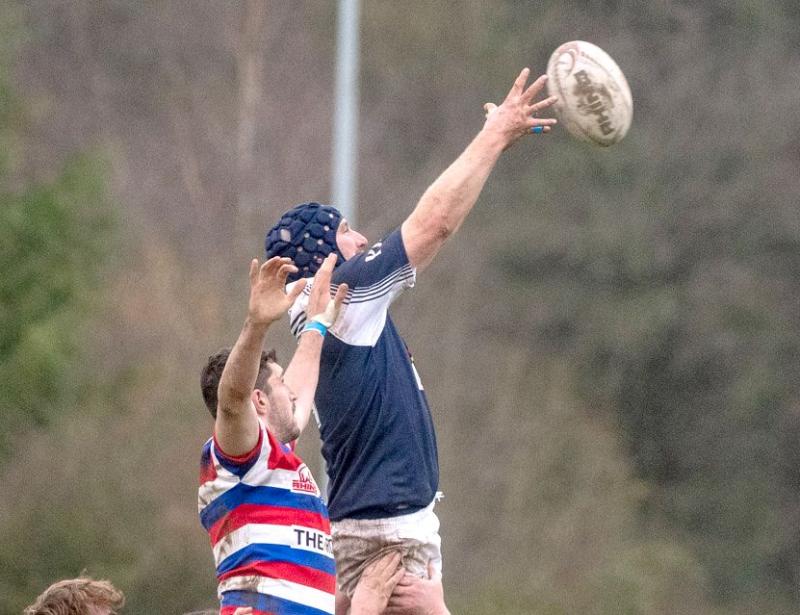 PORTLAOISE 1st XV travelled to Balbriggan on Sunday knowing noting less than a win would suffice if they are to retain their place in Division 2A for next season. And they did just that, but surely did it the hard way.

This win leaves them six points clear of a relegation play-off and ahead of Wexford Wanderers with three games remaining. As with many of their games this year, Portlaoise dominated for large periods of the game but failed to turn that possession into scores.

brilliant game for himself by crashing over the line with virtually the last action of the game for the winning try, his third of the day. For good measure Jack Reddin added the conversion that saw Portlaoise winning by three points.

With the wind in their backs, Portlaoise had started the game well using their power up front, allied to some good kicking by Reddin to drive deep into Balbriggan territory.

But before they could score Balbriggan broke out of defence and for 10 minutes or put a lot of pressure on the visitors' defence. The home side were rewarded when they kicked to the corner from a penalty. From the line out they maulked the ball and eventually crossed the pine and added the conversion.

Portlaoise reacted positively and again worked their way into Balbriggan territory. But it was not all one way traffic. The home went on the offensive at every opportunity but the the Portlaoise defence stood solid with the centre pairing of Niall Keenan and Cillian O'Connor particularly impressive.

The visitors were right back in the game when Redding kicked a penalty to the corner. When the won the lineout Ross Cooper held the ball at the back of the ruck and got the touchdown with Reddin on target with the conversion.

There followed a number of similar scenarios with Portlaoise winning penalties and kicking for the corner each time and eventually the pressure paid off when Cooper crashed over for his second try and again Reddin on target with the conversion to give the visitors a 14-7 lead at half time.

It might have been greater but Portlaoise had a try disallowed from a maul infringement. On the restart, and with wind advantage, Balbriggan piled the pressure on Portlaoise with their outhalf using the conditions to good advantage. From one kicked ahead their winger raced on to the bouncing ball, gathered and ran in for the try to reudce the gap to two points.

With the home side kicking two further penalties Portlaoise were staring defeat in the face but never gave up the battle. Prop Cameron Stewart and with lock Mark Sherlock led the charge and with the other lock, Eoghan Brennan winning some great line out ball Portlaoise kept Balbriggan driven back.

They looked to be on track to scored a try after Sherlock made great ground but his offload close to the line was unfortunately knocked on. And just as the home supporter were ready to start celebrating Portlaoise mounted one last attack. Ryan McEvoy, who had been introduced earlier, threw in a perfect delivery and Portlaoise mauled for the line.

The maul went to ground but Cooper held on to the ball and managed to drive over and get the touchdown. Reddin added the conversion and the final whistle was sounded. The win eases the pressure on Portlaoise but the still face a few very tough outings starting next week when they must travel to Coolmine for a game that was deferred a few weeks back due to Covid.

Their last two games see then play host to Newbridge before travelling to North Kildare.