TAMPA Bay weren’t the only Buccaneers turned over at home on Sunday as Portlaoise gave their best defensive display of the season to win away in Athlone on a fine afternoon for rugby. The home side had topped their league in Connacht
but the visitors came out on top in a tough, physical contest.

Portlaoise started brightly and put a number of phases together as they got a foot hold in the opposition half. Fionn Cuddy, operating at full-back, came into the line to good effect with the midfield of Aaron Fitzpatrick and Daniel Whelan making
strong gains.

The pressure eventually told as scrum-half Paul Byrne fed captain Eanna Moynihan who used his power and pace to break a number of tackles and crash over for the game’s first score. Out-half Matt Cunningham added the extras. Buccaneers were putting up a strong physical challenge but had no answer to Portlaoise's rucking with the front row of Joey McGuinness, Conor Deegan, and Shane Foley always on hand to protect possession and, on several occasions, secure turn over ball.

A scrum against the head saw Portlaoise on the counter attack and a clever kick by Whelan had Buccaneers scrambling but they managed to clear their lines. The relief didn’t last long as they conceded a scrum under the constant pressure. no. 8
Moynihan took the ball off the base of the scrum and attacked the blindside. There was no stopping him as he scored his second try with Cunningham again adding the extras a 14-0 lead. 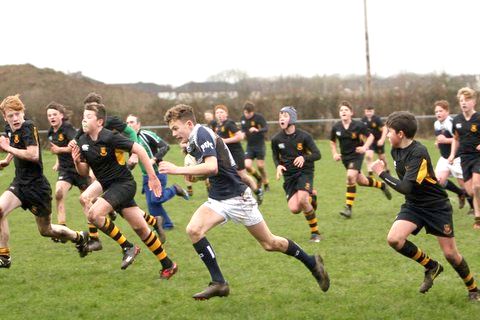 Portlaoise continued to attack with great runs from wing-forwards Zack McGuinness and Donncha Carroll but Buccaneers defended their lines well. Winger Cillian Dunne pressed hard as Cunningham kept the opposition guessing with some well placed kicks but the score remained unchanged as the referee sounded the half time whistle.

The second half saw no let up in the physicality and the second row partnership of Cormac Drea and Bill Rigney dominated the exchanges in open play and were also in control at the set piece. The line speed of the back line gave Buccaneers no breathing space as, time and again, man of the match Daniel Whelan cut off any attacking options.

Cormac Page turned in a fine performance on the wing showing great hands under the high ball and running strongly when the
opportunity presented itself. Another period of sustained pressure paid off for Portlaoise as they put the phases together with Fitzpatrick, Whelan, Deegan, and Foley driving hard at the opposition.

Kyle Moore, in at scrum-half, made a telling contribution and then set Zack McGuinness on his way to cross the white-wash for a converted try to make it 21-0.

The home side did respond shortly afterwards as their outside centre used his pace to go over in the corner to make it 21-5. Fionn Mullen and Ricky Lyons came into the front row and this served to put the pressure back on the home side while
winger Declan Iguma made a number of telling tackles as Portlaoise moved through the gears once more. Carroll won a great turnover ball and took off into the opposition 22. 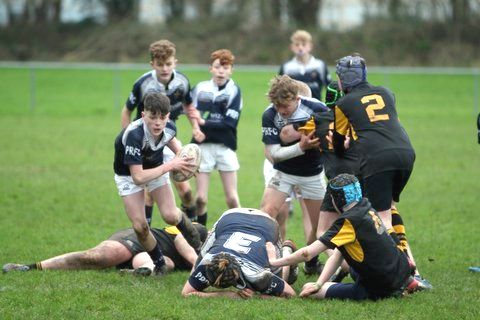 Buccaneers stopped the attack but the relieving kick was gathered well by Page, who spotted McGuinness coming into the line at speed and there was no stopping him as he rounded off the scoring for a 26-5 win. 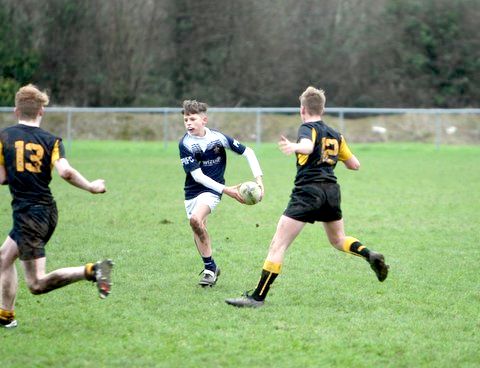