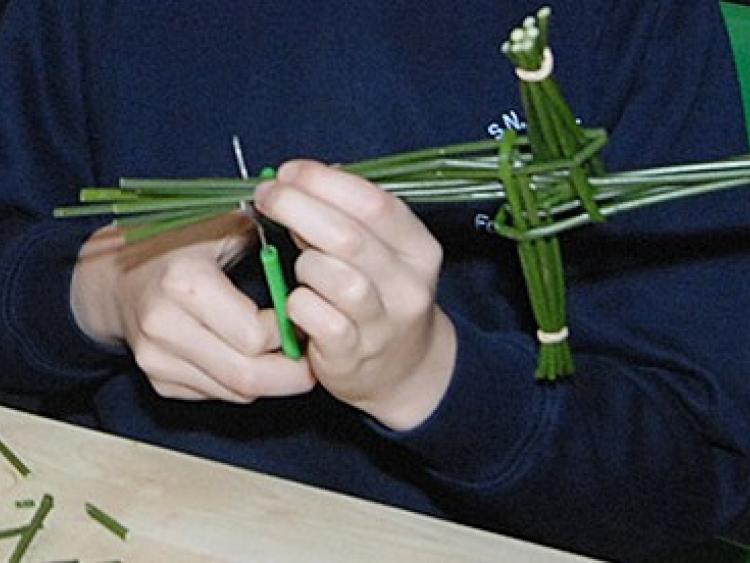 Scoil Bhride in Portlaoise has taken the opportunity to provide simple step-by-step instructions on making a St Bridget's Cross as part of the annual Feast Day on February 1.

Making a St Bridgid's Cross is a custom in Ireland. The Cross is made out of plants called rushes for hanging above the entrances to dwellings to invoke the help of St Bridget in warding off disease.

St Bridget’s Day is celebrated on the 1st February each year and the crosses are made at that time. Rushes were traditionally used to make the St Bridget’s Cross. These were collected from wetlands and cut into pieces, 8-12 inches long.

Rushes can be hard to get for city dwellers so ordinary drinking straws are a good substitute. Use rubber bands to tie up the ends.

What to Do
- Hold one of the reeds vertically. Fold a second reed in half as in the diagram.

- Place the first vertical reed in the centre of the folded second reed.

- Hold the centre overlap tightly between thumb and forefinger.

- Turn the two rushes held together 90 degrees anti-clockwise so that the open ends of the second reed are pointing vertically upwards.

- Fold a third reed in half and over both parts of the second reed to lie horizontally from left to right against the first straw.

- Holding the centre tightly, turn the three reeds 90 degrees anti-clockwise so that the open ends of the third reed are pointing upwards.

-Fold a new reed in half over and across all the rushes pointing upwards.

- Repeat the process of rotating all the rushes 90 degrees anti-clockwise, adding a new folded reed each time until all rushes have been used up to make the cross.
Secure the arms of the cross with elastic bands. Trim the ends to make them all the same length. The St Bridget’s Cross is now ready to hang.

Traditionally the crosses were set over doorways and windows to protect the home from any kind of harm.