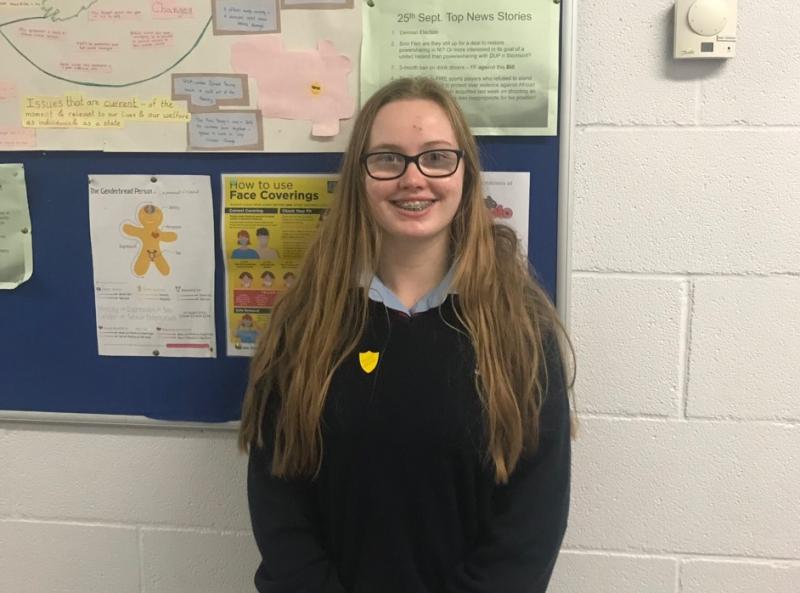 A Mountrath student is set to represent the interests of Laois and Offaly pupils on the Irish Second Level Students’ Union.

The Irish Second Level Students Union is the representative body for second- level students in the Republic of Ireland. Each year, the ISSU elects a Regional Officer from each region. There are 22 regions in Ireland, and our region is Laois Offaly.

The elections took place on November 18 at the ISSU Laois Offaly Regional Councils, which were held virtually due to Covid-19. At this event there were two representatives from each school in Laois and Offaly. Three students nominated themselves for elections. Each candidate had to make a one minute speech, and all attendees got the opportunity to vote.

Courtney aims to now represent, uplift and defend student voice in the region. She will have has the responsibility for organising student council cluster meetings once a month. This involves the chairperson of each student council in the Laois Offaly region meeting to discuss local issues for students.

It will be Courtney's responsibility to promote the work of the ISSU in the and to increase school membership of the ISSU. Schools can opt to be a member of the union, and must abide by their policies. Mountrath Community School is a member. There are 500 member schools in Ireland of the ISSU.

Shout out for youth work volunteers in Laois

All issues/ consultations that Courtney receives from students travel through her to the ISSU’s National Student Executives. These students lead the National Campaigns and execute the work the Union undertakes.

Courtney believes her role is a very important role as student voice in the Laois Offaly region is often excluded from national campaigns, and instead, is more concentrated in cities such as Dublin or Cork.

She adds that ISSU meetings are held in Liberty Hall in Dublin, which isn’t feasible for a lot of students in the region to attend. For this reason, Students in the region are often “turned off” nominating themselves for ISSU positions. Courtney's ultimate goal to establish a meeting quarters in the Laois Offaly Region, so that the region doesn’t get left behind when it comes to student consultation.

Her predecessor was Reuban Murray, a past student of Mountrath Community School. Reuban went on to become president of the ISSU, and led all elected officers through campaigns last year. Courtney will meet with Reuban next week for advice on her new role and to transfer ongoing campaigns.

Her term officially starts in January. On the 15th and 16th of January, Courtney will be meeting with the other Regional Officer Elects from across Ireland. They will undergo a two day training in Dublin City in which our travel, food and accommodation will be covered  for this period.

As the Chairperson of our own Student Council at Mountrath, Courtney was delighted to attend the Regional Councils alongside the Second Year rep Ryan Collins. She was even more delighted to be elected.