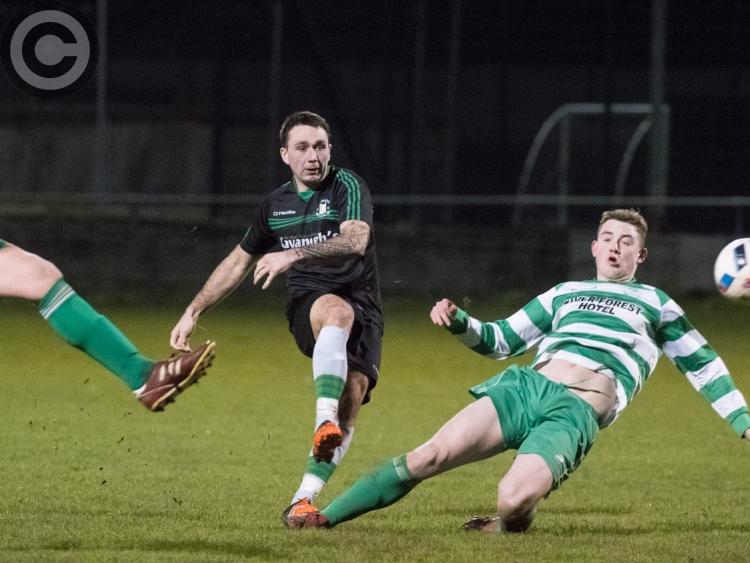 Jody Dillon was on target for Portlaoise AFC at the weekend.

Portlaoise AFC continued their momentum in a push for promotion with a comfortable 3-0 win away to Cabra side Beggsboro on Friday night.

The hosts had pushed Portlaoise all the way when the sides met in February, but on Friday night it was a little more comfortable for Ger Dunne’s side.

Portlaoise had two early chances when Com Coss and Jody Dillon’s strikes from outside the area were too close to goalkeeper Ian Dumbrell but after seven minutes Colm Poole put his side ahead.

Brian Ging won back a throw in and headed to Poole who played first time into Jody Dillon, he found Oisin Fitzpatrick in space and his cut back was buried right footed first time by Poole.

Dillon then did well to win back possession but his effort was well saved by Dumbrell. Beggsboro’s first opportunity fell to Paul Fitzgerald but Sean McCormack was out smartly to save bravely at his feet.

Dunbrell had to be at his best on 21 minutes when Jason Caffrey took a throw in from Fitzpatrick and his volley dipped viciously but the keeper saved superbly. Beggsboro were next to go close when Karem Ali’s cross was headed wide under pressure.

Despite having most of the possession Portlaoise created only one more good chance of the half but Colm Poole’s effort went over while at the other end Alan Kearns should have done better with a header but he was off target.

Portlaoise scored their second goal eight minutes into the second half, a throw in by James Mullaney was headed on by Jody Dillon to Jason Caffrey, the pair exchanged a neat one two and Dillon finished expertly for his 11th goal of the season.

Eoghan White then went close to getting his first of the season but his header was inches over from a Colm Poole free kick on 70 minutes, then Dumbrell made a tremendous save from Dillon to keep the score at 2-0.

From the resulting corner Dumbrell saved well with his feet from Jason Woods, then Colm Coss was just off target following an excellent counter attack.

Beggsboro’s best chance of the second half came late in the game when Martin Cussin’s free kick was brilliantly pushed away by Sean McCormack.

With five minutes to go Portlaoise got their third when Colm Poole won the ball back inside his own half and played a sublime pass to Jody Dillon, he beat two players and finished low past the keeper to seal an excellent away victory for Portlaoise.

Portlaoise now have a massive week to finish their season, first up is a home league game on Wednesday night to fellow promotion chasing Skerries Town FC followed by the Lummy O’Reilly Cup Final on Sunday morning against Edenderry Town and then face Inchicore Athletic, who are also in with a chance of promotion on Wednesday 23rd May in Crumlin.