CAPTAIN KYLIE MURPHY FIRED HOME ONE OF THE GOALS 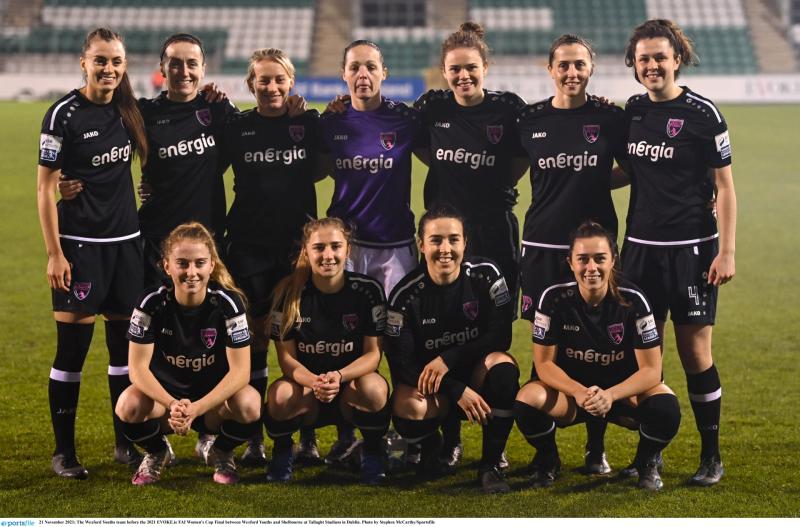 Captain and Graiguecullen native Kylie Murphy bagged the second goal on the night while Ireland U19 International and Portarlington's Della Doherty anchored the defence at centre back.

Behind her was the ever reliable Ciamh Gray in the goals. The Portlaoise native had a fine 90 minutes between the sticks

It was a brilliant victory for all concerned having come into the game as underdogs and with Shelbourne on a high having only won the league a week previously on a dramatic last day of the season.

Speaking to RTE after the game, Captain Kylie Murphy was overjoyed.

"The first half was absolutely terrible," she said. "We didn't perform. It couldn't get much worse... we hadn't implemented our game, we hadn't done what we'd set out to do, we hadn't done anything only let Shelbourne play.

"We weren't at our very best in the second half but we were a lot closer to what this team is.

"It was frustrating. Look at the people who've come to support us; all the reporters, the TV, everything. You want to put on a show so for me, at half-time, it just wasn't good enough. I would have felt the very same if we went in 1-0 up.

"No matter what, performance is what matters. If you perform and you don't get over the line well at least you can look in the mirror and say, 'you know what, I done my best'. But that [first half], it wasn't good enough. We needed to change it."

Speaking about her goal, she was just relieved to see it hit the net.

"I just snapped at it," Murphy said of her goal. "I knew if I tried to put power on it it could have gone anywhere so I tried to get it on target. It kind of came behind me... honestly, my arse hit the floor and I thought, 'oh my God!'. I couldn't believe it went in."