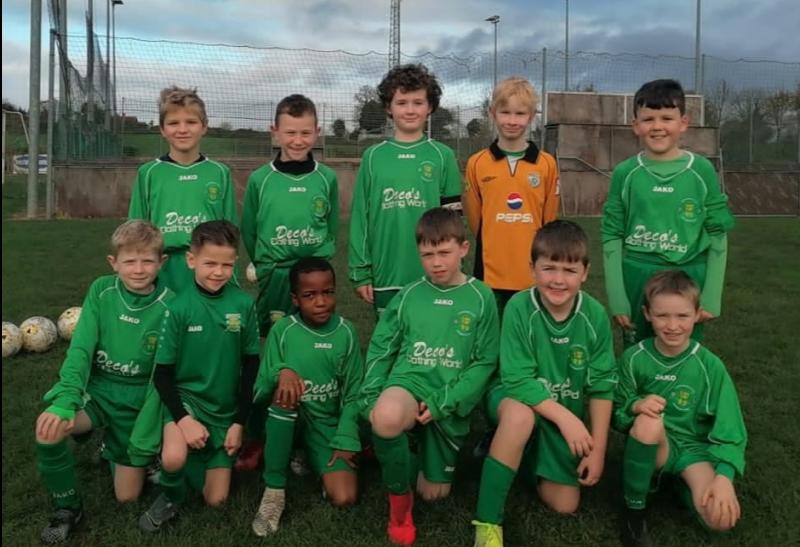 Portlaoise travelled to Abbeyleix last Saturday morning but a switch of venue to Ballyroan altered their preparations The late switch appeared to affect Portlaoise in the opening stages and a strong start from Abbeyleix would see them have the better of the opening exchanges.

Abbeyleix would have the opening chance when two of their players ran through free on the Portlaoise goal. David Kenny in the Portlaoise net, who was making his first ever appearance in goal, stormed off his line to dive on the ball just as the Abbeyleix player was about to put his laces through it.

This would spur Portlaoise into action and they would start to grow into the game and would take the lead in the 12th minute. Andy Cash who was playing up front was chasing down every ball and it was his persistence that allowed him to play in Kian French who spotted an unmarked Harry Brady who coolly side footed the ball into the bottom corner to take his tally to two goals in two games.

Portlaoise would go into the break with a two goal lead when Ronan O'Gorman played a lovely through ball to Ryan Jacob who made it look effortless as he placed the finish past the Abbeyleix keeper.

Abbeyleix would start the second have just as they did the first and immediately put Portlaoise on the back foot. They would make it 2-1 just five minutes. For the second time Portlaoise would have to react to a poor start to a half but this time it would be emphatic. Two quick fire goals in the space of five minutes would make it 4-1.

Zach Bowe was first up and just as he had done last weekend after a mazy solo run found himself with just the keeper to beat but unlike last weekend there would be no mistake this time round as he buried the ball to the back of the net. Then it was the inform Ryan Jacob following some excellent work from Ronan O Gorman who would make it four and bring his personal tally to an impressive five goals in two games.

Abbeyleix would continue to try to unlock the Portlaoise defence but on the day came up against an inspired defensive display from Noah Doran. Noah who was captain on the day would lead his team by example and put in his best shift to date in a Portlaoise Jersey. Time after time he would make block after block followed by clearance after clearance building the foundations for Portlaoise to take the game to Abbeyleix.

Following on the theme from our last game it would again be the first half keeper come second half outfield star that would have a huge say in the game. David Kenny who started the game making a brilliant save in goals would finish the game off with a goal off his own.

David who put in a man of the match performance had been brilliant minding the net for the first half and worked tirelessly outfield throw-out the second half and with two minutes left in the game got the goal his performance deserved after a great pass from Tafara Zhou.

This win was Portlaoise’s third in a row and the confidence is growing within the group which should set them up nicely for the last run of games before the Christmas break.

Man of the match: David Kenny

CAPTAIN KYLIE MURPHY FIRED HOME ONE OF THE GOALS