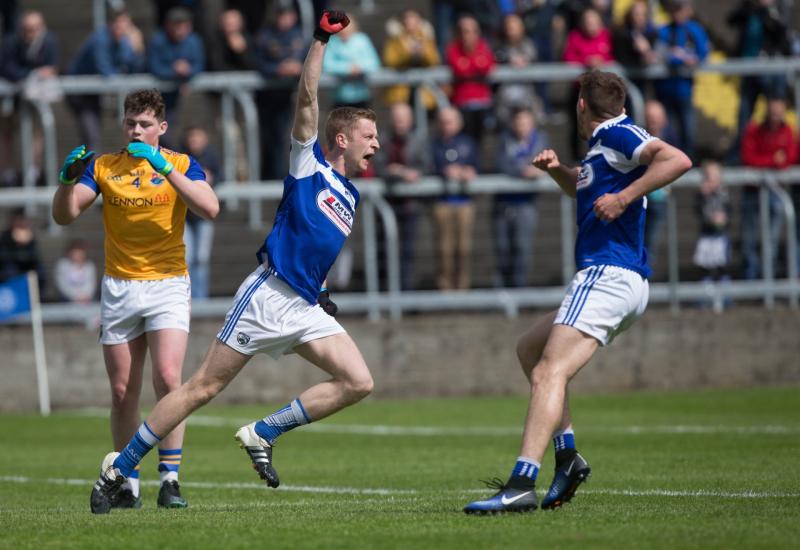 Laois are through to a Leinster SFC quarter-final clash with Kildare, after the convincingly saw off Longford in O'Moore Park on Sunday.

Two goals just before half time, and two more just after it, were the catalysts for the win, as Peter Creedon marked his first championship game in charge with a victory.

Laois were under big pressure coming into the game after their league performances, but they showed no signs of that in the opening minutes.

Niall Donoher fisted over a point with a little over a minute played, and Laois pressed on from there. Evan O'Carroll, Paul Kingston and Donie Kingston (free) all split the posts, as Laois made full use of the wind advantage.

Robbie Smyth responded for Longford with a free, but Donie Kingston added another from play for a rampant Laois side. A Smyth double either side of a Laois point from Eoin Buggie had Laois three ahead, 0-6 to 0-3, and they kept their foot on the throttle.

They hit the next three points to lead by six, and Longford looked to be in all sorts of trouble. Facing into a stiff breeze they were finding scores hard to come by, but they finally hit a purple patch after that.

The excellent Smyth was at the heart of it, as he kicked three and Sean McCormack added another to cut the deficit to just two points, with the home side now looking nervy.

They needed something to settle them back into the game, and John O'Loughlin provided it with a brilliant point off his left, from the left wing.

That score lifted the mood in O'Moore Park, and the Kingston brothers combined to devastating effect before the half time whistle. First Paul and then Donie both rattled the Longford net in the space of a minute, as Laois went from leading by two to holding a nine point advantage at half time, 2-10 to 0-7.

That lead soon swelled thanks to a blistering start to the second half from Laois. In their first real attack, some lovely quick passing ended with Alan Farrell rolling him a third goal.

Two minutes later, some brilliant play from Donie Kingston ended with him putting brother Paul through on goal, and he calmly slotted home his second goal.

That fourth goal sucked killed whatever atmosphere there was in O'Moore Park, and the rest of the game played out like a training game.

Longford never really troubled Laois after that, and the home side just coasted towards the final whistle, as eleven points separated the teams in the end.