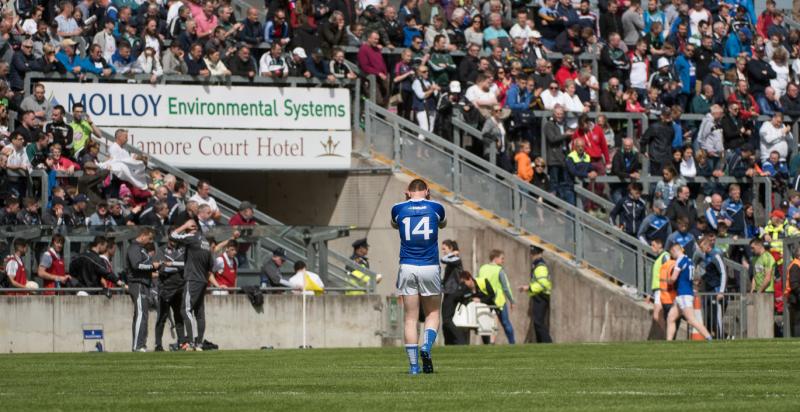 Laois are looking for a new manager.

And so we begin the search once again. A familiar path must be travelled once more for Laois football, as another season of failure has ultimately ended in the departure of another manager.

Peter Creedon's decision not to seek a second term in charge comes after a particlularly charged meeting of the Laois County Board last week. His performance was criticized, the players were criticized and there appeared to be no real appetite, outside of the top table, for him to remain in charge.

Against that backdrop, he has opted to take his name out of the running, fearing any reappointment would be too divisive in the county.

He claimed to have the support of the County Executive and the players, which we have no reason to doubt. The County Executive took the unprecedented step of allowing him address their meeting earlier this month, to give his side of the story on why Laois had such a bad year, and what he felt needed to be done for 2018.

That meeting ended with that Executive happy to afford him another term, as they wanted to seek his opinion on whether he would be interested in staying on, and what he would do if he did.

So, with him no longer an option, who replaces him? What is the task awaiting them?

If Laois wasn't an attractive prospect before, it is even less so now. Chairman Gerry Kavanagh has mentioned repeatedly at county board meetings this year about how hard they found it just to get selectors to work with Creedon.

In the end, his son Gary and Timahoe's Tom McKettrick filled the roles, but it is an indication of how much apathy there is towards football in Laois at the moment that finding people to get involved proved so hard.

Part of that could have been down to the team Creedon brought with him, with potential candidates fearing they might not have much of an input as he brought a number of trusted lieutenants with him. Also, he was an unknown quantity around here, so few of those approached probably knew anything about him.

Whoever replaces him will have the almighty task of trying to unify a fractured and disinterested football public. They will have to plan for a Division 4 campaign with no guarantee of promotion, and decide to either give an ageing panel one last shot at glory, or start a massive overhaul of the senior team.

They will have to deal with a handful of panel members accused of drinking in the run up to games, a panel which never looked fully fit at any stage this year, and who have been left scarred by one heavy defeat after another for the last seven or eight years.

Laois are facing into a period of massive change in the next few months. Gerry Kavanagh's tenure at the top is almost up, and commissioning this appointment will be one of his last acts as chairman. It is not clear yet who will replace him, but the early candidates appear to be any one of Peter O'Neill, Paschal McEvoy, Sean Mortimer or Brian Allen. It will only become clear later in the year which, if any, of those men are interested in the role.

A strategic review committee have to plot a way forward for Laois as they work on a three-to-five year plan for GAA in the county, with their immediate task likely to be identifying ways to prevent Laois' year-on-year decline, and then identifying people to do something about it.

Whoever gets the senior football job for 2018, they will have to be a unifying force - passionate enough to inspire others in the county to get involved, but pragmatic enough to plot a realistic course forward.

Laois are back on a familiar path. The road ahead has never looked more daunting.