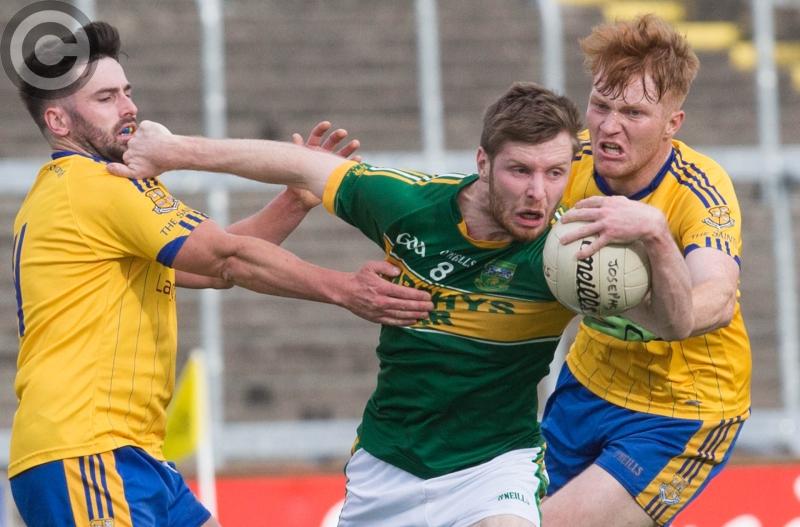 Jamie Farrell on the attack for Ballylinan against St Joseph's. Pic: Alf Harvey

Ballylinan are through to the quarter-finals of the Laois SFC after an impressive win over neighbours St Joseph's in O'Moore Park on Saturday.

Goals from Larry Kealy, Andy McEvoy and Cathail Dunne set them on their way, as St Joseph's just couldn't live with them in the second half.

This clash was certainly an anticipated one, but it took a while to get going, with a couple of injuries to St Joseph's players holding up play early on. Jason Campion eventually opened the scoring with a fine point from distance in the fifth minute, and Gary Walsh replied for Ballylinan from a free.

Walsh then missed a glorious goal chance for Ballylinan, before Andy McEvoy put them ahead for the first time with a point from 21 yards out. Walsh then got a flick to a high ball in, which saw it bounce over the bar, and then Larry Kealy added another as Ballylinan now lead by three, 0-4 to 0-1.

St Joseph's weren't really offering anything in attack during this period, but a Dylan Doyle free woke them from their stupor in the 23rd minute.

Soon after, full-back Tom Dunne found himself haring through on goal, and he had the presence of mind to lay the ball off to Brendan Hickey ten yards out, and he slotted to the bottom of the net.

That score gave St Joseph's a big lift, but Ballylinan were soon ahead again. A slick passing move saw the ball worked to Larry Kealy 12 yards out, and his side-footed finish flashed past Aaron Cooney in the St Joseph's goal.

The Kellyville side were undeterred, and Dan Dunne pointed a free before Campion landed another long range score to level the scores at 1-4 each.

However, Ballylinan would get their noses in front at half time, as Gary Walsh pointed a free in injury time to see them lead 1-5 to 1-4 at the interval.

Cathal Fleming soon had St Joseph's back on level terms, curling over a brilliant point off the outside of his right foot from the right wing in the first minute of the second half. Dan Dunne them boomed over a long range free as St Joseph's went ahead, but Ballylinan wasted little time in regaining the lead.

Gary Walsh's free from the right wing dropped just short, but with no player from St Joseph's able to claim the ball, Andy McEvoy pounced to toe-poke it to the net. Cathail Dunne added a point within seconds and Gary Walsh followed that up with his fourth of the game, as Ballylinan went four ahead.

Jamie Farrell pushed that out to five with a superb point as the pace of the game picked up, and things soon got even better for Ballylinan. Gary Walsh's shot from the edge of the area was blocked, but the ball fell to Cathail Dunne, and cracked a shot into the bottom corner.

Now eight points up, Ballylinan had little time to enjoy it, as Jason Campion punished a mix up in their defence to get a goal back for St Joseph's. Ballylinan didn't panic, with Dunne and Walsh (free) pushing them seven clear with ten minutes to go.

St Joseph's were expected to launch a late comeback, but it never materialised, as Ballylinan tagged on a couple of late points to ease themselves to a well-deserved victory.