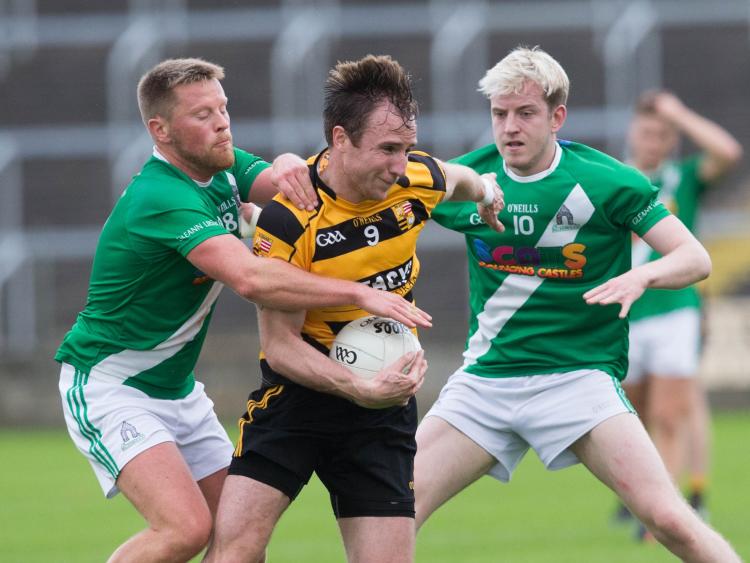 Daithi Carroll found the net for The Heath

In a clash between two sides who were involved in relegation trouble last season, it was a well-organised The Heath outfit who toppled Arles-Kilcruise in Bill Delaney Park to advance to the winners section.

The Heath, playing in their first Championship clash since a relegation final victory against Crettyard, started the first half brightly with Daithí Carroll and James Phelan fired over scores in the opening few minutes.

Former Laois Senior footballer David Conway got Arles-Kilcruise on the scoreboard with a free from the left-hand side. Full-forward Conor Booth, who was causing problems for the Arles-Kilcruise defence all night, responded with two points, one from play and the other a free.

David Conway landed another free in response, as both teams headed in to their respective benches for their first water break of the evening.

Ross Munnelly grabbed the first score after the water break, leaving Arles-Kilcruise taking by one, but after that score The Heath took control of proceedings.

Conor Booth did very well to turn with little space and split the posts from a tight angle. The Heath almost got in for a goal soon after, with Dylan Kavanagh robbing the ball and finding Robbie Ging inside. Despite Ging's effort being well blocked down by Arles-Kilcruise’S Ciaran Lawlor, James Phelan slotted over the rebound.

Robbie Ging did get on the scoresheet minutes later, firing over from close-range, and Conor Booth landed another for The Heath after strong running from Neil Keane.

Arles-Kilcruise did manage the last score of the first half, with Ross Munnelly picking out Liam Whelan with a beautiful ball, and Whelan curled over. The Heath still led 0-8 to 0-4 at half-time.

The Heath showed their intent and intensity upon the restart, as Neil Keane picked up the ball near the middle of the field, and went on a lung-bursting run that ended with him firing over.

David Conway replied with a free that he won himself, but The Heath all but sealed the result with another purple patch.

Two frees from Conor Booth, as well as a lovely outside of the boot effort from substitute Chris Bergin, was followed by the only goal of the game. Some patient and well-worked build-up play from The Heath resulted in Daithí Carroll unleashing a rocket into the back of the Arles-Kilcruise net.

Arles-Kilcruise rallied a bit towards the end, with Ross Munnelly, Fran Egan, Chris O'Donovan and Brendan Conway all raising white flags, but it was The Heath who won't have to worry about relegation this season.