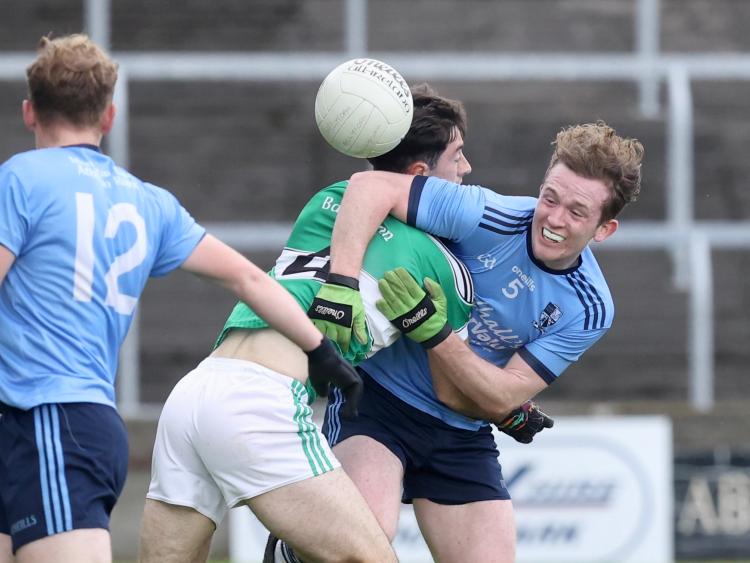 Ballyfin are through to the quarter finals of the Laois senior football championship after they came through a stiff test against Ballyroan-Abbey on Sunday afternoon.

Ballyfin were the better side over the hour but Ballyroan were never far away and even in injury time, they were only a score away from forcing the draw.

James Finn and Aidan Keenaghan provided huge experience for the Ballyfin men while Sean Moore was his brilliant self up front.

Diarmuid Whelan led the Ballyroan charge but they will now go into round three and enter last chance saloon.

Ballyfin had the opening score of the game after just 18 seconds through James Moore and they had that doubled a minute later with Sean Moore getting his first free two minutes later.

Diarmuid Whelan got Ballyroan Abbey off the mark with a free and on 10 minutes they got their noses in front after Shaun Murphy played a lovely ball into Cathal Doyle and the big, imposing midfielder finished coolly to the net to put them 1-1 to 0-3 in front.

They went three up with a Whelan ’45’ and a lovely effort from Aaron McEvoy but Sean Moore at the other end was keeping Ballyfin right on their tails.

With 10 minutes left to half time, Ballyfin wrestled back control of the game. Fresh from a transfer from Offaly champions Ferbane at the start of the year, wing forward Aidan Keenaghan cut through on a meandering run and found the net to put his side into the lead 1-5 to 1-3.

Whelan got another free back but with the last kick of the half, a high ball in on top of James Finn broke and Finn managed to get his body over it and bundle the ball over the line for Ballyfin’s second goal as they led 2-5 to 1-4 at half time.

Diarmuid Whelan came out in the second half like a man with a point to prove and he kicked the opening two points of the half to bring it back to a two point game.

Sean Moore responded with a superbly taken score but just as it looked like Ballyfin might pull away, Ballyroan Abbey were awarded what looked like a soft and dubious penalty.

Diarmuid Whelan stepped up and although Robert Foran saved it, the rebound fell back into the path of Whelan and he found the net with the rebound.

Now level at 2-7 each, it was game on. Moore edged Ballyfin ahead just before the water break while a first for Louis Duff sent them two clear with seven minutes of normal time to play.

The closing stages were tense and when Diarmuid Whelan floated over a lovely score off his left foot, only a point separated the sides.

With five minutes of injury time to be played, who would make their move first? It was Ballyfin and James Finn who sailed over a free from 45 metres to edge them two in front.

Sean Moore landed another with seconds to go as Ballyfin marched on by three points.