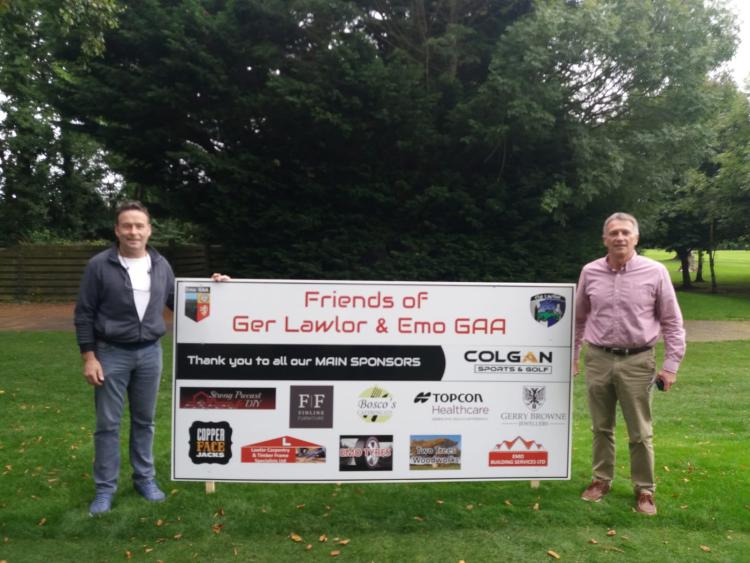 The true GAA community spirit was alive and well on Thursday 10th and Friday 11th of September last as over 300 golfers lined out in Portarlington Golf Club for the Ger Lawlor open scramble fundraiser.

Ger Lawlor was a great servant to Laois GAA both in playing and various management roles and is a proud Emo man, a club where he also enjoyed a lot of success.

Now based in Clare, he suffered a major stroke recently and a group known as 'the friends of Ger Lawlor' came together to raise much needed funds for his ongoing care needs.

There was a great response, particularly from the GAA community locally, and from GAA personnel in Offaly, Kildare, Meath, Dublin, Limerick, Clare and Roscommon.

84 teams, with four players on each team, took part over the two days with the golf classic along with contributions and donations from individuals raising over 40,000 euro.

Ger’s wife, Majella along with members of her family and Ger’s son, Ross, attended on Friday, and were very grateful to all those who had supported the fundraiser.

In the coming weeks, the committee also proposes to hold an online raffle for a number of other prizes that were kindly donated.

Chairman of the organising committee Colm Browne, on behalf of the committee, said:

"We would like to thank all those who made the fundraiser such a success: our main sponsors, our team and tee sponsors, and all those who bought tickets for the raffle. Thanks also to all those other individuals and organisations who, though not directly involved in the golf event, were kind enough to make a financial contribution to the fund. We greatly appreciate the support and generosity of all."

The full results of the golf classic were as follows

Sponsors’ prize of round of golf for four in Mount Juliet (from Mason, Hayes & Curran Solicitors) - won by Gerry Conroy